A key U.S. senator believes “it’s time to close the deal” on a marijuana reform package that he says will include provisions to protect banks that work with state-legal cannabis businesses, as well as equity components to build support from lawmakers who have held out for broader justice-focused change. However, a key financial services regulator is tempering expectations about the prospects of Congress getting the job done this session.

Sen. Jeff Merkley (D-OR), the sponsor of the standalone Secure and Fair Enforcement (SAFE) Banking Act, spoke at the PBC Conference on Thursday, discussing the so-called “SAFE Banking Plus” bill that sources say is near completion following bicameral and bipartisan talks.

While the final text has not been released—and Sen. Cory Booker (D-NJ) previously said that the marijuana omnibus legislation likely wouldn’t be advanced until after the November midterm elections—Merkley said that proposals to facilitate expungements of cannabis convictions (specifically those that occurred in now-legal states) and fund community grant and reinvestment programs are expected to be included. 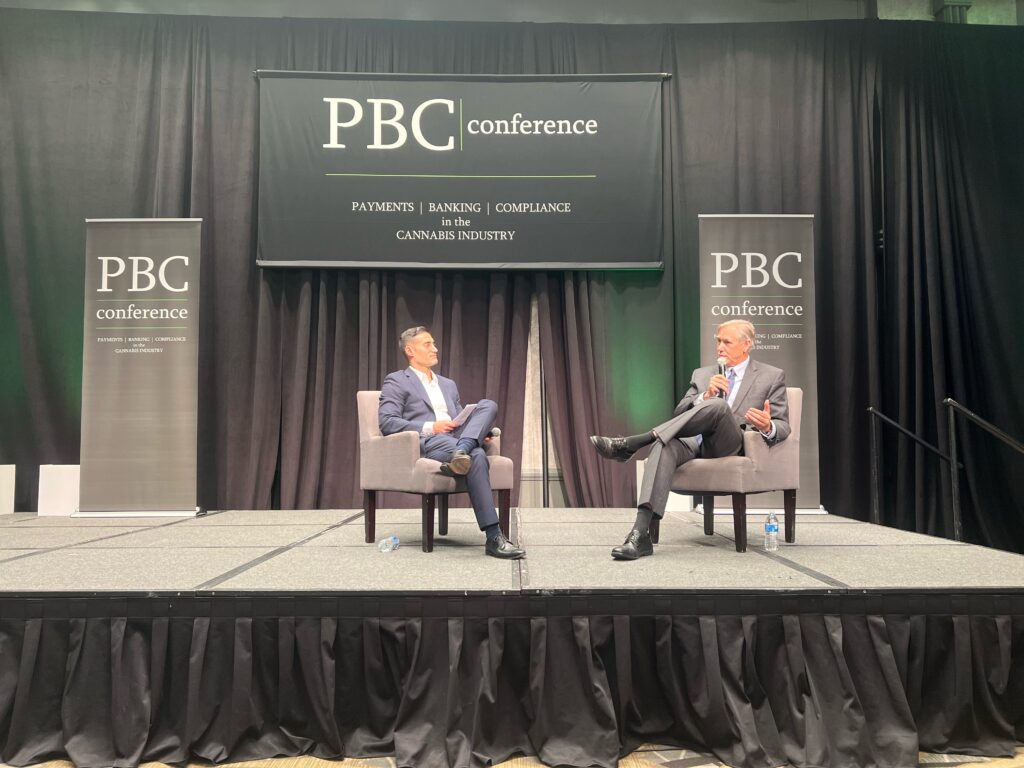 That would help address pushback from advocates over the standalone SAFE Banking Act, which is viewed as principally favorable to large industry interests without deliberately addressing concerns about equity in the market.

Senate Majority Leader Chuck Schumer (D-NY) and Booker have made clear that they aren’t willing to advance the SAFE Banking Act as drafted, even though the bill has cleared the House in some form seven times. The two senators, along with Senate Finance Committee Chairman Ron Wyden (D-OR), filed a large-scale legalization bill in July, but there are serious doubts about the prospects of advancing that through the Senate with the required 60-vote threshold.

Schumer and Booker have more openly embraced the idea of a “compromise” as the leader has worked to build consensus on the alternative package of incremental reforms. Those talks have included Rep. Dave Joyce (R-OH) and other lawmakers from both parties and both chambers.

Attendees of the PBC chat, as well as conference staff, told Marijuana Moment that Merkley provided basic details about the “Plus” part of the pending legislation at the event and encouraged business leaders to reach out to Senate officials and urge them to get a decision memo before undecided lawmakers to show support for the reform proposal.

“It’s time to close the deal in SAFE Banking Plus,” the senator said, according to Business Insider reporter Jeremey Berke. “No one has paid a political price ever for supporting cannabis in this country.”

“No one has paid a political price ever for supporting cannabis in this country.”

Berke also noted that Merkley expressed frustration that some lawmakers who “should be allies have been obstacles” to enacting the incremental reform because they’ve been holding out for more.

Says these are elements that can carry both Republicans and Democrats. Says folks who “should be allies have been obstacles” when it comes to supporting SAFE Banking because of the lack of equity provisions.

While the tone that Merkley set was optimistic, others are less confident that there’s enough time left to pass the marijuana package this session. Rodney Hood, a former chairman of the National Credit Union Administration (NCUA) and current board member of the agency, also spoke at the PBC Conference on Wednesday and said he’d “be surprised if Congress moved on this issue this year.”

“It’s not impossible, but the available time grows short,” he said. “We’re just a few weeks away from midterm elections, so we’re very likely looking at next year, at the earliest.”

“It is essential that Congress take legislative action to clarify and harmonize the laws and regulations surrounding the state-legal cannabis industry and marijuana-related businesses, so the industry can take part in the legitimate financial services industry,” he added. “That was my message last year, and I wish that I could say that we’ve seen great progress toward reform. But unfortunately, I’m not sure that’s the case.”

Hood, who has routinely talked about the need for federal cannabis reform, again praised states like Pennsylvania and New York that have independently taken steps to enact legislation to normalize marijuana banking while Congress stalls.

He also said that “in the federal executive branch, most financial regulators are preparing for when Congress does pass some form of legislation.”

“At my agency, the NCUA, for example, we have an internal working group focused on cannabis issues, and they’re laying the groundwork for the future,” he said. “We also plan to host an NCUA roundtable for examiners and industry leaders to share information and discuss key challenges related to doing business with [marijuana-related businesses], so we’re doing what we can.”

He also suggested forming an interagency working group of federal financial regulatory agencies so that regulators “can have a clear channel for communicating and coordinating our actions,” which would “be a significant step forward in terms of harmonizing our efforts across the executive branch.”

Meanwhile, the Senate came back into session this week following the August recess. At a press briefing on Wednesday, Schumer talked about plans to advance certain bills in the coming weeks, but he did not specifically mention any cannabis-related legislation.

“We want to thank Senator Merkley for his keynote speech today. Having Senator Merkley here in person at PBC Conference 2022 shows how important cannabis banking is to the senator,” Joshua Radbod, CEO of PBC Conference, said in a statement to Marijuana Moment. “Momentum is building and PBC is proud to bring together government and industry leaders to help address cannabis payments, banking, and compliance challenges.”

According to a poll from Independent Community Bankers of America (ICBA) that was released this week, a majority of American voters (65 percent) support allowing banks to work with state-legal marijuana businesses—and most people believe it will both improve public safety and promote social equity.

The survey results are consistent with the findings of a separate poll from the American Bankers Association (ABA) that was released in March. It also showed that 65 percent of Americans back the marijuana banking reform.

Cannabis Regulators of Color Coalition (CRCC) released a paper last month that outlined what they view as shortcomings of the standalone SAFE Banking Act and recommended several amendments to bolster its equity impact.

Booker said at an event organized by CRCC last month that the standalone legislation “requires changes” if it’s going to advance before cannabis is federally legalized.

The senator initially signaled that he was coming around to marijuana banking reform (contingent on equity provisions) at a Senate Judiciary subcommittee hearing in July that he convened as chairman.

Meanwhile, the bicameral sponsors of the SAFE Banking Act, Reps. Ed Perlmutter (D-CO) and Merkley, laid out next steps for the cannabis banking reform at a briefing organized by the U.S. Cannabis Council (USCC) in July.

Also at that briefing, Rep. Earl Blumenauer (D-OR) said that he recently spoke with Booker about the pathway for marijuana reform this session, and they had a “great conversation” about finding areas of compromise.

“I think the senator is fully aware of the consequences of this failed policy of prohibition in terms of what it does with the SAFE Banking Act and the threat that is made to the very communities he wants to support,” the congressman said in response to a question from Marijuana Moment. “I think he’s trying to be able to thread the needle.”

Perlmutter also said in a recent interview that he feels the introduction of the Senate legalization bill alone means that lawmakers have overcome a legislative “hurdle” that’s kept SAFE Banking from advancing in the chamber.

Congressman Says Psychedelics Can Be A Therapeutic ‘Game Changer,’ But Other Lawmakers’ Resistance Is ‘Embarrassing’