Scientists injected people with pure THC and gave them a series of tests to learn how marijuana affects basic motor functions.

What, you don’t normally consume cannabis intravenously? Moving on…

With a majority of states having passed laws legalizing marijuana in some form, there’s strong interest in determining how its components impact motor skills. To that end, researchers at Yale School of Medicine recruited 23 former cannabis consumers, administered low- and high-THC infusions and and had them perform several psychomotor tests.

The results, released online on Wednesday, are set to be published in the Journal of Psychopharmacology.

What the researchers found is generally consistent with earlier studies: the THC infusion “resulted in robust and significant deficits in motor performance” in a dose-dependent manner.

There was one test—where participants were asked to recognize a numeric sequence displayed on a screen and then press a response pad—that showed no significant difference in performance with or without THC. But when it comes to fine motor skills and response time, the study showed evidence that THC impaired the participants. The higher dose (0.03 mg/kg) led to poorer performance compared to the low dose (0.015 mg/kg).

The dosing was based on previous research into the blood plasma concentration of THC after smoking a standard joint. The higher dose is roughly equivalent to three-quarters of a joint and the lower dose is equivalent to one-quarter of a joint, according to the study.

Impairment from THC has been soundly established in earlier research. But what stood out to the researchers wasn’t that THC seemed to impair psychomotor skills; it was that participants who received the low and high dose THC reported feeling equally high. 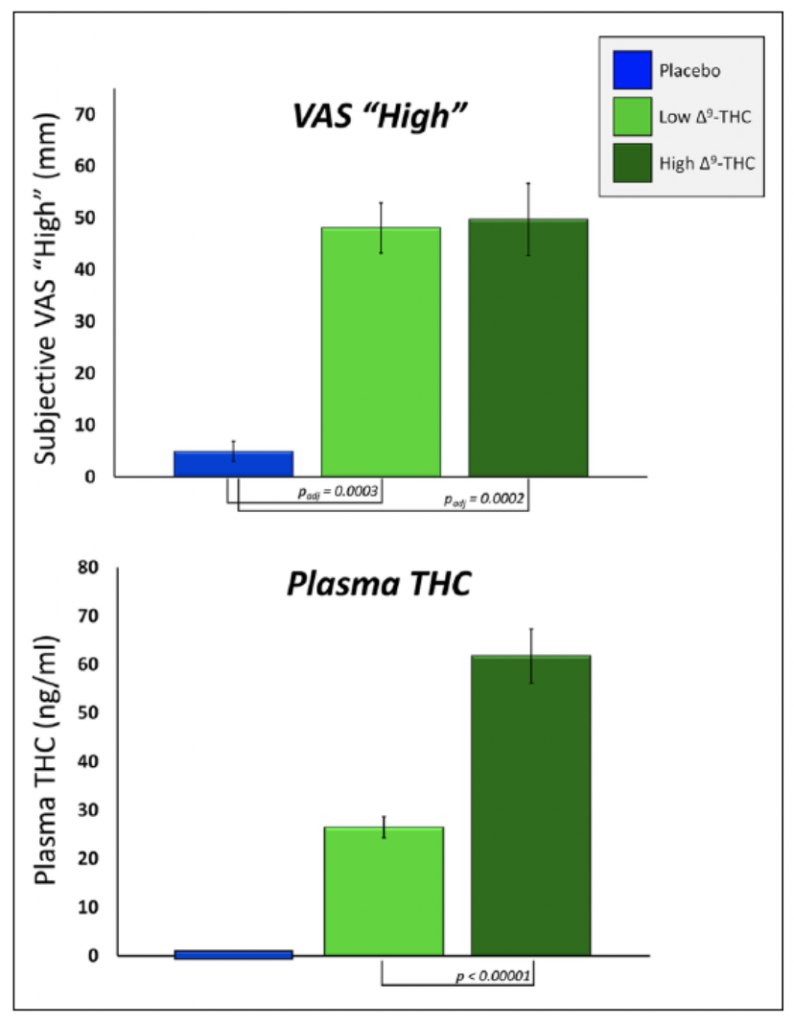 Via the Journal of Psychopharmacology.

“Perhaps even more concerning is the fact that even though the high dose of THC produced greater psychomotor deficits, subjects were not able to distinguish between levels of intoxication across the low- and high-dose conditions. This suggests that it may be difficult for individuals to gauge their level of psychomotor impairment based upon subjective feelings of intoxication, which could lead to greater risk during psychomotor-dependent behaviors.”

The subjective self-reports seemed to reinforce the idea that the “high” effects “plateau with increased doses of THC, while subjective alertness and postural sway continue to worsen.”

“Taken together, these data suggest that while several domains of motor function are disrupted by THC, subjective feelings of intoxication are dissociable from cannabinoid-induced psychomotor effects,” the researchers wrote.

There were a couple limitations to the study. First, it was designed to test how THC alone impacts motor function, whereas most consumers are exposed to numerous cannabinoids, including CBD, when they use marijuana. Second, the participants hadn’t used cannabis in at least the past three months, which means the effects were likely more pronounced than they would be in a frequent users whose developed a tolerance.

“These limitations notwithstanding, to our knowledge, this is the first controlled study examining a range of psychomotor functions in humans during the administration of several doses of IV THC,” the researchers wrote.

“These results suggest that THC exhibits robust effects on fine motor control and motor timing in a dose-dependent manner, which have implications for real world psychomotor-dependent behaviors such as driving, weapon use, operating machinery, work-related tasks, and skilled labor.”

(The researchers each reported potential conflicts of interest, including receiving grants from major pharmaceutical companies.)

A Complete History of Marijuana, According To Scientists