New studies on marijuana are churned out nearly every day, with most of them focusing on novel findings about the plant’s therapeutic potential and the implications of legalization.

But cannabis itself isn’t new. Far from it. And a study published this month in the Journal of Ethnopharmacology documents the fascinating evolution of humanity’s relationship with marijuana over the course of thousands of years of history.

Researchers compiled a trove of documents from around the world and examined earlier studies in order to “provide a critical and comprehensive evaluation, from the ancient times to our days, of the ethnological, botanical, chemical and pharmacological aspects of [cannabis], with a vision for promoting further pharmaceutical research to explore its complete potential as a therapeutic agent.”

There’s a lot to learn from the paper. Here are a few things that stood out. 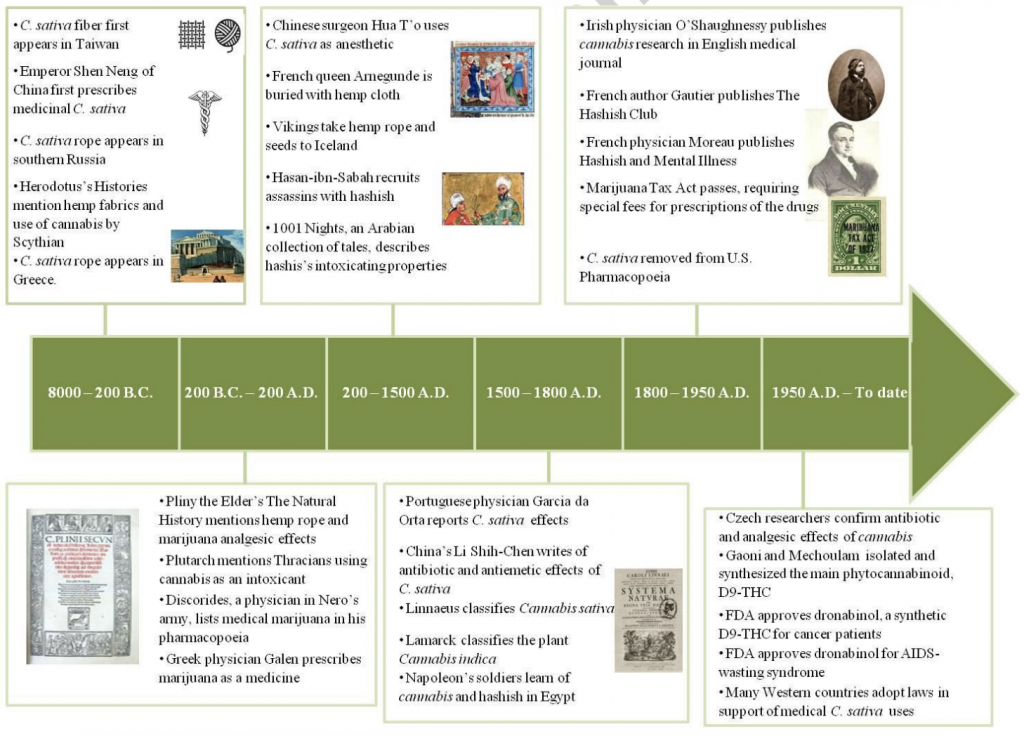 Via the Journal of Ethnopharmacology.

Where does cannabis come from?

Central Asia and Southeast Asia are considered the regions where the plant originated. It’s also where cannabis was domesticated. The regions are “believed to play a vital role in its evolution,” according to the study.

What was it used for?

Before its medical properties became known, the fibrous plant was commonly used for textile manufacturing. Archeologists have discovered “sophisticated plaited basketry” based on cannabis at Czech Palaeolithic sites, for example.

“In fact, it has been referred to as the oldest known cultivated fibre plant and even today it is used as a constituent of fishing nets,” the researchers, who are from Italy and Sweden, wrote.

How did people discover its potential as a recreational botanical? 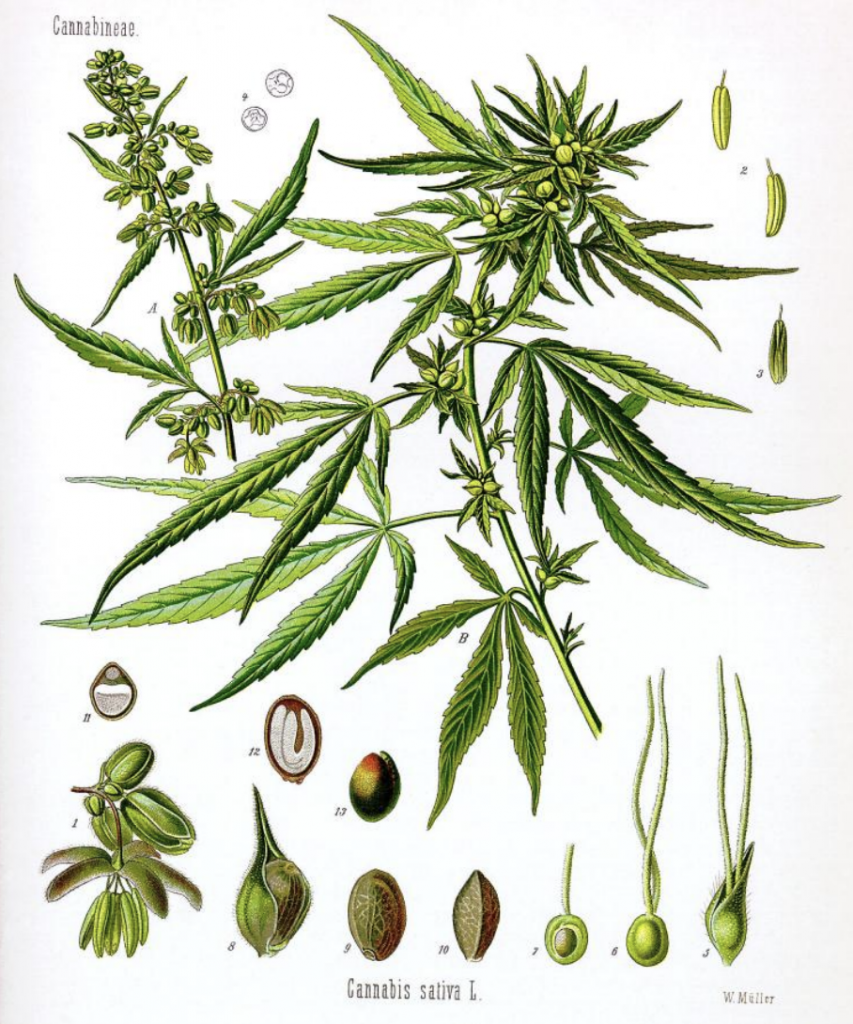 Via the Journal of Ethnopharmacology.

There are a couple schools of thought on this topic. But from a “Western-centered viewpoint,” researchers generally believe that natural events caused the plant to be accidentally burned, inadvertently revealing its “psychotropic nature.”

Where has cannabis been featured in religion?

All over the place, apparently. Religious texts where marijuana is referenced span from the Old Testament, where it was seemingly mentioned as an “incense and sacred oil,” to Hinduism and tantric Buddhism, where the plant was once believed to “facilitate the meditation and communication with the spirits,” according to the new paper.

When was marijuana first used as medicine?

There’s certainly room for debate on this, but the researchers said that the timeline started about 5,000 years ago in China. The so-called “father” of Chinese agriculture, emperor Chen Nung, included the plant in the first Chinese pharmacopeia. That text said cannabis was prescribed for “fatigue, rheumatism and malaria.” 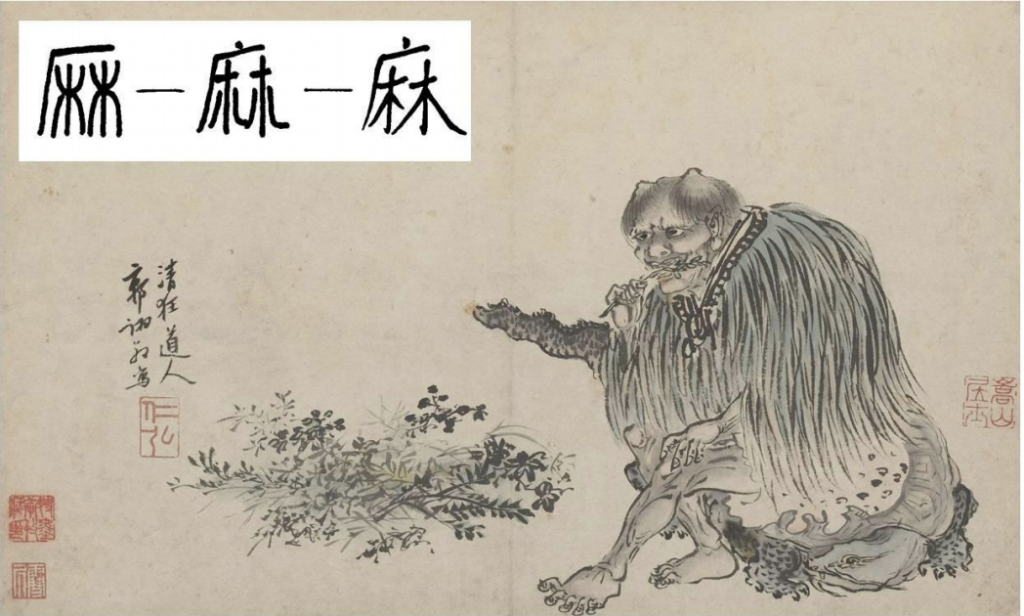 Via the Journal of Ethnophamacology.

“Moreover, Chinese physicians used the seeds of [cannabis] mainly for their vegetal oils and proteins.”

When did cannabis first appear in the Americas?

Marijuana didn’t show up on American shores for thousands of years after it was first discovered. It was “not known in the Americas until the arrival and settlement of the first European colonists,” according to the researchers. “During this period [cannabis] was used primarily for the strength and the resistance of its fibres.”

“Indeed, the Spanish and English colonies in the Americas mainly imported the botanical varieties ideal for textile manufacturing.”

What are the origins of prohibition?

In 1484, Pope Innocent VIII issued a “papal bull” that denounced both witchcraft and the use of marijuana. Of course, the bulk of prohibitionary policies were introduced in the 20th century—with the “Marijuana Tax Act” in the United States in 1937 and an Act of Parliament in the United Kingdom in 1971.

Where did the name “Cannabis sativa” come from?

Swedish botanist Carl Linnaeus coined the term “Cannabis sativa” in the middle of the 18th century, the researchers wrote. Subsequently, French naturalist Jean Lamark distinguished between Cannabis sativa and Cannabis indica, writing that the former was a European plant and the latter came from “Indian origin varieties.”

Marijuana Looks Like An Alien World Under An Electron Microscope