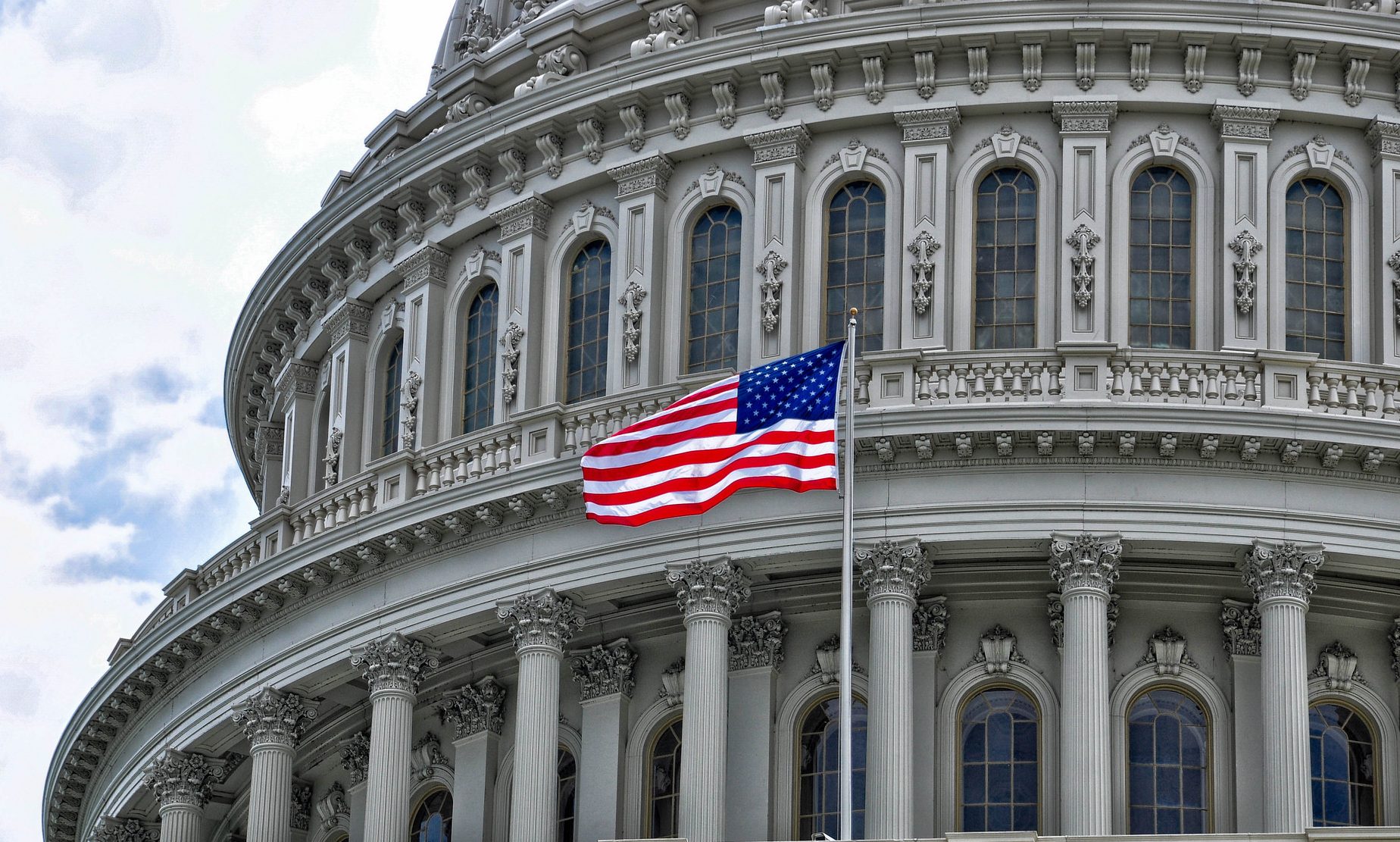 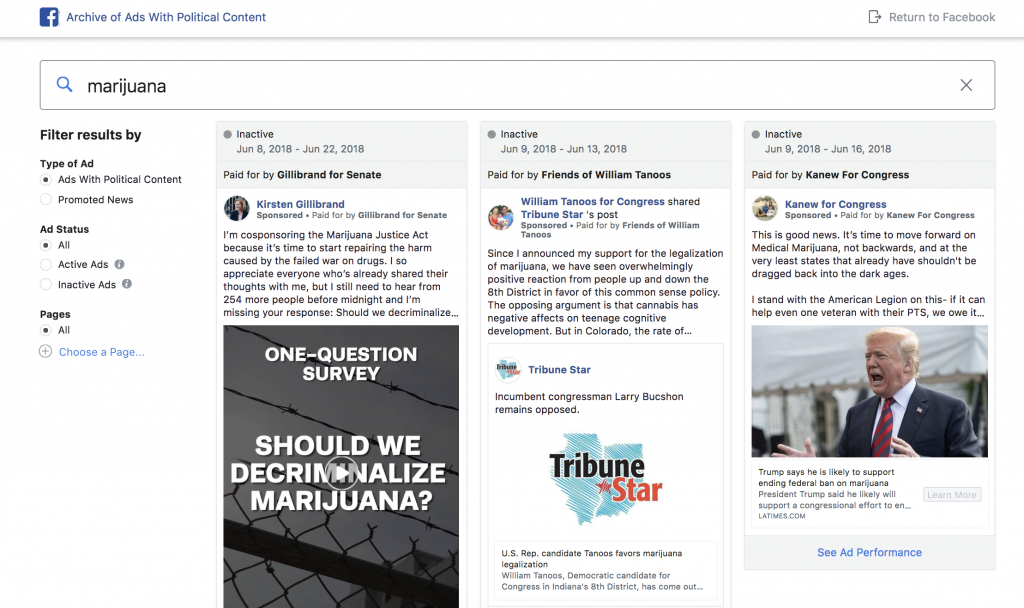 All told, more than 2,000 promoted posts referencing “marijuana” or “cannabis” have been shared since Facebook launched its ad archive database this spring.

The trend serves as another measure of the growing national support for marijuana reform—and the number of politicians who are campaigning on pledges to make it happen.

Committees to elect delegates, mayors, governors and state representatives also paid for Facebook ads that referenced “cannabis” or “marijuana.” For most candidates, their committees paid for two to three posts over the course of June, but some outliers posted dozens of marijuana-related political ads.

By far the most prolific poster of pro-legalization ads in June was Booker, widely believed to be considering a run for the 2020 Democratic presidential nomination. In one month, the Facebook page Cory Booker for Senate paid for 51 marijuana-related ads. The bulk of these posts concerned the senator’s Marijuana Justice Act of 2017, which would remove marijuana from the Controlled Substances Act and impose policies aimed at remediating the racial injustices of the drug war. 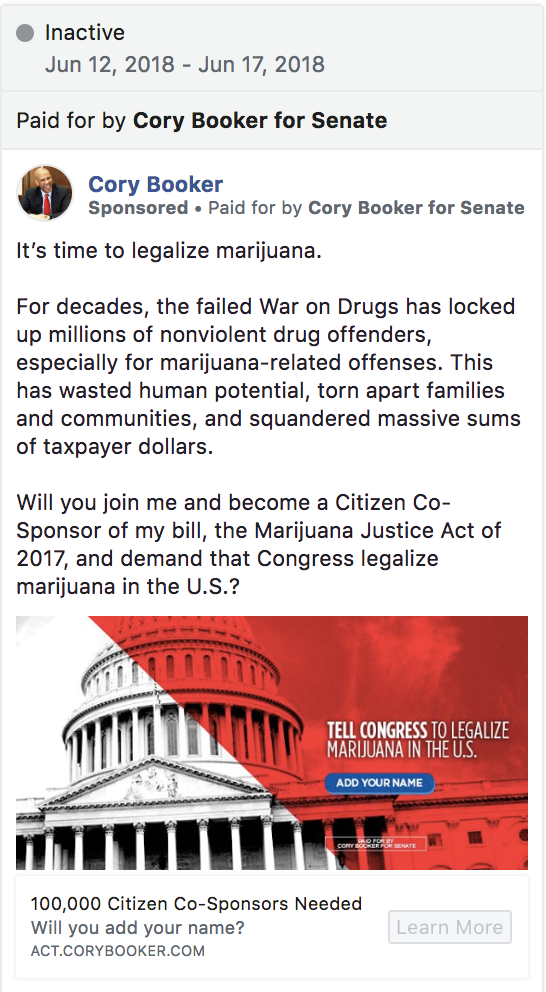 “It’s time to legalize marijuana,” one post reads. “For decades, the failed War on Drugs has locked up millions of nonviolent drug offenders, especially for marijuana-related offenses. This has wasted human potential, torn apart families and communities, and squandered massive sums of taxpayer dollars.”

But it was Gillibrand, another senator considered a likely contender for the 2020 Democratic presidential nomination, who dominated the marijuana political ad game over the past four months. The New York senator shared more than 100 paid-for political ads on Facebook referencing marijuana. 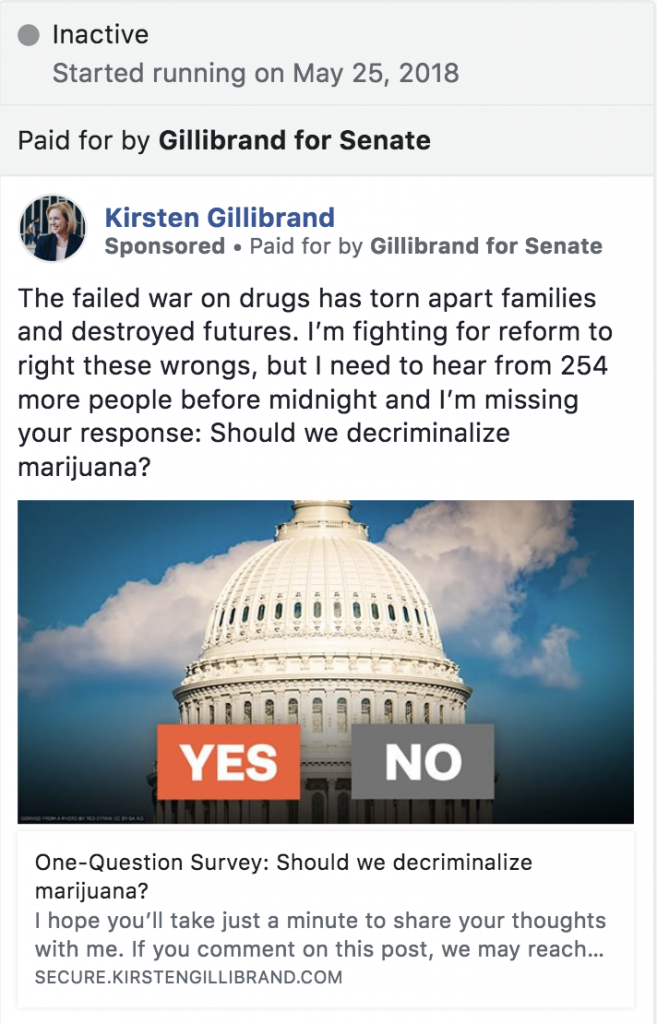 Many of those ads prompted followers to respond to questions such as, “Should we decriminalize marijuana?”

And almost 50 of Gillibrand’s posts were promoted on April 20, the unofficial cannabis celebration holiday… 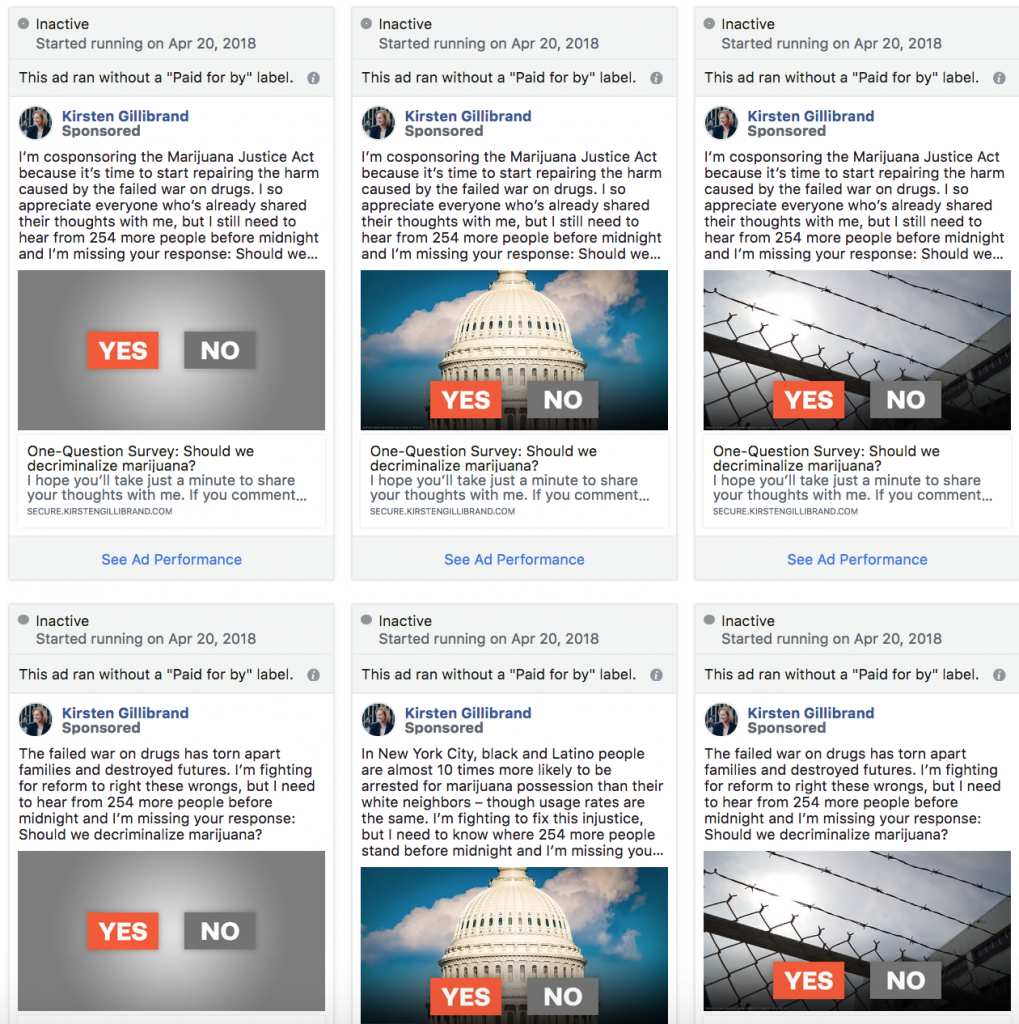 Only one of about 100 political pages included in this analysis promoted a candidate’s opposition to recreational marijuana legalization, in a mayoral race.

Overall, Facebook’s political ad search tool shows that more than 1,400 ads containing the word “marijuana” were launched since the site began archiving such posts, though not all of those were posted by political candidates; some are from advocacy organizations or news outlets. Another 560 or so contain the word “cannabis,” according to the database.

Why spend money to showcase a political figure’s pro-legalization views? Because it makes political sense.

Not only do a sizable majority of Americans support cannabis legalization, but surveys have also found that lawmakers who back reform efforts score easy political points among voters. One recent poll found that 44 percent of voters in “battleground” congressional districts would be more likely to vote for a candidate who supports legalization, for example.

While most marijuana-related ads were paid for by committees for Democratic candidates, they were by no means confined to traditionally “blue state” candidates. Office-seekers everywhere from Oklahoma to Georgia to Wyoming had paid political posts about their cannabis views.

Facebook has come under fire for its policy regarding marijuana-related posts, with some cannabis businesses in legal states complaining that they’re unable to pay for advertisements. The social media company does permit educational marijuana content, but page owners often have to go through a lengthy appeals process to get their ads about cannabis articles cleared for promotion after they are automatically initially blocked by an algorithm because of the keywords they contain.