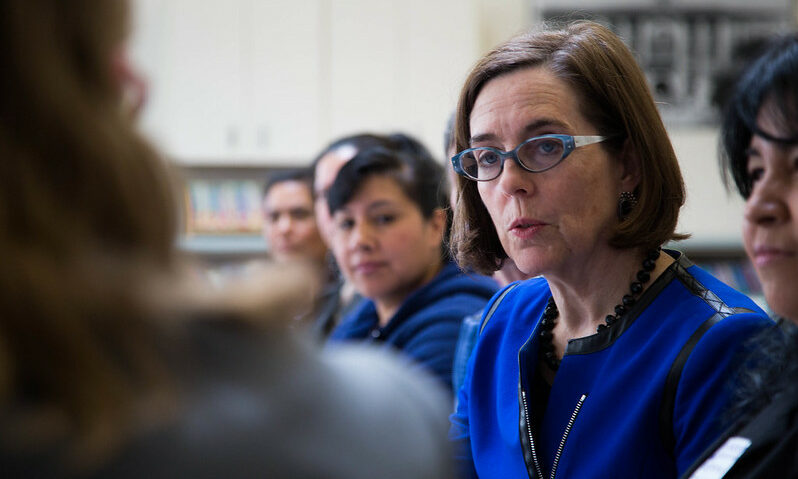 The governor spoke about her mass pardon of more than 45,000 people for state-level cannabis possession offenses at a forum hosted by the American Civil Liberties Union (ACLU) and the Princeton School of Public and International Affairs on Thursday.

“I absolutely believe that no one, no one deserves to be forever saddled with the impacts of a conviction for simple possession of marijuana when, in Oregon, it is a crime that is no longer on the books,” Brown told the audience, referring to state voters’ approval of a cannabis legalization initiative in 2014. “Certainly we know folks that have faced housing barriers, employment barriers, educational barriers for a conviction of this particular crime, and obviously, at least in my state, it is legal and has been for a number of years.”

“I think we all know the truth, and that is that people of color and our low-income community members have been disproportionately impacted by these crimes,” she said. “And so, for me, this is very much a racial justice issue.”

“We are truly a nation of second chances, and I have to applaud President Biden for taking the courageous leadership that he did to pardon over 6,000 folks,” Brown said. “He understands, as I think everyone in this room understands, that our criminal justice system is flawed and inequitable, and it’s certainly outdated.”

Describing the broader use of executive clemency power as “truly an act of mercy,” the governor pointed out that it’s not only useful for correcting injustices but is “an underutilized tool to enhance rehabilitation.”

“I’ve released a number of folks who are incarcerated for drug offenses who were using, and I released them early so that they could get into treatment, so they could get the medical support and services that they desperately needed and were denied when they were behind bars,” Brown said.

Thompson had his decades-long cannabis sentence commuted in 2020 by Michigan Governor Gretchen Whitmer (D) and was released from prison. He faced a 42-to-60-year sentence for selling three pounds of marijuana to an undercover police officer and for firearms charges in a case roundly criticized by advocates and the state’s attorney general.

“I want to get others free like I got free,” Thompson said. “When I heard I was going to get released, I didn’t believe it because they were playing so many politics. One minute they’re going to do something, next minute they didn’t.”

Feeling so grateful for getting to meet @MTClemency last week at our panel, after reading about him for so long. No one should have to endure what he had to, serving 25 years in prison for marijuana. But he never gave up, and today he is fighting to help people across the nation https://t.co/8bz6oNMStj

“You can’t just keep throwing away human beings. You got them underneath these trap sentences like you had me,” he said. “I wasn’t supposed to get out of prison until 2038. But because people, they showed humanity and had hearts and conscience. Some people don’t have no conscience, they’re just strictly political. They only think about their careers. But what about a human life? What about their families?”

“I just want you to know the pain that our families go through. Because I lost my family,” Thompson said. “Everybody don’t have to lose theirs. I don’t know my family anymore.”

The forum was part of the ACLU’s national Redemption Campaign focused on liberating 50,000 people from federal and state prisons via the use of existing clemency powers. According to their website, the campaign is pursuing clemency for people who would face shorter sentences if convicted now under recent reforms, people incarcerated for distribution and possession charges regardless of the substance, those incarcerated for technical probation or parole violations and older incarcerated people.

Biden cheered Brown’s mass cannabis pardon in November, tweeting that it’s “time to right our failed approach to marijuana,” while urging other states to follow suit.

Oregon is the latest state to pardon all prior offenses of simple marijuana possession, following my pardon of federal offenses and call to Governors to do the same in their states.

It's time to right our failed approach to marijuana. I urge states to follow Oregon's example. https://t.co/5m5aeaDStO

Kentucky Gov. Andy Beshear (D), meanwhile, signed two marijuana-related executive orders last month: one to protect patients who meet certain criteria and possess medical cannabis legally obtained from dispensaries in other states, and another to regulate the sale of delta-8 THC products. The medical cannabis move is based on the governor’s clemency powers.

But other governors, such as Florida’s Ron Desantis (R), have so far declined to act and are facing pressure from others in state government. Agriculture Commissioner Nikki Fried (D) wrote to Desantis last week to express her frustration over what she described as a “dereliction of duty” after the final Clemency Board meeting of the year was canceled.

In October, Fried had requested Desantis place cannabis clemency on the board’s agenda for its December meeting. She had hoped the meeting would be used to facilitate pardons for people with marijuana convictions on their records.

McConnell Blasts Democrats Over Plans To Add Marijuana Banking To Defense Bill, While Schumer Defends It As ‘Priority’

Brian Nam-Sonenstein is a journalist and editor living in southern Maine. He is a co-founder of the Beyond Prisons podcast and Shadowproof.com, and his work has appeared in The Portland Phoenix, Solitary Watch, TruthOut, Prison Legal News and other outlets.