With just days left before the end of the legislative session, efforts to legalize marijuana in New York have been revived, with a possible vote this coming week.

Though momentum to pass a legalization measure seemed to largely die off after lawmakers in neighboring New Jersey announced they wouldn’t move forward with plans to end cannabis prohibition through the legislature, advocates are increasingly optimistic that a deal in the Empire State is imminent.

Democratic members in both the Senate and Assembly held conferences last week to discuss details of the legislation. Spectrum News reported that the meetings went well, with members indicating that there’s support for the measure.

That’s just one of several positive signs that a proposal many observers thought was dead for the year has new life.

On Saturday and Sunday, staff for legislative leaders from both chambers and Gov. Andrew Cuomo (D) met to negotiate provisions of a revised legalization plan.

On Wednesday, an earlier Senate version of the bill was assigned “same as” status in the Assembly version. That means the current proposals in each chamber lined up with identical language and is considered to be an indicator that the legislation could pass.

Assembly Speaker Carl Heastie (D) said on Friday that his party has yet to determine whether they’ll bring the bill to the floor, but he added that “I think there is support in the conference.”

Assembly Speaker Carl Heastie told reporters his conference hasn't made a decision yet on whether to put a bill legalizing marijuana on the floor for a vote.

"We haven't made a final decision yet, but I think there is support in the conference," he said.

He also characterized the window of time until the end of the session on Wednesday as “an eternity.”

Assembly Speaker Carl Heastie says there is no final determination on a marijuana legalization bill, but notes there is “an eternity” between now and the end of session on Wednesday.

Cuomo, who said late last month that passing legalization remains a top 10 priority, has said that lawmakers who fail to approve items on his agenda, including ending cannabis prohibition, “should all be primaried, because that is a failure of a basic progressive agenda.”

On the flip side, the chairman of New York’s Democratic Party said earlier this month that if the Senate approves the legalization bill, they run to risk of alienating voters in certain areas such as Long Island and upstate New York. But that argument neglects to account for recent polling that shows voters in those regions strongly support legalization.

Notably, the measure’s most vocal opponents with the anti-legalization Smart Approaches to Marijuana have been sending email blasts in recent days urging their supports to call senators and voice opposition to the bill, giving the impression that the group is anticipating a vote. 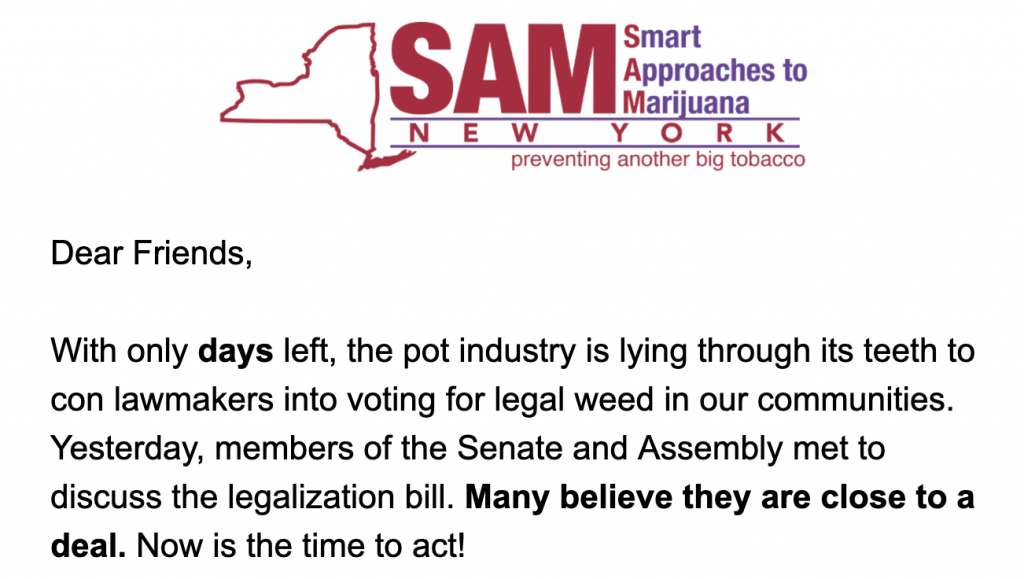 Assembly Majority Leader Crystal Peoples-Stokes (D), sponsor of the legalization legislation, seemed to confirm that suspicion on Friday, stating that after “conversations with my co-sponsor and colleague in the Senate, I am even more confident of a path for victory.”

.@CPeoplesStokes on status of marijuana legislation: "After conversations with my co-sponsor and colleague in the Senate, I am even more confident of a path for victory."

But despite that confidence, the fate of legalization in New York remains murky. An analysis earlier this month found that legalization was two votes short of a needed majority in the Senate.

Meanwhile, a number of key elected officials are calling on the governor and lawmakers to not only push legalization over the finish line but to include certain key provisions in the final legislation.

“Before we create a booming business for legal marijuana, we must provide relief to those individuals that have paid much more to society than what was due,” she wrote.

Legalizing marijuana is a racial & criminal justice imperative. If we truly want a more fair system, we must ensure that those who were unjustly harmed be given a clean slate.

That means providing full expungement for those convicted for non-violent marijuana offenses. https://t.co/jt8lEkrnz7

With only a few days left this session in Albany, we have a small window to legalize marijuana the RIGHT way.

We can right the wrongs of the past. We can bring fairness to communities of color. We can empower local business and not big corporations.

We have to keep the focus and bring this home.

The Buffalo News reported on Sunday afternoon that there were still a number of outstanding issues left to be settled between lawmakers, including whether or not home cultivation of cannabis would be allowed, how tax revenue would be allocated and whether localities would have to proactively opt in to allowing marijuana businesses or if there would instead be an opt out provision for those wanting to ban cannabis commerce.

Marijuana Update: Talks continue in Albany at this hour, with one insider describing it’s chances as “50/50.”
At issue is where the revenue from legalization would go.
Source says @NYGovCuomo and legislature disagree on who is most in need.
Others say Cuomo wants his bill only.

The session ends on Wednesday, and so far no vote has been scheduled in either chamber.

Meanwhile, lawmakers early on Monday morning filed what appears to be backup legislation to expand the decriminalization of marijuana and to provide a process to expunge or vacate prior cannabis convictions. And others support putting legalization on the ballot through a referendum that voters can decide on.

The situation is very fluid, and over the next few days advocates will be stepping up the push for action in Albany. On Sunday, they held a rally outside Cuomo’s Manhattan office.

How many NY dads have been criminalized & separated from kids bc of broken pot laws?

This post has been updated to include the latest developments as well as comment from a number of elected officials.