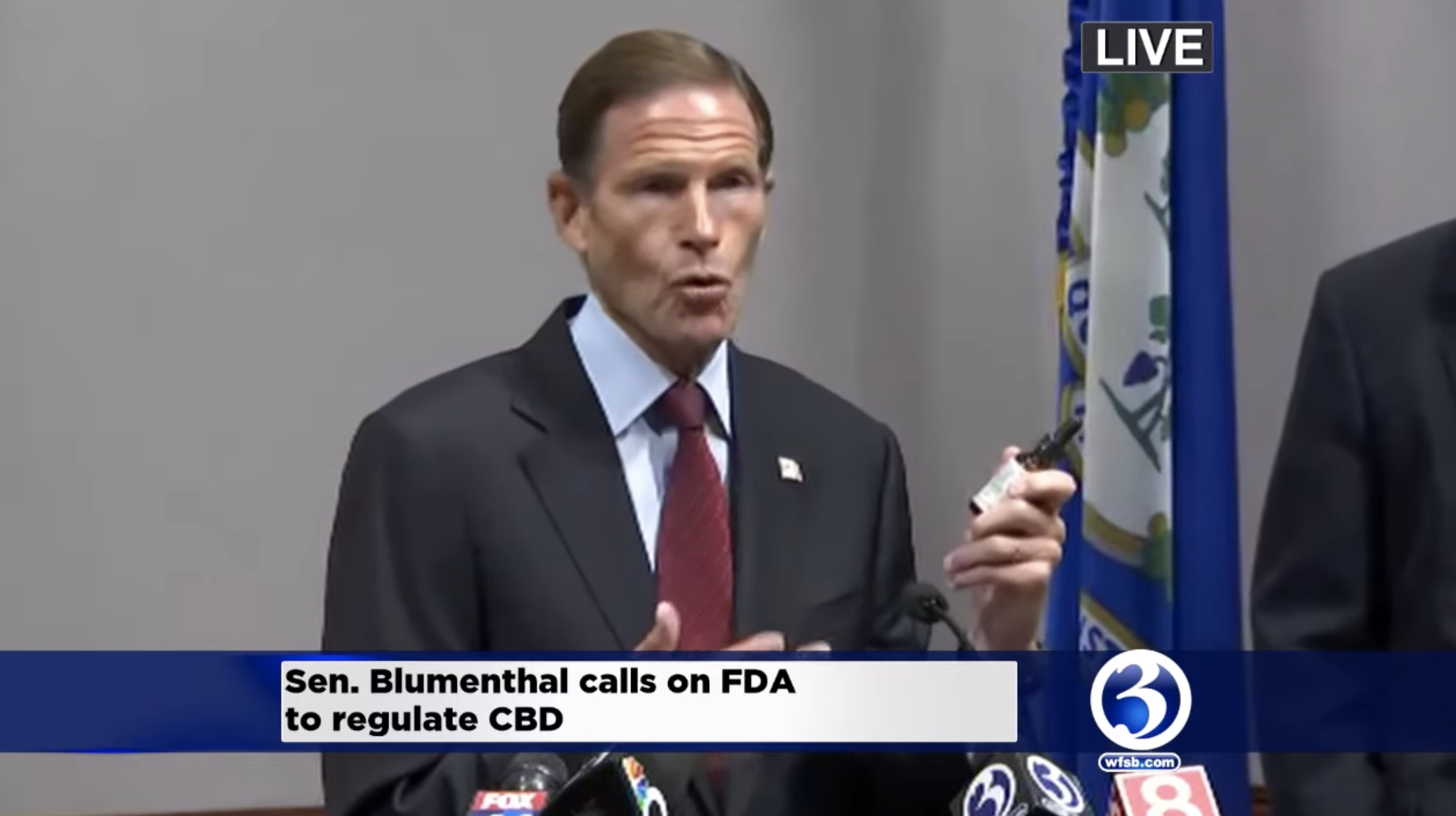 Another group of senators is calling on the Food and Drug Administration (FDA) to expediently implement regulations for CBD in order to protect consumers and free up the industry.

At a press conference on Tuesday, Sen. Richard Blumenthal (D-CT) said he is urging FDA to issue guidance so that CBD products can be lawfully marketed. He and five of his colleagues also sent a letter to FDA expressing their desire to speed up the rulemaking process.

While delivering his remarks, the senator showcased CBD-infused seltzer water, gummies and tinctures as examples of products that can be beneficial to consumers.

Because there’s a lack of regulations for hemp-derived CBD, which was federally legalized under the 2018 Farm Bill, the market is filled with a mix of good and bad actors, the senator said. Ensuring that companies have quality control standards and preventing them from making unsanctioned claims about the therapeutic benefits of their products must therefore be a priority.

“What we need to do is stop the bad actors, rid the market of unsubstantiated and inaccurate health claims, make sure the good guys have a leveled playing field where truth and accuracy are valued and rewarded by consumers and by the regulatory framework,” he said.

“Hemp growers, manufacturers, food producers and most important, consumers, all deserve a regulatory framework that will set rules for classification, labeling, marketing, quality and other important features so that we stop the Wild West claims and make available products that are truly helpful and beneficial to consumers,” he added. “The treatment of pain, anxiety, inflammation, other kinds of maladies may be aided by CBD and consumers deserve the benefits of those treatments but they also deserve to know the truth about the oils, lotions, gummies and other products that are out there.”

It’s an issue that has bipartisan support, Blumenthal said, stating that Senate Majority Leader Mitch McConnell (R-KY) has been a champion of the hemp industry.

“It is now imperative that the FDA finalize and implement a comprehensive regulatory framework for CBD, including guidance on the classification, labeling, quality, marketing, and sale of CBD-containing products, to ensure each manufacturer is producing safe and effective products for consumers,” they wrote.

The senators want and update within 90 days, calling the agency’s actions so far “woefully inadequate.”

“Consumers rely on the FDA to conduct timely and appropriate oversight of new and emerging ingredients, and guidance from the FDA would also help manufacturers to develop safer, more effective, and more credible products for consumer use,” they wrote. “The market for CBD products is rapidly outpacing the FDA’s current regulatory efforts, and your agency clearly must expedite its efforts to promote accuracy and transparency within the CBD industry. It is imperative that any comprehensive regulatory framework for products containing CBD provide straightforward guidance to manufacturers and retailers who wish to incorporate CBD into new products.”

Prior to the press conference, the senator discussed his efforts to encourage FDA to regulate CBD during a radio interview with WTIC.

“Everybody’s interest is in the FDA doing its job and it has been lagging and laggard, and that’s why I’m demanding that in fact it do its job,” he said. “The FDA is chronically slow.”

FDA has acknowledged that Congress intended for it to regulate CBD under agriculture legislation that the president signed in December, but officials have also stressed that because the compound exists as an FDA-approved drug, developing rules for it are complicated. Former FDA Commissioner Scott Gottlieb said earlier this year that the agency would have to create an alternative regulatory framework in order for CBD to be marketed as a food item or dietary supplement, adding that doing so could take years without congressional action.

Numerous lawmakers have said that timeline is unacceptable. A bipartisan coalition of 26 members of the House sent a letter to FDA last month, asking that the agency issue enforcement discretion guidelines while it prepares final rules for CBD. As long as companies are continuing to sell CBD products without regulations in place, they want FDA to outline its enforcement priorities to stipulate it will only take action against companies making inappropriate claims about the compound.

McConnell worked to insert language into a congressional spending report last month that also called on FDA to provide for the lawful marketing of CBD products.

“The FDA’s failure to finalize and implement a regulatory framework for CBD, including labeling, quality, marketing, and sale of CBD-containing products, is putting consumers at risk and inhibiting the industry,” Blumenthal said in a press release.

Read the senators’ CBD letter to FDA below:

National Academies To Host Forum On CBD Science This Month

This story was updated to included the letter senators sent FDA.