The number of banking institutions that are actively servicing accounts for marijuana businesses has grown by nearly 20 percent since the beginning of the year, according to newly released federal data.

As of the end of September, there were 375 banks and 111 credit unions maintaining financial services for cannabis businesses, according to a report published this month by the U.S. Treasury Department’s Financial Crimes Enforcement Network (FinCEN).

It is the latest in a series of quarterly updates the agency has issued, which together have shown steady growth in the number of financial services providers that are willing to work with the cannabis industry despite its continued federal illegality. 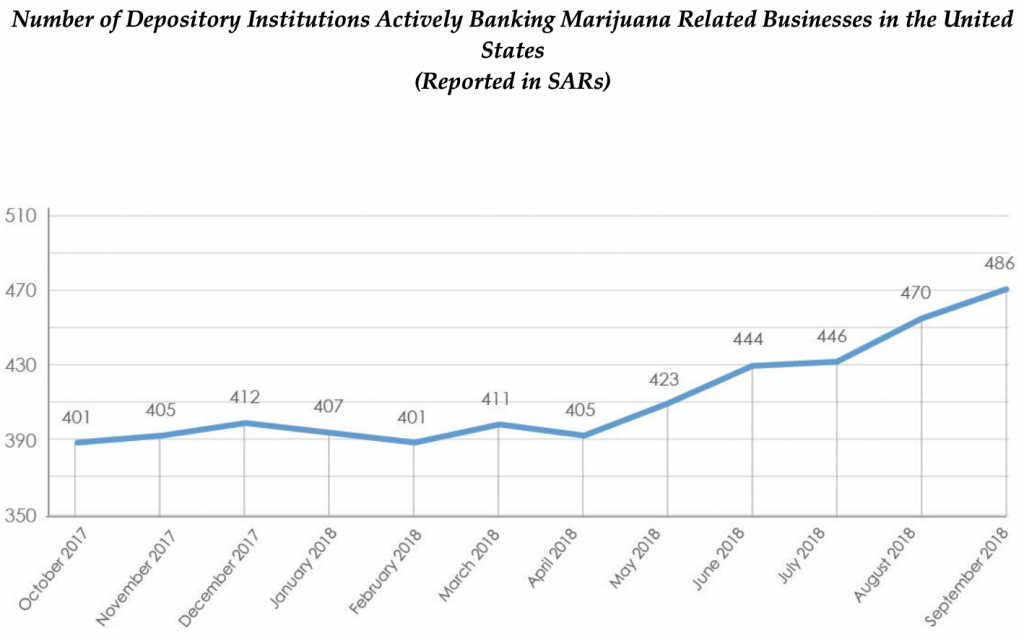 The new data comes as marijuana reform continues its political ascendancy. During this month’s midterm elections, Michigan voters approved marijuana legalization and those in Missouri and Utah passed medical cannabis measures. Several new pro-legalization governors are set to take office in January. And Democrats took control of the U.S. House of Representatives, where cannabis legislation is expected to be more seriously considered in 2019 than it has been over the past several years. One of the most-sought reforms by marijuana businesses is greater clarity on their ability to access banks.

In 2014, under the Obama administration, FinCEN issued guidance to banks about how to serve the marijuana industry without running afoul of federal regulators. The memo, which requires financial services providers to regularly file reports on customers with cannabis accounts, was meant to provide assurances to banks. But many have remained reluctant to work with marijuana businesses because ongoing federal cannabis prohibition could trigger money laundering laws and other risks.

In October, the American Bankers Association began surveying its members about the issues they face in serving cannabis businesses.

“We believe the time has come for Congress and the regulatory agencies to provide greater legal clarity to banks operating in states where cannabis has been legalized for medical or adult use,” a spokesperson for the organization said at the time.

“The [marijuana banking] reporting structure laid out in the 2014 guidance remains in place,” the new FinCEN report, which was first spotted by Cannabis Wire, says. “FinCEN will continue to work closely with law enforcement and the financial sector to combat illicit finance, and we will notify the financial sector of any changes to FinCEN’s” cannabis reporting procedures.

Meanwhile, a number of key Trump administration officials have indicated they want to see a clarity on cannabis banking issues.

For example, Steven Mnuchin, the treasury secretary, has suggested in congressional testimony that he wants state-legal marijuana businesses to be able to store their profits in banks.

“I assure you that we don’t want bags of cash,” he told a House committee in February. “We do want to find a solution to make sure that businesses that have large access to cash have a way to get them into a depository institution for it to be safe.”

In a separate hearing he said that resolving marijuana banking issues is at the “top of the list” of his concerns.

“It would great if that could be clarified,” he said.

That same month, Federal Deposit Insurance Corporation Chairwoman Jelena McWilliams said that while she directed her staff to consider ways to address the issue, the agency’s hands are “somewhat tied” until federal law changes.

Comptroller of the Currency Joseph Otting said last month that he is “hopeful there’s enough momentum in that direction” toward solving marijuana businesses’ banking access issues and that forcing them to operate in cash is “generally not healthy.”

Pressure is also coming from the states. In August, a coalition of the top financial regulators in 13 states sent a letter demanding Congress take action to protect banks that work with marijuana businesses.

Despite the growing call for clarity on the issue, key committees in the House and Senate rejected amendments this summer that would have prevented federal banking regulators from punishing financial institutions for serving the marijuana industry.

Standalone legislation to provide permanent protections to banks that work with cannabis businesses have garnered increasing numbers of cosponsors in both chambers, though they haven’t been scheduled for hearings or votes.

It remains to be seen whether a Democratic House will move cannabis banking legislation in 2019, and whether the Republican-controlled Senate would go along.

Portions of this story were previously published on Forbes.