A new poll is casting doubt on whether a Missouri marijuana legalization ballot initiative will succeed this November, with a plurality of voters saying they oppose the proposed constitutional amendment. But the campaign behind the reform says the results should be interpreted with a large grain of salt.

While advocates say they remain confident that they will prevail, the survey from the Remington Research Group and Missouri Scout found that just 43 percent of likely voters favor the specific initiative.

Prior polling has found strong majority support for the general concept of adult-use legalization among Missourians. But for this survey, the pollsters provided specific details about the contents of the measure, including the proposed tax structure and expungements provisions. A 47 percent plurality said they were against the initiative, with 10 percent saying they weren’t sure.

The results found that a majority of Democrats are in favor of the reform measure, at 57 percent. But the support drops down to 49 percent for independents and just 30 percent for Republicans. 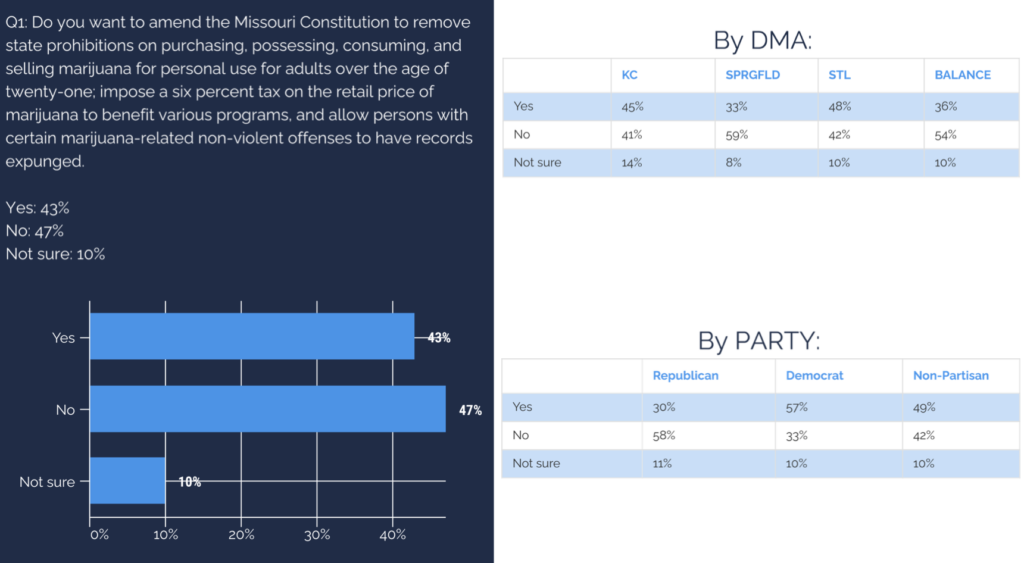 If the polling results are accurate, Legal Missouri 2022 would need to see a significant shift in voter sentiment to reach the simple majority threshold required for the measure to pass at the ballot.

But John Payne, the group’s campaign manager, told Marijuana Moment that people should be skeptical about these latest survey numbers, asserting that the “same pollster and political newsletter predicted medical cannabis might not pass in 2018, weeks before 66 percent of Missourians voted for it on the ballot.” (That poll did show majority support for the measure, but it was a much slimmer 53 percent compared to the actual overwhelming margin of passage.)

“Amendment 3 is strongly supported by Missourians and we are well on our way to a historic victory by being the first state to legalize marijuana and automatically expunge nonviolent cannabis offenses,” he said.

Won’t you check your voter registration and sign up for our newsletters at https://t.co/xqJ1fvCFAD?#legalmo22 #missouri #missourivoter 🗳

The new survey involved interviews with 1,117 likely voters in Missouri from September 7-8, with a +/- 2.8 percentage point margin of error.

An attempt to keep the initiative off the ballot faced a defeat in a county court last week, with a judge dismissing a lawsuit that contested the constitutionality of the ballot language as well as the state certification of signatures. The court tossed the suit on procedural grounds related to the plaintiff’s standing, but it also said it would have rejected the case on merits.

Luke Niforatos, CEO of the Colorado-based Protect Our Kids PAC, told Marijuana Moment that they would be appealing the decision, but the timeline and potential implications for the ballot are currently unclear.

Separately, the governor of Missouri recently ruled out the idea of expanding a special legislative session he convened to add marijuana legalization to the agenda, despite a push by some pro-reform activists and lawmakers who have criticized the ballot initiative.

State health officials are already taking steps to prepare for voter approval of the legalization measure.