Less than two years after Missouri voters approved a ballot measure to legalize medical marijuana, dispensaries made the state’s first cannabis sales to patients on Saturday.

I was honored to watch Larry, a cancer survivor, and his wife Sue, an RN, make the state’s first legal medical cannabis purchase this morning in St Louis. @mocanntrade @NewApproachMO pic.twitter.com/rCudrkdbfI

“Missouri patients have always been our north star as we work to implement the state’s medical marijuana program,” Dr. Randall Williams, director of the Missouri Department of Health and Senior Services, said in a press release. “We greatly appreciate how hard everyone has worked so that patients can begin accessing a safe and well-regulated program.”

Made history today by serving the first medical marijuana patients in Missouri. So proud of the team and all of the hard work of the entire industry to help get patients the medicine they need and deserve! More pics and video to come…

Officials have touted the speed with which they have gotten the voter-approved cannabis program off the ground, saying it is “one of the fastest implementations of a medical marijuana program in the United States.” 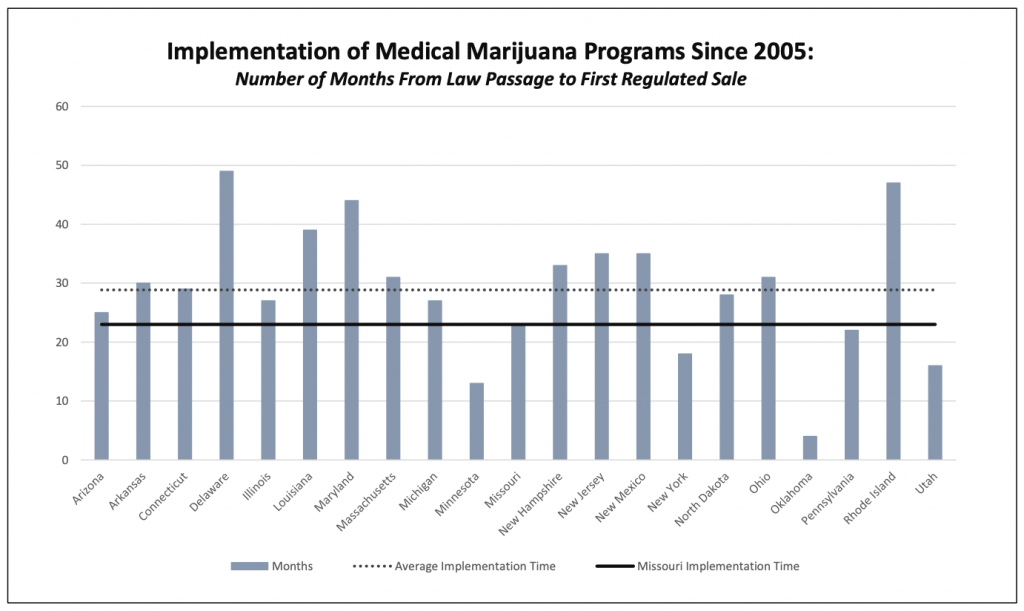 Via Missouri Department of Health and Senior Services.

“A tremendous amount of work has occurred by the licensed facilities and our team to get us to this point, and we continue to hear from more facilities that they are ready or almost ready for their commencement inspection,” Lyndall Fraker, director of the Section for Medical Marijuana Regulation, said in a press release. “We look forward to seeing these facilities open their doors to serve patients and caregivers.”

The impending launch of sales on Saturday was first announced by the Missouri Medical Cannabis Trade Association on Friday and reported by The Springfield News-Leader.

The wait is finally over! Tomorrow morning at 9am @NBlissCannabis will open the doors to their Ellisville and Manchester locations for the first medical marijuana sales in Missouri! Congrats to the whole N'Bliss team! The #MOMMJ industry is up and running! pic.twitter.com/wyZIcoyLBv

The state, which has so far licensed 192 dispensaries and expects most of them to open their doors by the end of the year, posted an interactive map that tracks the status of approved medical marijuana businesses.

For months, regulators have been caught up in lawsuits and appeals challenging their licensing decisions, with revenues that would otherwise go to supporting veteran services instead being allocated to covering legal costs.

Meanwhile, recreational sales of marijuana rolled out in Maine last week—four years after voters there approved a legalization ballot measure.