Maryland’s marijuana legalization referendum enjoys strong majority support, another poll has found. And importantly, a large swath of unlikely voters said they were more motivated to vote after learning that cannabis reform was on the ballot.

The Yes on 4 campaign released the results of the internal poll, which was conducted by Sojourn Strategies and Victoria Research, on Thursday. At a top level, it found that 69 percent of eligible voters in the state back the referendum question, which would trigger complementary legislation to implement marijuana regulations if approved.

In a separate question, 59 percent of respondents said they have a “strong” interest in enacting cannabis legalization.

But the campaign is especially touting results demonstrating that learning about the inclusion of cannabis reform on the ballot can drive turnout from voters who might not otherwise show up on Election Day.

Among respondents who described themselves as unlikely, 50-50 percent likely or probable voters, 61 percent said that they were more likely to vote knowing that legalization was on the ballot. Together, those groups make up 13 percent of the people polled. 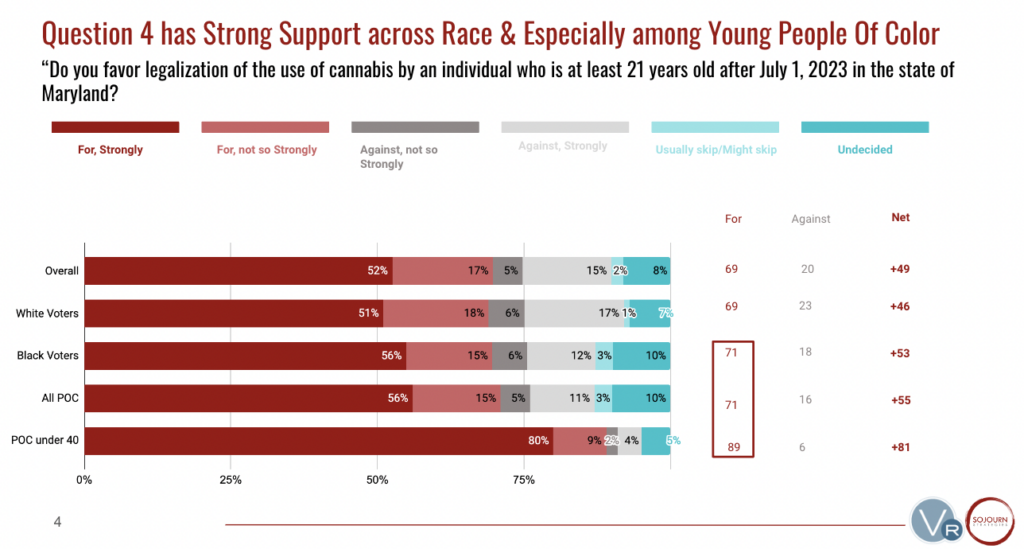 Put another way, nearly 10 percent of the potential electorate said they are more likely to vote because of the cannabis measure on the ballot.

“We are working hard on digital mobilization and advertising that reaches voters who might otherwise stay home in November,” Yes on 4 Campaign Chairman Eugene Monroe, a former NFL player, said in a press release. “Each day, we are having more conversations with Maryland voters who know marijuana legalization will bring jobs and justice to historically underserved communities.” 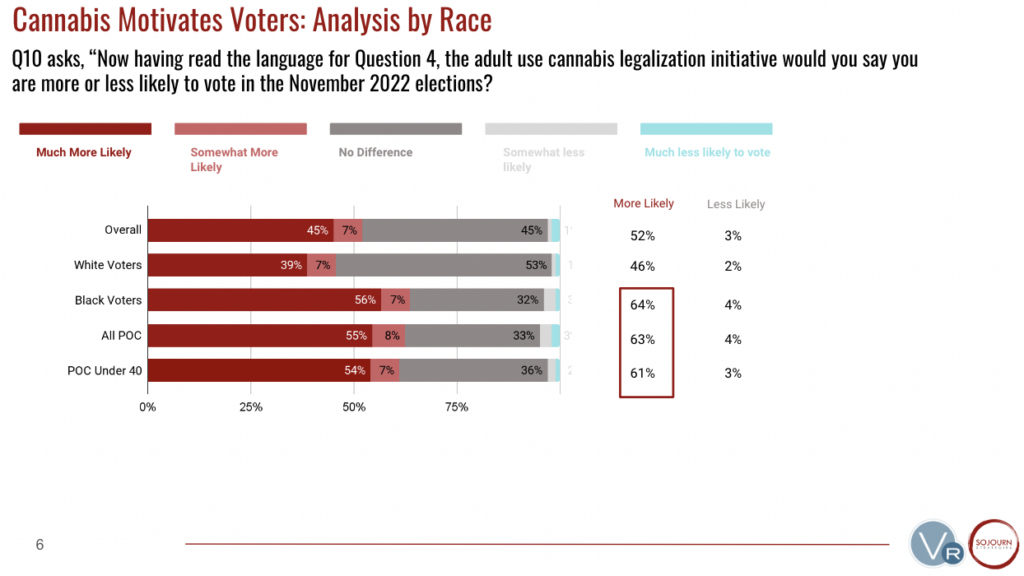 People under 40 and Black Marylanders were among the most likely to say that they’d be more inclined to vote with legalization on the ballot, at 64 and 48 percent, respectively. 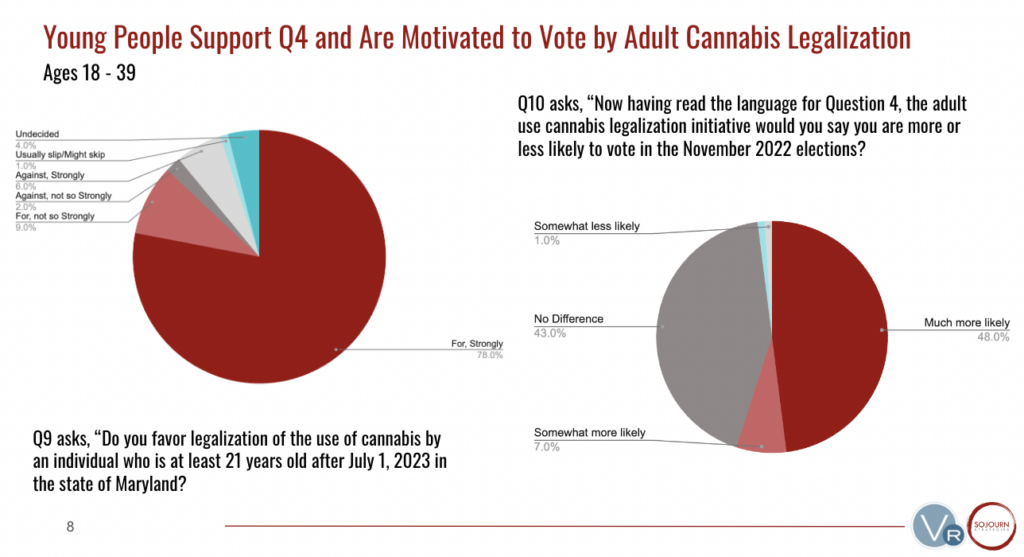 The survey involved interviews with 762 eligible voters from September 11-19, with a +/-3.9 percentage point margin of error.

Another poll released earlier this month similarly found that about three in four Maryland voters support legalizing marijuana, including a majority of Republicans.

Support is notably higher in these latest polls compared to other recent surveys, including one released last month that found 59 percent of Maryland voters want to legalize cannabis

For his part, Maryland House Majority Leader Eric Luedtke (D) said this month that he will be voting in favor of legalization at the ballot, but he added that the vote is “the beginning of the conversation.”

Here’s the exact language of Question 4 that’s going before voters:

“Do you favor the legalization of the use of cannabis by an individual who is at least 21 years of age on or after July 1st, 2023, in the state of Maryland?”

If voters pass the legalization referendum, it would mean that another bill would be implemented that provides regulations for an adult-use market. Gov. Larry Hogan (R) allowed that to take effect without his signature.

Under the complementary law, the purchase and possession of up to 1.5 ounces of cannabis would be legal for adults. The legislation also would remove criminal penalties for possession of up to 2.5 ounces. Adults 21 and older would be allowed to grow up to two plants for personal use and gift cannabis without remuneration.

Past convictions for conduct made legal under the proposed law would be automatically expunged, and people currently serving time for such offenses would be eligible for resentencing. The legislation makes it so people with convictions for possession with intent to distribute could petition the courts for expungement three years after serving out their time.

The legalization bill was amended throughout the legislative process. For example, language was attached to create a community reinvestment fund and allow state tax deductions for certain cannabis-related expenses that marijuana businesses are barred from claiming under current federal tax code.

If voters pass the referendum question, the reform wouldn’t take effect immediately. Possession of small amounts of cannabis would become a civil offense on January 1, 2023, punishable by a $100 fine for up to 1.5 ounces, or $250 for more than 1.5 ounces and up to 2.5 ounces. Legalization for up to 1.5 ounces wouldn’t kick in for another six months.

Advocates have taken issue with that protracted timeline. Having possession legalization take effect sooner was among several asks they made that were not incorporated into the legislation. For example, activists also wanted lawmakers to include a provision preventing police from using the odor of marijuana alone as the basis for a search.

Del. Luke Clippinger (D), who sponsored both the ballot question and implementation legislation, also served as the chair of the Maryland House Cannabis Referendum and Legalization Workgroup, which met regularly to take initial steps to prepare to pass marijuana legislation.

The panel, formed by House Speaker Adrienne Jones (D), discussed licensing and regulatory issues at its meetings, with members hearing expert testimony on the current marijuana policy landscape to help inform their approach in the future.

Clippinger said at one meeting that it was important for members to “prioritize equity in our efforts and ensure that we were recognizing and addressing the impact the war on cannabis has inflicted, particularly on brown and Black communities.”

Adult-use legalization began to advance through Maryland’s legislature in the 2021 session, but no votes were ultimately held. The Senate Finance Committee held a hearing last year on a legalization bill, which followed a House Judiciary Committee hearing on a separate cannabis proposal.

Maryland legalized medical cannabis through an act of the legislature in 2012. Two years later, a decriminalization law took effect that replaced criminal penalties for possession of less than 10 grams of marijuana with a civil fine of $100 to $500.

Meanwhile, the governor separately allowed a bill to create a state fund to provide “cost-free” access to psychedelics like psilocybin, MDMA and ketamine for military veterans suffering from post-traumatic stress disorder (PTSD) and traumatic brain injury to take effect without his signature this year.