Want a more satisfying time in the bedroom? A quick toke or two may do the trick, according to a new study in the journal Sexual Medicine.

While scientific evidence about the effects of marijuana use on sexual functioning is limited, there’s plenty of anecdotal claims online about cannabis improving libido, arousal and orgasm. So researchers decided to investigate, publishing one of the largest studies on the issue to date.

For their analysis, the authors used the anonymous survey responses of 373 participants (the majority of whom were straight, white women) who all sought care at a specific OB/GYN practice between March 2016 and February 2017. The survey included questions about overall sexual activity—including how satisfied they were with their current sex life, drive, orgasms and lubrication. The survey also asked whether or not they used marijuana, if they used prior to having sex and how frequently they partook.

Of the sample, 176 women said they use cannabis. “Among those who reported using marijuana before sex, 68.5 percent stated that the overall sexual experience was more pleasurable, 60.6 percent noted an increase in sex drive, and 52.8 percent reported an increase in satisfying orgasms,” the study’s authors wrote.

“The majority reported no change in lubrication,” however.

After they adjusted for race, the authors found that women who said they used marijuana before their bedroom activities had 2.13 higher odds of reporting satisfactory orgasms during sexual activity than those who reported no marijuana use before sex. 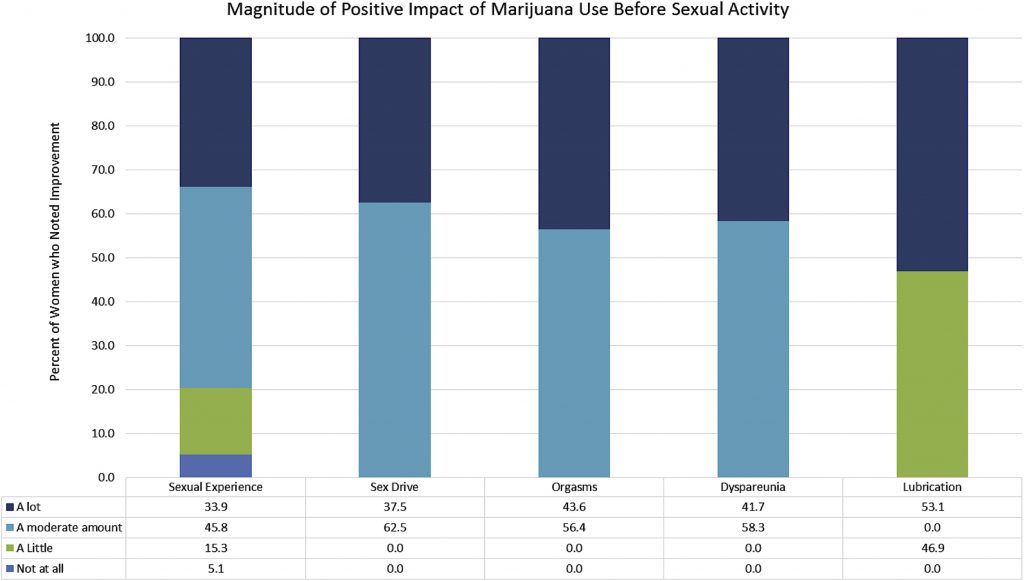 Becky Lynn, an associate professor of obstetrics and gynecology at Saint Louis University in Missouri, is the lead author of the study. In a recent interview, she said that she became interested in better understanding the impact of cannabis on sexual functioning when she found a number of her patients reporting use to help with their sexual problems.

“I have seen it used in women with chronic pain disorders that lead to painful sex, women who experience difficulty with orgasm or an inability to orgasm, and women who use it to improve their libido, which may not match their partner’s libido,” she told Weedmaps.

It’s still unclear, however, exactly why marijuana use appears to improve sex for women. Some experts believe it may be because cannabis helps to lower stress and anxiety, thus increasing a person’s confidence and willingness to experiment in the bedroom. It may also have something to do with the way marijuana interacts with the body’s cannabinoid receptors, some of which are located in parts of the brain responsible for regulating hormones that play a role in sex.

The current study adds to a growing body of research that shows marijuana positively affects women’s sexual experiences in a number of ways, and could potentially lead to life-changing treatments for female sexual dysfunction. And considering that women are less likely to support marijuana legalization than men, according to many polls, studies like this one are imperative to showing just how beneficial cannabis might be for them.

Why Women Support Legal Marijuana Less Than Men, According To A New Study