A majority of North Carolina adults support legalizing marijuana for adult use—and three in four say it should be legal for medical purposes—according to a new poll.

The survey found that the percentage of respondents who favor recreational cannabis legalization increased by nine points, from 45 to 54 percent, since the firm last polled North Carolina residents on the question in 2017.

Support for medical marijuana reform dipped to 73 percent, down from 80 percent in the earlier poll, but opposition remained stable at 18 percent, compared to 17 percent.

When it comes to recreational legalization, opposition “fell substantially over the last three years,” Jason Husser, director of the Elon Poll, said in a press release.

“I suspect this is due in large part to the wave of states that have passed legalization measures,” he said. “Medical marijuana legalization remains broadly supported in every demographic group we examined.” 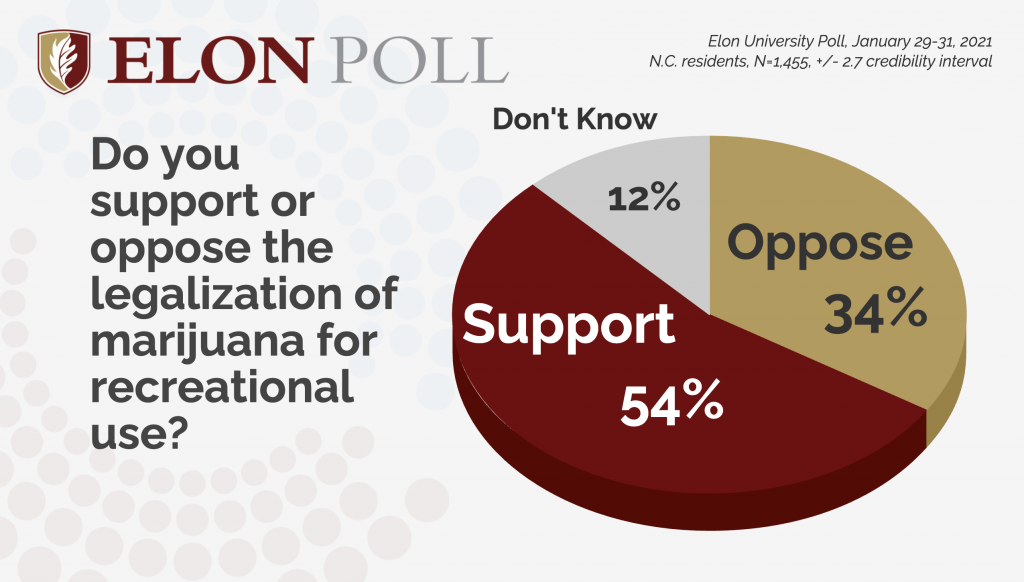 Democrats are more likely to embrace legalization at 59 percent, compared to 43 percent of Republicans.

State Sen. Wiley Nickel (D) shared the survey on Twitter and said that he’s in favor of legalizing medical cannabis, which he described as a “social justice,” “revenue” and “medical” issue.

The time has come for North Carolina to join the majority of states who have legalized medical marijuana. #ncpol https://t.co/Am7TR997fh

The senator also said he favors broader cannabis legalization but that “the first step is decriminalization then medicinal use.”

I’m there too. The first step is decriminalization then medicinal use.

We’ll need to get medical marijuana done the right way before we can have the debate about full legalization in North Carolina.

Meanwhile, U.S. Sen. Thom Tillis (R-NC) wrote to a constituent on Wednesday that he does “not support the broad legalization of marijuana for recreational use,” according to NORML.

Today, @SenThomTillis told a North Carolina voter: "I do not support the broad legalization of marijuana for recreational use"

Respondents were also asked a series of related questions such as whether criminal penalties should be reduced for cannabis possession. Sixty-seven percent said possession should be a civil, rather than criminal offense, while 20 percent said they were opposed to the policy change. 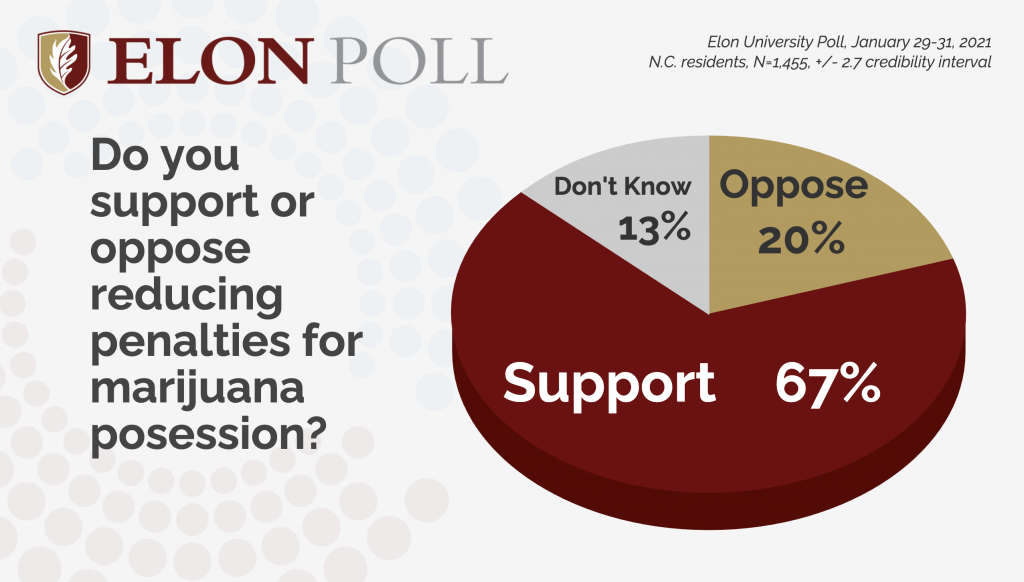 A task force convened by Gov. Roy Cooper (D) backed decriminalization as part of a series of policy recommendations on racial equity that were released late last year. The group also said prior cannabis convictions should be expunged and the state should start a study on whether to more broadly legalize marijuana in the state.

Under current state law, possession of up to half an ounce of marijuana is a class 3 misdemeanor, which comes with a fine of up to $200. There were 31,287 such charges and 8,520 convictions in 2019, the task force said, and 61 percent of those convicted were nonwhite.

Possessing more than half an ounce up to 1.5 ounces of cannabis is a class 1 misdemeanor, subject to up to 45 days imprisonment and a $200 fine. In 2019, there were 3,422 such charges and 1,909 convictions, with 70 percent of those convicted being nonwhite.

In terms of the impacts of legalization, 64 percent of North Carolina adults said regulating marijuana sales would boost the state’s economy, 45 percent said crime would decrease (compared to 24 percent who said it would increase) and there was uncertainty on the question of impaired driving, with nearly half of respondents saying they didn’t know what effect it would have.

Asked about the morality of cannabis consumption, 64 percent said they don’t think it’s morally wrong to use marijuana, while 22 percent said it is. The survey also found that most people (54 percent) don’t think cannabis is a gateway drug, compared to 27 percent who do subscribe to that notion.

The survey from Elon University involved interviews with 1,455 North Carolina adults from January 29-31.