Marijuana activists have long argued that legalization would free up police departments to focus on other crimes. But six years after Colorado and Washington State voted to end prohibition, what does the evidence show?

A new study published in the journal Police Quarterly indicates that advocates were right after all. Police clearance rates—a figure that represents the number of crimes that resulted in an arrest divided by the total number of reported crimes—increased in both states post-legalization.

Logically, the argument makes sense. Before a state makes it legal to possess marijuana, for example, there are officers who will take time to investigate and charge individuals for low-level cannabis offenses. But when a state legalizes, they no longer have to allocate law enforcement resources to marijuana-related crimes, thereby enabling officers to go after different, and sometimes more serious, cases.

But up until this study, there wasn’t much researching exploring the direct relationship between legalization and crime clearance rates. For the first time, researchers demonstrated that—in Colorado and Washington State, at least—police were able to make more arrests for various crimes post-legalization. That includes violent crimes, property crimes, burglaries and motor vehicle thefts.

“While our results cannot specifically explain why police clearance rates have increased in Colorado and Washington, we think the argument that legalization did in fact produce a measurable impact on clearance rates is plausible,” the researchers concluded. “Our models show no negative effects of legalization and, instead, indicate that crime clearance rates for at least some types of crime are increasing faster in states that legalized than in those that did not.”

Alright, so how did crime clearance rates change post-legalization?

There were some modest differences in clearance rates between Colorado and Washington State, but the overall trend revealed an increase in these two states compared to all other states, the study found. Here’s a breakdown of the clearance rate changes for four different crime types: 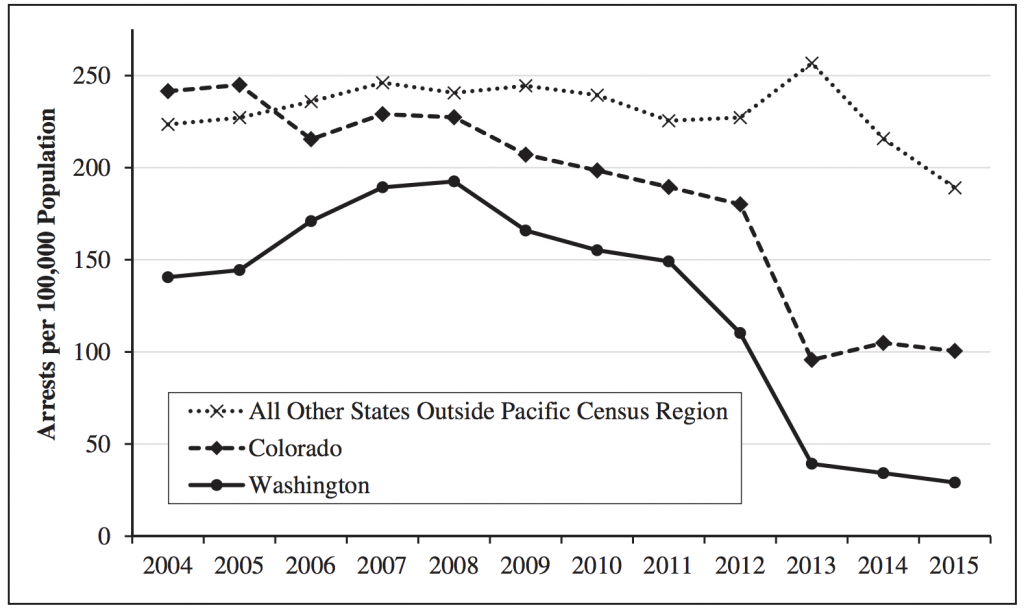 Likely the most obvious result of marijuana legalization at the state-level is that arrests for marijuana possession would decrease. Dramatic declines in cannabis possession rates were observed in Colorado and Washington State following the passage of legalization initiatives in 2012.

“Conversely, while there was a jump in the trend line for average violent clearance rate at the point of intervention at the national level, post-intervention clearance trends did not shift upward as occurred in the treatment states,” the study authors wrote. “This set of findings suggests that right around the time of legalization, clearance rates trends seemed to increase for violent crime in general for both Colorado and Washington, though no similar shifts are noted for the country as a whole.”

While many pro-legalization have contended that cannabis reform would result in more police officers focusing on more serious crimes, “it is likely that police already spent a significant amount of resources investigating more serious crimes,” the study authors wrote.

“[I]n the absence of other compelling explanations, the current evidence suggests that legalization produced some demonstrable and persistent benefit in clearance rates, benefits we believe are associated with the marijuana legalization proponents’ prediction that legalization would positively influence police performance,” the study’s conclusion reads.

People Really Do Have A Marijuana “Jay-Dar,” New Study Finds