The state Department of Public Health recently determined that it will proceed with an application asking the Drug Enforcement Administration (DEA) for a formal exemption under the Controlled Substances Act in an effort to prevent the loss of federal funding it receives for education and long-term care facilities. The state’s market could see additional, inadvertent benefits if the application is approved, however, advocates say.

“There’s no guarantee that [DEA] will do anything with that or respond to us, but…we will move forward with doing our best to minimize that conflict between state and federal law,” the chair of the state’s Medical Cannabidiol Board said at a meeting last week.

Members said they will be involved in the drafting of the application for the federal carve-out over the coming months. The board’s next meeting is scheduled for November 13. The public health department, which oversees the board, will submit the application to DEA once it’s finalized.

The language of a bill approved by state lawmakers that prompted this decision doesn’t specifically call on regulators to submit the application; rather it broadly calls on the public health department to “request guarantees from the agencies of the federal government providing funding to educational and long-term care facilities that facilities with policies allowing patients to possess medical cannabidiol on the grounds of the facilities…or allowing facility staff to administer medical cannabidiol to a patient shall not lose eligibility for any federal funding due to such policies.”

But members said at last week’s meeting that the DEA exemption application process would be the most effective way to establish protections from losing funds.

Listen to the relevant excerpts of the board meeting below, courtesy of Iowans for Medical Marijuana:

DEA regulations stipulate that the agency’s administrator “may grant an exemption in his discretion, but in no case shall he/she be required to grant an exception to any person which is otherwise required by law or the regulations.”

If DEA approved Iowa’s application, it could do more than provide the specific protections that lawmakers requested. According to Carl Olsen, a longtime cannabis reform advocate in the state, getting that exemption would also free up marijuana business access to financial institutions, resolve tax burdens that are unique to the industry and help promote research into cannabis.

owa’s medical cannabis program is more limited than those that have been established in other states. For example, it limits registered patients to a maximum of 4.5 grams of THC per 90-day period. Prior to a reform adopted by the legislature earlier this year, patients could only access cannabis products with up to three percent THC content.

“The Department has determined that it will move forward with seeking an exception for cannabis as a schedule I substance in Iowa from the DEA, in attempt to minimize conflict between State and Federal Law,” a presentation from the public health agency states. 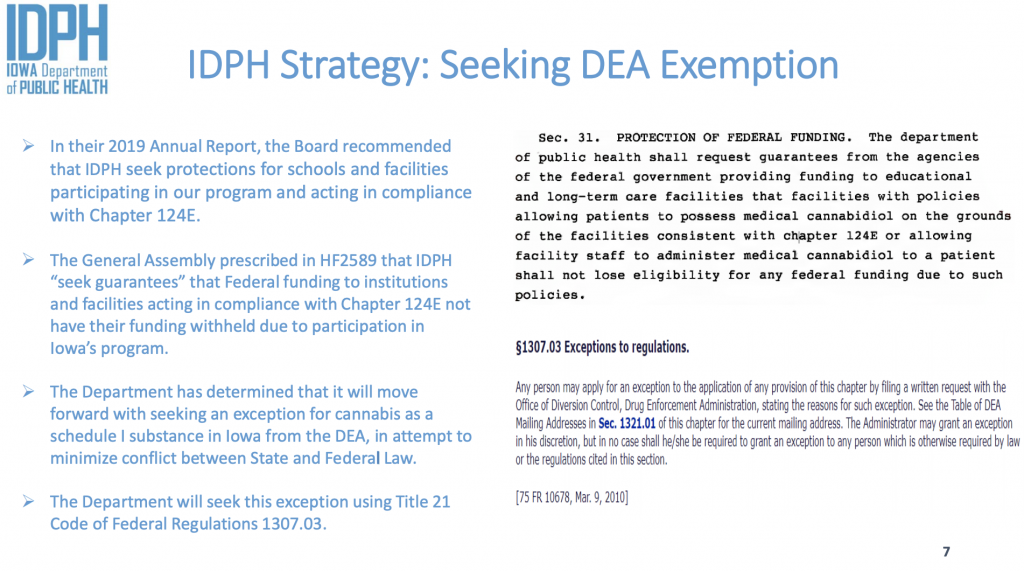 It remains to be seen whether DEA will act on the application after its filed. The agency has historically resisted rescheduling requests, let alone full exemptions, for marijuana. In fact, scientists and veterans sued DEA this year, arguing that the legal basis it has used to justify keeping cannabis in Schedule I is unconstitutional. They asked for a review of its decisions to reject rescheduling petitions across several decades.

A federal appeals court denied a request from DEA to dismiss the lawsuit last month.

That development came three months after a Justice Department whistleblower accused Attorney General William Barr of directing investigations into 10 cannabis firm mergers because of the top prosecutor’s alleged personal animus for the industry.

That said, a top department official said in a letter to Congress that those actions are better understood as helping to ensure consumers have affordable access to products in a competitive cannabis market—a curious position for the federal government to take.