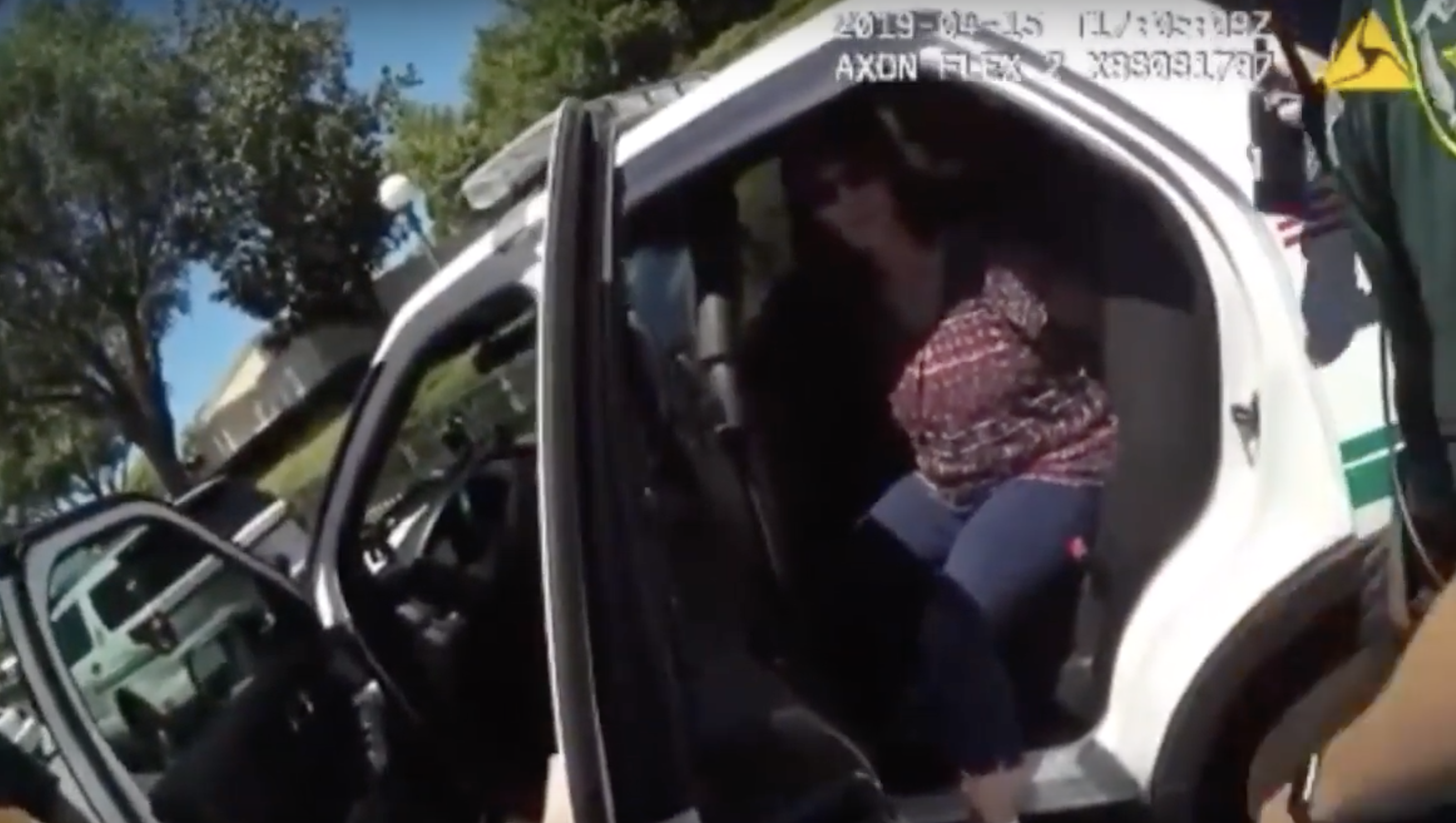 Police released body camera footage of a 69-year-old woman being arrested at a Florida amusement park for possessing CBD oil without a state medical cannabis card on Tuesday.

Hester Burkhalter, a grandmother who suffers from arthritis, was arrested after an off duty sheriff’s deputy discovered the oil in her purse at a checkpoint at Disney’s Magic Kingdom last month in a case that made headlines around the world.

The newly released video shows Burkhalter being handcuffed and placed in the back of a patrol car, where she began to feel claustrophobic and said, “I can’t breathe. I feel like I’m going to pass out.” One deputy said that she threw up, according to News 6.

Burkhalter, who says her doctor in Tennessee recommended CBD, later spent 12 hours in custody and was released on a $2,000 bond.

Burkhalter requested to be transported to the jail alone, as opposed to being transported along with another individual who was arrested for possession of a cannabis vaporizer, and a deputy made a call to accommodate her. She was allowed to be taken to the facility in the front seat of a separate patrol car.

“The older female said she gets claustrophobic, and feels like she’s going to pass out, and wants somebody else so she can go by herself,” the deputy said on a call.

Once she was in the front seat with air conditioning on, she said she felt better and thanked the deputy.

“I couldn’t breathe back there,” she reiterated.

When the arrest was first reported, reform advocates condemned the park and sheriff’s department for subjecting an older woman to an arrest on a family vacation for simple possession of a non-intoxicating compound that is known to treat pain and inflammation.

CBD is legal for medical purposes in Florida, but individuals must be registered to possess medical cannabis in the state. Hemp-derived CBD was federally legalized under the 2018 Farm Bill, though the Food and Drug Administration (FDA) has not yet developed regulatory guidelines allowing for its lawful marketing as a food item or supplement.

Prosecutors dropped the charges against Burkhalter earlier this month, finding her case unsuitable for prosecution. She’s since announced plans to file a lawsuit against Disney and the sheriff’s department.

“Horrific treatment that they placed upon this church-going, law-abiding grandmother,” her lawyer said at a press conference.

In a similarly confounding recent case, a 72-year-old woman was arrested at a Texas airport after security discovered CBD oil. She was charged with a felony that carried a maximum sentence of 20 years, and she stayed in custody for two days.

“To be honest, I did not even think about the possibility of my CBD being illegal or being challenged,” Lena Bartula, who was going to visit family in Oregon, said. “It is such an integral part of my wellness that it got thrown into my bag along with Vitamin C and oregano oil.”

“Had I thought about it, I would have remembered that I could buy it in Portland,” she said.

The charges in that case were also dropped about two months after the arrest.

In other recent cannabis enforcement action called out as excessive by reform advocates, Missouri police officers searched through the belongings of a man with stage-four pancreatic cancer in March after a security guarded reported the smell of marijuana.

The officers found nothing, but video of the search sparked public outrage over the harassing behavior of the officers toward a sick man who said he does benefit from medical cannabis.

An expert panel created by the National Football League (NFL) and its players union is downplaying the potential benefits of CBD for players, stating that while the cannabis compound shows promise in the treatment of some forms of pain, the science doesn’t currently live up to the “hype.”

Following a fact-finding forum on alternatives to opioid painkillers, which involved conversations with CBD manufacturers, the Pain Management Committee for the NFL and the NFL Payers Association (NFLPA) noted on Tuesday that there’s strong interest in CBD and medical marijuana more broadly. But the panel didn’t seem convinced that the non-intoxicating ingredient would benefit players.

“CBD is a promising compound, but the level of its use in the United States outpaces the level of research at this point,” the committee wrote in a white paper for players. “Most of the hype about CBD is based upon results from animal studies.”

“Clinical trials in large numbers of people are usually needed before millions of Americans use a medication for serious medical problems,” the group said. “There are two small clinical studies that suggest that CBD may be effective for treating a kind of pain called neuropathic pain that involves a burning feeling usually in a person’s feet.”

The paper also said that because CBD products are largely unregulated, it’s hard to determine whether they are properly labeled, and there’s the potential for such products to contain THC, which could result in a positive drug test for players.

Additionally, “there may be drug-drug interactions caused by CBD or players may opt for CBD as a medical treatment in lieu of treatments with more scientific evidence supporting them,” the NFL and NFLPA committee said in another white paper intended for league medical staff.

The body also raised doubts about clinical studies into Food and Drug Administration-approved medications composed of synthetic cannabinoids that are used in the treatment of chronic and neuropathic pain, arguing that those investigations relied on small sample sizes and limited follow-ups that call into question their therapeutic value.

“Of course, cannabis remains a banned substance under the NFL Policy for Substances of Abuse,” the committee concluded. “In addition, the potential problems associated with cannabis, from acute impairment of driving, addiction, and exacerbation of psychiatric disorders such as depression and anxiety, make it a substance to approach with extreme caution.”

A fact-finding forum the panel held on Tuesday wasn’t aimed at amending league policy directly, but rather it was meant to be “an educational and scientific exercise” that “does not impact the jointly administered Policy and Program on Substances of Abuse,” the groups said in a joint statement to NFL.com.

That said, negotiations are ongoing between the league and players union, and there’s pressure on NFL to adopt a more permissive policy when it comes to marijuana, especially as more states opt to legalize it for medical or recreational purposes.

After the MLB announced last year that it is removing cannabis from its list of banned substances for baseball players, Dallas Cowboys owner Jerry Jones and star quarterback Tom Brady of the New England Patriots both said they were expecting the league to follow suit and change its marijuana policy.

Sarah Silverman Calls Out Dave Chappelle For Not Sharing His Marijuana

In a clip from the Mark Twain Prize for American Humor gala that was posted on Sunday, Silverman talked about her long friendship with Chappelle and went on to share an anecdote about how he once visited her and smoked an entire joint himself without sharing.

“We were together in Vancouver and he came over to smoke a joint. And that’s exactly what he did,” she said. “He came over and he smoked a joint—the whole thing. Like by himself, while pontificating about everything that’s wrong with the world.”

This was at least the second time that Chappelle’s affinity for mind-altering substances came up during the prestigious awards ceremony that was taped in October and is being aired on PBS on Tuesday. Another fellow comedian, Aziz Ansari, came on stage and joked about a psychedelic experience he had with Chappelle the day before he was announced as the prize’s recipient.

In that bit, Ansari said Chappelle asked him if he wanted to take psilocybin mushrooms together. While Ansari initially said he wanted to take it easy and relax, Chappelle persuaded him that eating the psychedelic fungi would be a more memorable experience to mark the occasion.

Another person with a drug story about Chappelle is podcaster Joe Rogan, who recently talked about the comedian going to a private screening of Once Upon a Time In Hollywood and eating magic mushrooms that he got from a fan. Rogan didn’t partake, but he said Chappelle gifted him an unlabeled bag of cannabis edibles.

Both psilocybin and marijuana have regularly been featured in Chappelle’s comedy routines. In 1998, for example, he joked about a time he took mushrooms (also from a stranger) and started hallucinating during a haircut.

Beyond comedy, Chappelle has also advocated for marijuana reform on a serious basis. Former NAACP President Ben Jealous, who ran for governor of Maryland in 2018 on a pro-legalization platform, said Chappelle was the person who first put the idea of cannabis reform in his head.

In a clip from the Mark Twain Prize for American Humor gala that was posted online this week, Ansari shared an anecdote about the night before it was announced Chappelle was the award’s recipient.

While Ansari wanted to get some rest after the two comedians finished their sets at an Austin, Texas show, Chappelle proposed that they take psilocybin mushrooms instead.

“Dave said, ‘what kind of night are you trying to have tonight, Aziz?'”

“I said, ‘I’m probably going to take it easy, we went hard yesterday and we’ve got shows tomorrow.'”

“He said, ‘well you want to eat these psychedelic mushrooms I got? They’re supposed to be amazing.'”

Unconvinced, Ansari said he might “just take it easy and get some rest for tomorrow,” but his partner wasn’t deterred.

“He said, ‘well, Aziz, no one knows this, but tomorrow they’re going to announce that I am the winner of the Mark Twain Prize for American Humor.’

Ansari, who described the back-and-forth at the award ceremony, which was taped in October, acquiesced: “I said, ‘Dave you’ve got a point, let’s eat those mushrooms—to Twain.'”

It’s unclear if the psilocybin mushrooms the pair shared are the same ones that Chappelle apparently got from a stranger ahead of a private screening of Once Upon a Time In Hollywood—another recent psilocybin anecdote about the comedian that was shared by podcaster Joe Rogan.

While Rogan didn’t partake in the psychedelic fungus, he said Chappelle did gift him a bag of unlabeled marijuana edibles.

Chappelle has joked about his marijuana and magic mushrooms experience in several of his comedy routines—including a 1998 bit where he also talked about taking shrooms he got from a stranger and then hallucinating during a haircut.

But the comedian has also seriously advocated for cannabis policy reform. Former NAACP President Ben Jealous, who ran for governor of Maryland in 2018 on a pro-legalization platform, credited Chappelle for first putting the idea of marijuana reform in his head.

PBS is set to air a special on Chappelle’s Twain prize on Tuesday.