The U.S. Forest Service will spend nearly $50,000 to hire a hazardous materials consulting firm to train employees how to safely remove marijuana grown on public lands under a newly awarded government contract.

The agency says the training is needed to protect employees, some of whom reportedly have been taken to emergency rooms after being exposed to hazardous chemicals while clearing marijuana plants in years past.

“Before 2016 we had numerous number [sic] of our Agents and Officers getting sick in our marijuana cultivation sites on our public lands requiring trips to emergency rooms with possible long term health effects,” says a typo-ridden document filed in support of the contract that was posted last week to the U.S. General Services Administration website. “In 2016 we received our fist [sic] citation from OSHA for not providing our personnel the training and PPE needed to operate in this environment.”

Training of agents with the Forest Service’s Pacific Southwest Region will be conducted by NES, a leading hazardous materials consultant and training company that works extensively with law enforcement. In the document, the government says the NES program “is the ONLY training course in the U.S. available that meets our needs, and has met OSHA standards.” The course is estimated to cost taxpayers $44,732, and there will be no bidding process or consideration of competing firms under the single source award.

Going forward, employees will need to pass the hazmat class before they can participate in cannabis-clearing operations. 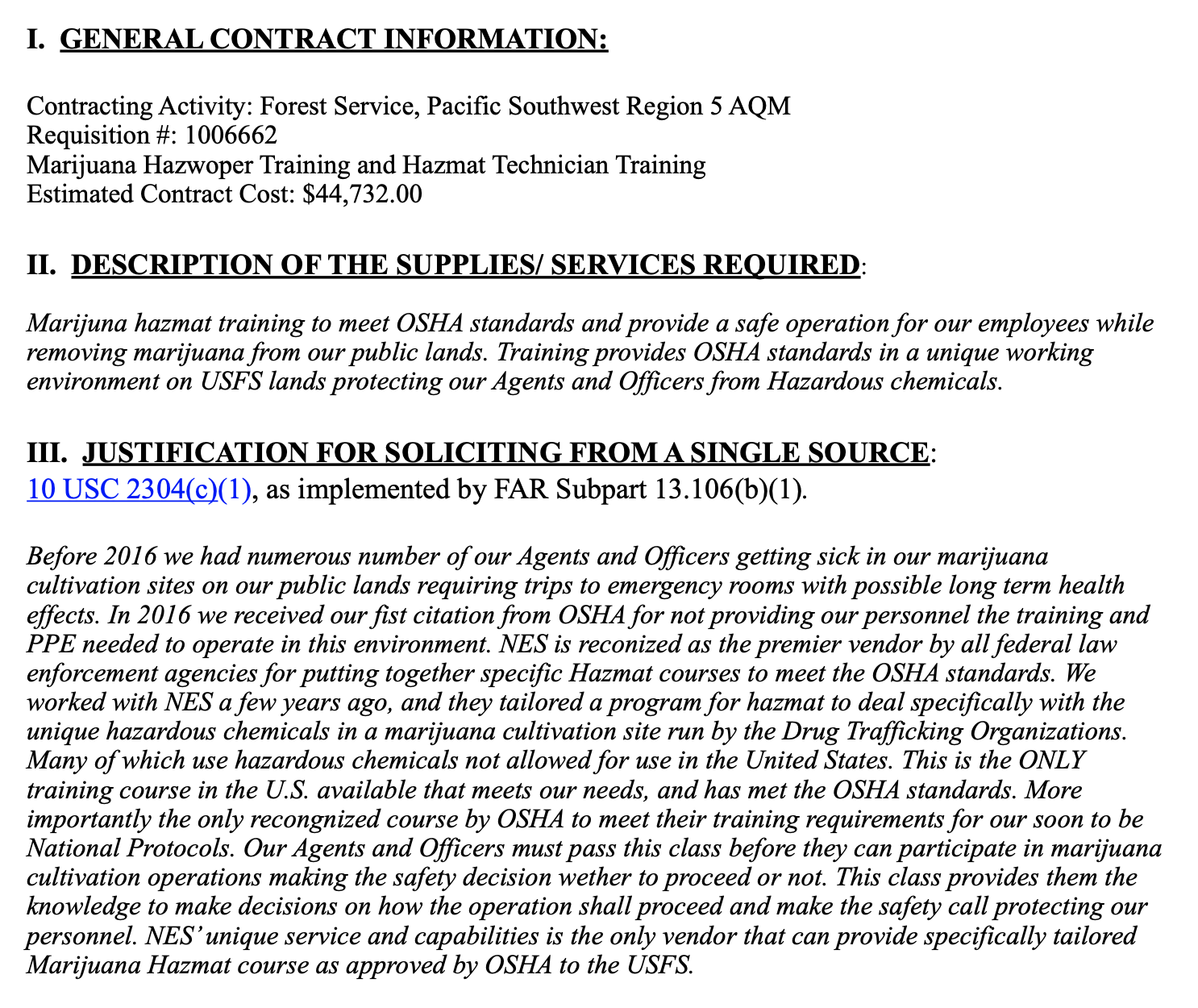 While marijuana has been grown clandestinely across the continent for generations, large-scale commercial grows hidden on public lands ramped up in the early 2000s, especially in California. Much of the marijuana fed the nation’s illicit market, but some also made its way to medical dispensaries, which were largely unregulated at the time.

Cannabis can be cultivated successfully in most environments without pesticides or chemical fertilizers, but many of the unregulated growers cut corners. They apply dangerous chemicals that pollute nearby waterways and fell entire sections of national forest to clear land.

The other potential contaminants at illegal grow sites appear to be the Forest Service’s chief concern. The document notes that many cultivation plots run by drug trafficking organizations “use hazardous chemicals not allowed for use in the United States.”

The Forest Service itself has come under fire for its handling of the sites. In April 2018, a watchdog report from the U.S. Department of Agriculture’s inspector general found that the Forest Service “does not always reclaim and rehabilitate marijuana grow sites after plants are eradicated, and FS is unaware of the overall impact these marijuana grow sites pose to the forest ecosystems.”

“As a result,” the watchdog said at the time, “trash and chemicals such as pesticides and fertilizers are still present on these grow sites, thereby putting the public, wildlife, and environment at risk of contamination.

It’s not clear from the new contract whether the CES-led training will include information on how to effectively remediate cultivation sites after marijuana plants have been cleared. The documents specifically mentions the health and safety of Forest Service employees but is silent on broader environmental impacts.

Opponents of marijuana prohibition have for years argued that many of the environmental and health threats posed by chemical contaminants could be effectively eliminated through legalization. Though enforcement is inconsistent, most states that have legalized cannabis for adults have set strict limits on pesticides and other chemicals that can be used by licensed growers.

“It is hardly a surprise that those who elect to clandestinely cultivate cannabis on federal lands engage in practices that provide greater potential risks to both the environment and to the end product itself,” Paul Armentano, deputy director for the advocacy group NORML, told Marijuana Moment. “By contrast, a legal market provides regulatory oversight and demands that those engaged in these activities be licensed and utilize best practices.”

“While legalization itself will likely not entirely eliminate the illicit market, just as, for instance, broader alcohol legalization has not eliminated moonshining in its entirety,” Armentano added, “the reality is that it will continue to severely curtail these activities and the involvement of criminal entrepreneurs.”

Even many in federal law enforcement officials seem to agree on that point. In February, the head of the union for U.S. Border Patrol agents acknowledged that state-level cannabis legalization is forcing criminal cartels out of the market.

“The states that have legalized marijuana,” said National Border Patrol Council President Brandon Judd, “have done more damage to the cartels than the [Drug Enforcement Administration] could ever think about doing.”