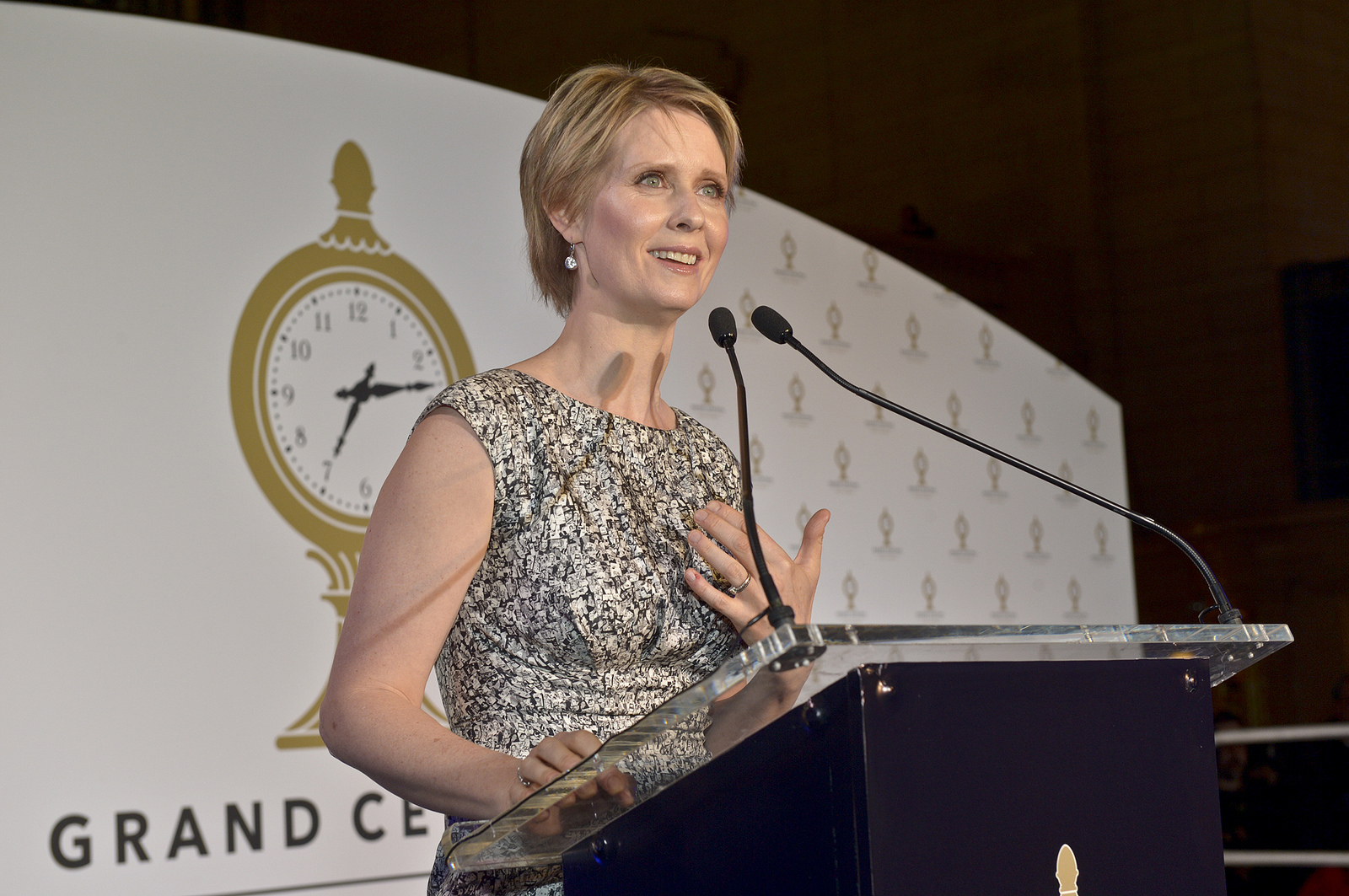 “It’s time for New York to follow the lead of 8 other states & DC and legalize the recreational use of marijuana,” she tweeted on Wednesday. “For me, what it comes down to is this: we have to stop putting people of color in prison for something that white people do with impunity.”

For me, what it comes down to is this: we have to stop putting people of color in prison for something that white people do with impunity.

The issue has political potency in her primary challenge against incumbent Gov. Andrew Cuomo (D), who opposes legalization despite the fact that a majority of the state’s Democratic voters support it.

A Siena College poll in February found that 66% of New York Democrats back ending cannabis prohibition. Only 30% agree with Cuomo that marijuana should remain illegal.

We got the #Receipts, @NYGovCuomo. Last year you attacked marijuana as a "gateway drug." pic.twitter.com/jB5KbipBfC

Cuomo, who pressured lawmakers to significantly scale back medical cannabis legislation before he signed it into law in 2014, wants the state to conduct an official study of the implications of broader legalization before joining the nine other states that have already ended prohibition for adults over 21.

But the legislature did not include the governor’s proposed study language in a budget agreement adopted last month.

Although lawmakers didn’t specifically earmark funds for the legalization study, the state Department of Health said it will proceed with the review anyway.

In response to questioning from reporters on Wednesday, Cuomo rejected the idea that New York is lagging behind other states on marijuana.

“I think we’re actually ahead on it,” he said. “We announced months ago that we were going to study the legalization issue precisely for that reason. You have Massachusetts, you have New Jersey talking about it — that would be a fundamentally different situation for the state of New York. On this issue there are many opinions, there are many cultural opinions, there’s a lot of division in the legislature and what we said is, let’s get the facts and let’s make the decision on the facts. I’m trying to depoliticize the issue. There’s widespread division. It’s not about signing the bill, it’s about passing the bill… To pass it you have to have consensus and I think the best way to forge consensus is on facts rather than on opinions, stereotypes, past experiences.”

Joel Giambra, a former Republican Erie County executive who is mounting an independent bid to challenge Cuomo’s reelection this year, agrees with Nixon that marijuana should immediately be legalized. His campaign commissioned its own report, which concluded that the move would generate $500 million in new annual tax revenue.

In a series of tweets and a YouTube video on Wednesday, Nixon pointed to the racial disparities in marijuana law enforcement as an important reason to legalize the drug.

“80% of New Yorkers arrested for marijuana are black or Latino,” she said. “The reality is that for white people, marijuana has effectively been legal for years. It’s time to legalize it for everyone else.”

The actress also pointed to the economic benefits of ending cannabis prohibition.

Legalizing marijuana can generate millions of dollars in tax revenue to improve the lives of all New Yorkers. pic.twitter.com/hhDDbhxULS

Her campaign launched an online petition about the issue through which she can collect email addresses and raise funds to support her bid against Cuomo. 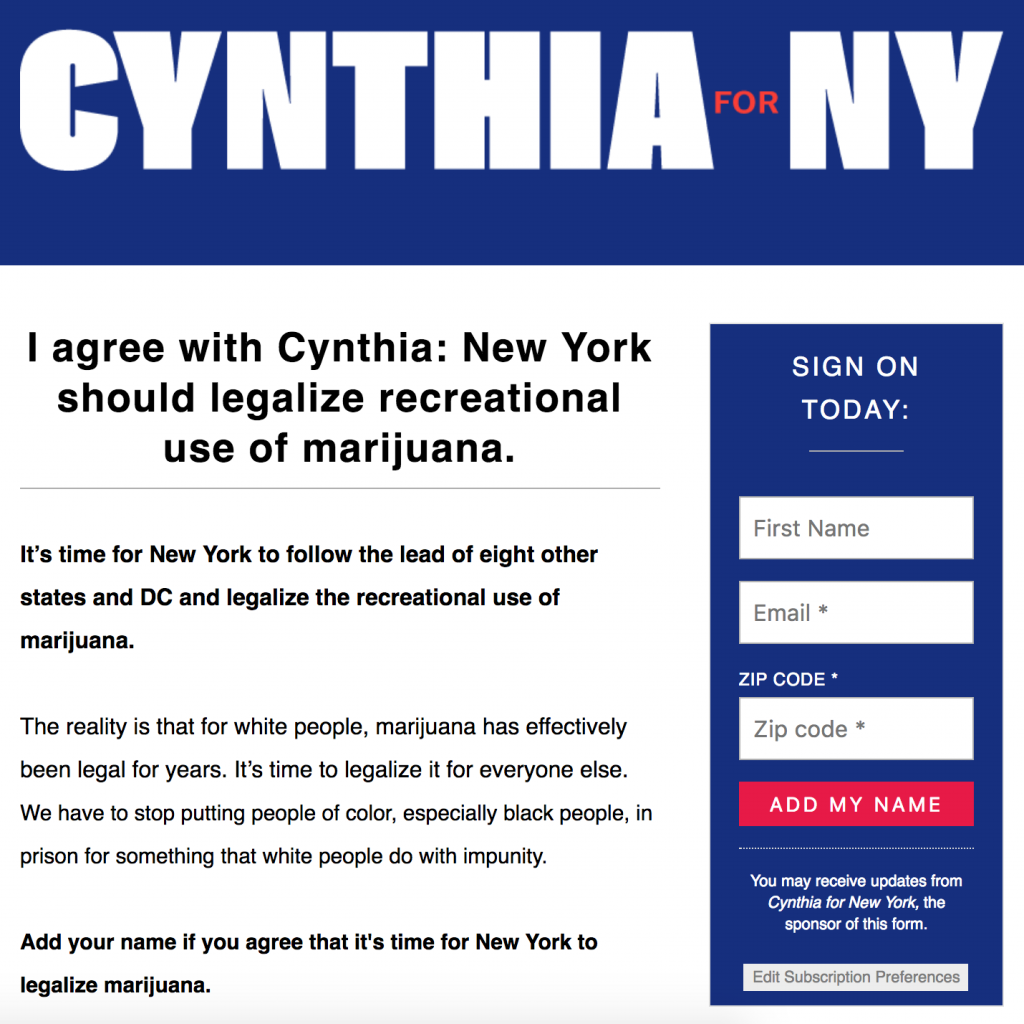 “Governor Cuomo says we need a study on this issue, but I believe that we need action,” Nixon said in an email blast about the petition.

Now that public opinion has shifted on marijuana, rich white men like Boehner and companies like Monsanto are trying to cash in. We can’t let them rake in profits while thousands of people, mostly people of color, continue to sit in jail for possession and use.

As Governor, I'll make sure that it's not just rich white men who make billions off a product that sends thousands of black people to jail. We're going to create jobs and opportunity in the communities most devastated by the racist War on Drugs. https://t.co/Q04tCa96eH