New data from the District of Columbia Metropolitan Police Department, released last week, shows that arrests for marijuana-related infractions in the nation’s capital rose substantially again from 2016 to 2017. In particular, busts for distribution have skyrocketed, while huge racial disparities in arrests continue unabated. 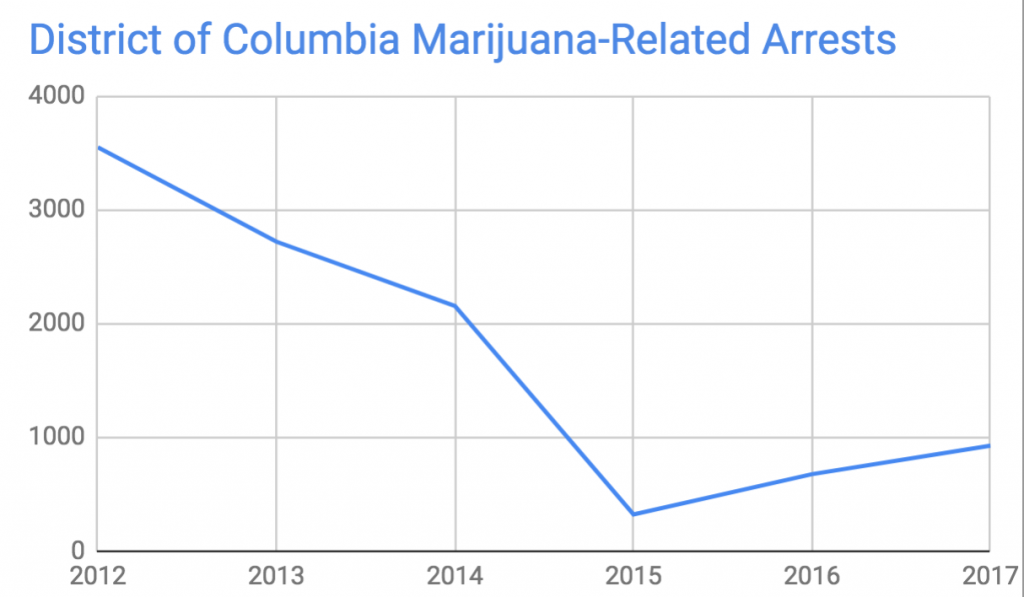 The numbers had fallen dramatically in 2014 and 2015 after the Marijuana Possession Decriminalization Amendment went into effect in July 2014 and Initiative 71 went into effect in February 2015. The Amendment, approved by the D.C. Council in July 2014, decriminalized possession of up to one ounce. The Initiative, approved by 65 percent of voters that November, allows adults 21 and older to possess up to two ounces of marijuana, grow up to six plants and “gift” up to one ounce of cannabis to another adult.

But sales remain banned despite support from a majority of councilmembers and Mayor Muriel Bowser (D). That’s because Congress continues to attach language to annual funding bills that prevents D.C. from spending its own money to legalize and regulate the marijuana trade.

Overall marijuana arrests in the District have steadily increased in the two years since the initial drops following decriminalization and limited legalization, and a Marijuana Moment analysis of the new data shows that the rise appears to be related to the lack of a legal supply chain for cannabis.

In 2015, only 323 people were arrested for marijuana possession, consumption or distribution. In 2016, that number doubled, and 2017 arrests are nearly triple what they were in 2015. While not anywhere close to pre-decriminalization 2012 or 2013 numbers, the trend is unmistakable.

Strikingly, the type of charges made for cannabis-related arrests has been inverted in the last six years. 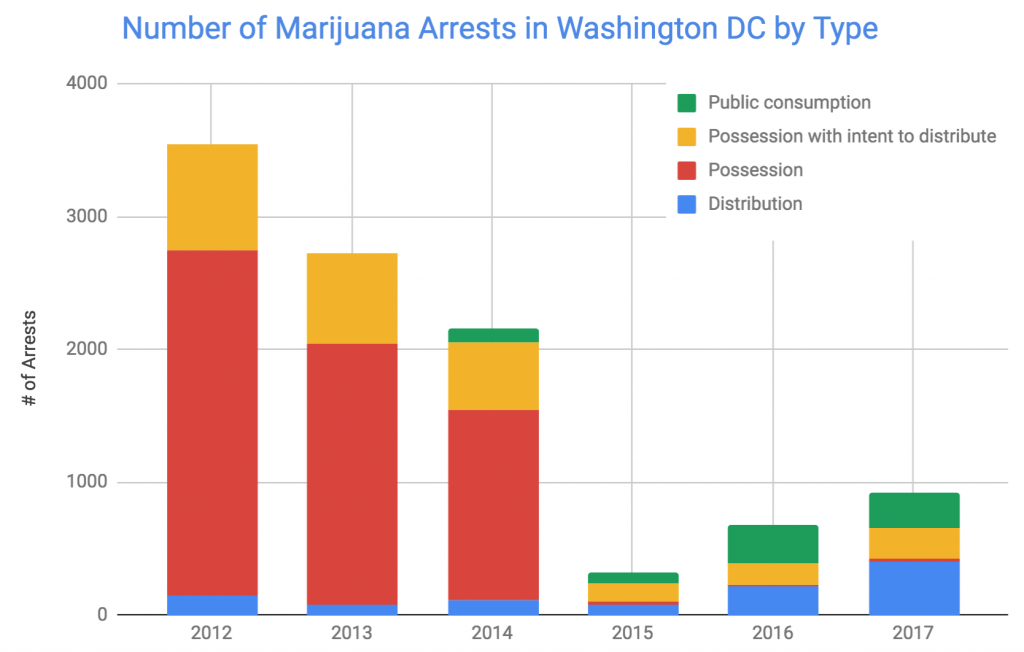 Since possession of limited amounts of cannabis is now legal in the District, possession arrests are rare (only 35 total in 2016-17). In turn, public consumption rates rose markedly in 2015 and 2016, but fell slightly in 2017 as police began applying more serious distribution charges more frequently.

Percentage-wise, the growth in distribution arrests is startling. In 2012, distribution accounted for only 4 percent of arrests. In 2017, it was 43.5 percent. Even by raw numbers, distribution arrests have soared. This type of bust rose 83 percent from 2016 to 2017, and nearly five times as many people were arrested on this charge in 2017 than in 2013 (403 and 83, respectively).

(If someone is arrested on multiple marijuana charges, only the most serious charge is listed in the data.) 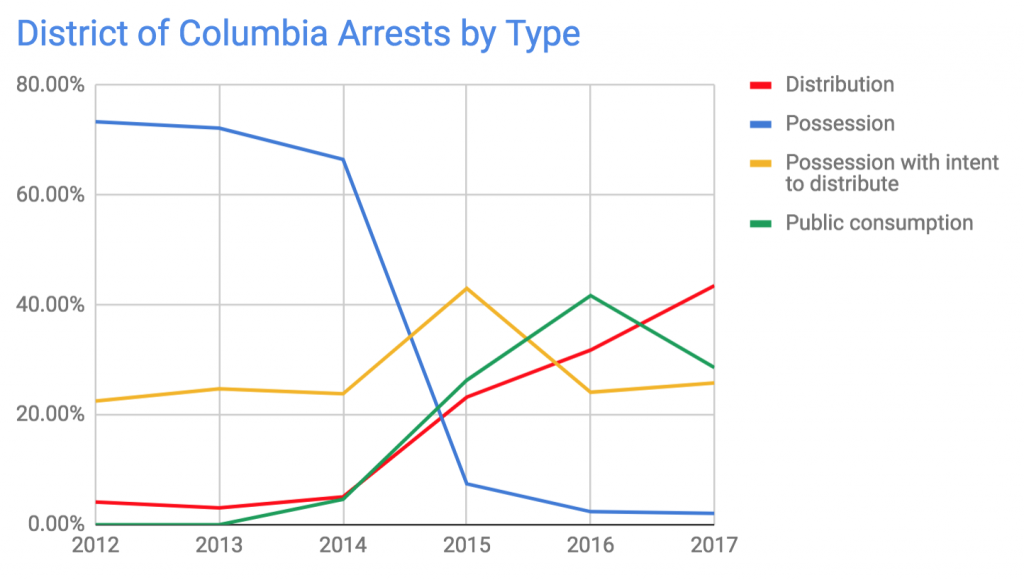 In recent months, dozens of arrests have been made at “pop up events” that have emerged in the city in response to the “gifting” language in the law. Typically, vendors will sell unrelated products such as juices or shirts, and “gift” cannabis to those customers for free. But since the overall transactions require remuneration in the form of the supposedly unrelated purchases, police have said they violate city law.

Local legislators have proposed both regulated sales and social use over the last few years, but Congress has exerted its influence multiple times to prevent such measures from moving forward.

“Thanks to Congressional interference prohibiting the District from regulating marijuana, rather than collecting tax revenue and ensuring product safety, we are wasting resources and wreaking havoc on young people’s lives with continued arrests for marijuana use,” Kaitlyn Boecker, policy manager for the Drug Policy Alliance, told Marijuana Moment in response to these latest numbers. “It’s absurd that despite legalization in the District, MPD continues to make such arrests. As former MPD Chief Cathy Lanier said years ago, ‘All those arrests do is make people hate us.’”

The out-of-whack percentage of African Americans arrested in the District of Columbia for marijuana violations has been the subject of scrutiny for years now. The U.S. Census Bureau puts the African American population of the District at 47 percent and white (non-Hispanic) at 37 percent. But as this set of data reveals, for every 10 people arrested for a marijuana violation, nine of them are black.

In 2016, the numbers seemed to be improving slightly, with the share of African American cannabis arrests down 3.5 percentage points, but in 2017, the numbers rose slightly to return to 91 percent of arrests. Non-Hispanic Whites represented only 4 percent of arrests. In real numbers, 794 people coded “black” by the arresting officer were arrested in 2017, while only 35 people coded “white” but not “Hispanic” were arrested. 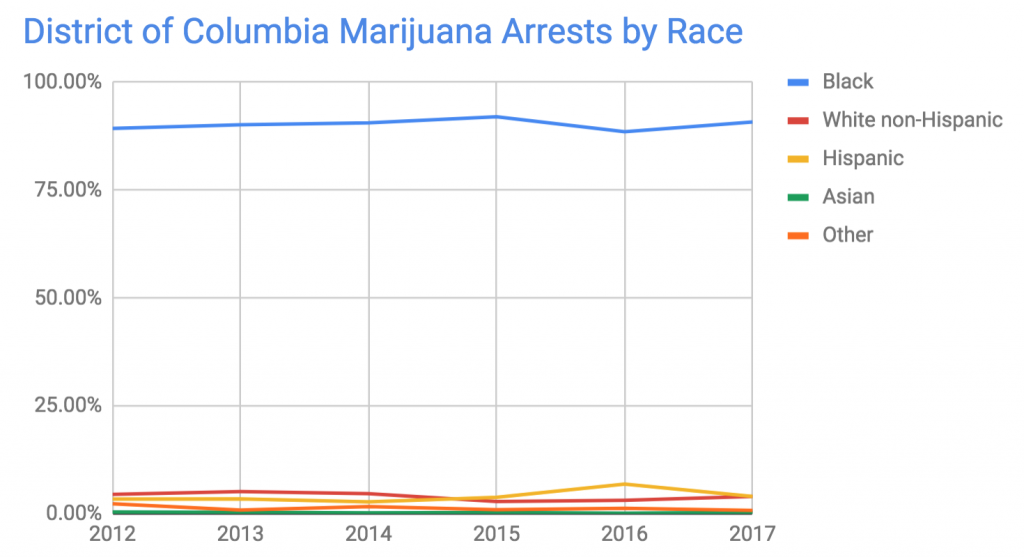 (A note on the data: Race is not recorded for arrests of juveniles. D.C. police say, “Race and ethnicity data are based on officer observation, which may or may not be accurate.”)

“The war on drugs has always been a war on people, particularly on people of color,” said Boecker. “Initiative 71 was passed by voters in large part to eliminate racial disparities in marijuana arrests, but due to racial bias and uneven enforcement, four years later Black men continue to be overwhelmingly targeted for arrests. This is unacceptable and must stop. Marijuana arrests do not advance public health or safety, and violate the will of the voters.”

Age of Those Arrested

The numbers of those 21-29 arrested, by far the age group with the most arrests each year, fell and rose in tandem with these fluctuations in the younger cohort (down 5 percent in 2016, then back up a couple of points in 2017). 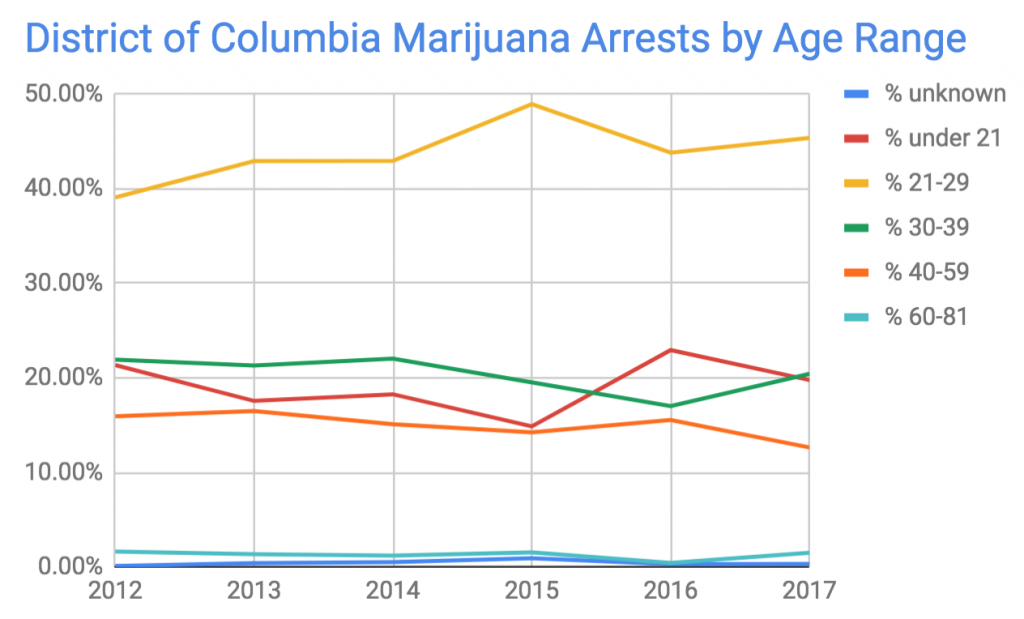 Federal and Local Policies Both to Blame, Activists Say

Overall the new police data shows that while legalization of low-level possession and home cultivation in D.C. has driven a significant decline in marijuana arrests overall, discriminatory enforcement continues and issues related to the lack of a legal supply chain persist.

In addition to the congressional regulatory blockade, he pointed to the city’s own ban on public cannabis consumption as being partially at fault for the recent uptick in marijuana arrests.

“As a result people in public housing that does not allow cannabis use choose to consume outside risking arrest rather than smoke in their homes and risk eviction,” Eidinger said. “This catch 22 situation for cannabis users, including people carrying a medical card from the D.C. government, is the policy leading to more arrests.”

North Dakota Likely To Vote On Marijuana Legalization In November