Ben & Jerry’s wants to remind people this 4/20 that hundreds of thousands of people are still getting arrested for non-violent marijuana offenses.

As a growing number of companies compete to win over consumers with weed-themed promotions and social media gimmicks surrounding the cannabis holiday, the ice cream giant is pointing out ongoing racial disparities in marijuana enforcement—including in states that have legalized it.

“Happy 4/20, everyone! Now that pot is legal in 33 states and counting, it’s a pretty heady moment for stoner culture. Fans of cannabis can celebrate 4/20 openly and in style in more places than ever before,” they company wrote in a blog post on Friday. “And even if you’re not in a state that legalized pot, there’s a still a pretty good chance that the cops won’t hassle you as you spend 4/20 doing your thing.”

“If you’re a white person.”

The blog goes into detail about racial disparities in the legal industry, disproportionate arrest rates in states like Colorado and also notes that while Republican former House Speaker John Boehner’s stance on cannabis has evolved—from prohibitionist to marijuana firm board member—it also reflects a problematic willingness to profit off the legal industry without recognizing the criminal justice reform work that’s still to be done.

This 4/20, we're getting real about cannabis justice. Learn more about who's making $$$, who's being penalized, and why it matters: https://t.co/DPCcqND0SI pic.twitter.com/GxFFzMnuB1

Increased support for cannabis reform, including from former opponents, is “good news,” the company wrote. “What’s troubling is that the criminal justice system hasn’t kept up with the culture.”

Ben & Jerry’s is calling on Congress to expunge the records of individuals with prior marijuana convictions and pardon anyone “whose only crime was possession of cannabis.” The company is also applauding city officials who’ve proactively expunged marijuana records and prosecutors who’ve announced that their offices would no longer be pursing low-level cannabis crimes.

“Want to feel really really good this 4/20? Then let’s make sure that legalization benefits all of us. That’ll turn 4/20 into a day that we all can celebrate.”

To that end, the company is teaming up with San Jose marijuana dispensary Caliva, which is donating 4.20 percent of profits from 4/20 sales to support Code for America’s effort to automatically expunge past cannabis convictions.

Our friends at @gocaliva will be donating 4.20% of their profits on 4/20 to @codeforamerica in recognition of their project, Clear My Record, which works to give people a second chance by clearing cannabis records. All the more reason to celebrate the holiday!" pic.twitter.com/yREQDh9163

They’re also linking to a petition that people can sign to show their support for comprehensive marijuana reform and, to sweeten the deal, they’re offering a a free pint of their “Half Baked” ice cream blend to anyone who orders a cannabis delivery from Caliva.

Stock up for the holiday! Order delivery from @gocaliva or shop their #SanJose, CA dispensary and get a FREE pint of Half Baked! Order here: https://t.co/3nFr2omYbm pic.twitter.com/nMRKzw4dzT

“At this point where a company can’t just invoke 4/20 for laughs or give lip service to social justice, it’s great to see a campaign use the holiday to call attention to concrete solutions around ‘cannabis justice,'” Shaleen Title, who holds the social justice seat on the Massachusetts Cannabis Control Commission, told Marijuana Moment.

Meanwhile, other mainstream brands are launching 4/20-themed campaigns of their own—most of which don’t address the historical harms of prohibition enforcement.

Fast food chain Carl’s Jr., for example, is hoping to turn out the 4/20 crowd in Denver by selling a burger with CBD-infused sauce on the marijuana holiday. The burger will cost $4.20 and all of the proceeds will go to…the company.

While that move caught plenty of media headlines—in part because the Food and Drug Administration has repeatedly said that adding CBD to the food supply remains prohibited—Carl’s Jr. is far from alone in its overt campaign to leverage the holiday without addressing the inherent privilege it represents.

Pizza Hut is offering a Triple Chocolate Brownie for $4.20 on Saturday. 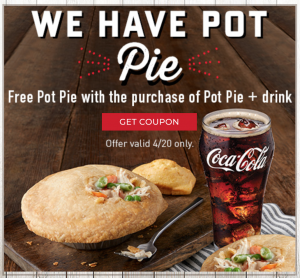 All joking aside, tomorrow only buy one Pot Pie & a drink and get one Pot Pie FREE. https://t.co/0I4ZYfc4gf

“It is unfortunate to see the white-washing and commercialization of 4/20 by corporate interests with no stake in the fight for marijuana justice,” Erik Altieri, executive director of NORML, told Marijuana Moment. “While the news will undoubtedly focus on light hearted celebrations, it is imperative we remember that every year over 600,000 Americans are still arrested for simple marijuana possession, those arrested are overwhelmingly people of color and other marginalized communities.”

“While there is still much to celebrate in regards to the progress we have made, we still have a long way to go to right the wrongs of prohibition,” Altieri said. “Instead of focusing on a quick way to get rich, marijuana-related businesses should follow Ben and Jerry’s lead and they must take seriously their social obligation to advance social justice and civil liberties as members of the nascent cannabis industry.”

New York-based Fresh&Co rolled out a line of marijuana-themed offerings like “half-baked salad.”

GrubHub analyzed its own sales data to show what food items were the most popular on 4/20 before and sent out an email blast on the findings.

“Let us be blunt. The ultimate stoner holiday is around the corner, and if there’s one thing Grubhub knows, it’s that one crucial ingredient of a successful 4/20 is food,” GrubHub wrote. “The munchies are a natural side effect of smoking marijuana, so why not indulge on the hungriest day of the year?”

Ridesharing service Lyft—in a promotion that at least advances a harm reduction message—announced that it is offering a $4.20 credit for a single ride in Colorado and various select cities throughout the U.S. and Canada where marijuana is legal—similar to what it did last year.

“Kick back and enjoy 4/20 with the help of Lyft and our designated drivers,” the company wrote. “We’ve partnered with some great folks to help you get to the park, to the store, and back to the couch — easier than ever.”

Increasingly, advocates and some lawmakers are growing frustrated by the country’s lighthearted, or profit-driven, attitude toward cannabis reform. Sen. Cory Booker (D-NJ) no longer wants people to talk to him about legalization without making restorative justice for those harmed by prohibition a key part of the conversation.

Congressional Democrats also held a panel at a recent policy retreat that centered on social equity in the cannabis industry. That marijuana should be legal was regarded as a given, but more to the point, a legal system should lift up those who’ve been disproportionately targeted by the drug war.

Legalization advocate and rapper Killer Mike, whose birthday happens to coincide with the cannabis holiday, said in a press release on Friday that 4/20 should remind people of the need to decriminalize cannabis.

“While there has been progress, we should go one step further and ensure that the very people (African Americans) who have been profiled and punished due to the War on Drugs, have an opportunity to participate in the commercialization of marijuana,” he said. “It is not enough to decriminalize weed, promote its sale in local economies and not think creatively about how Black people can benefit from the very thing that has directly impacted their lives.”