If Arkansas voters approve a marijuana legalization initiative on the ballot this November, the market could see nearly $1 billion in annual cannabis sales and more than $460 million in tax revenue over five years, according to a new economic analysis. That’s in addition to the job growth it would drive and its overall economic impact.

The legalization campaign Responsible Growth Arkansas commissioned the report, which was conducted by the Arkansas Economic Development Institute (AEDI) and released on Wednesday.

“The measurable economic impact of introducing an adult-use marijuana market, including economic activity diverted from illicit markets, is estimated to increase state gross domestic product by up to $2.36 billion over five years and increase employment of up to 6,400 jobs by 2027,” Michael Pakko, chief economist at AEDI, said in a press release.

The five-year analysis found that Arkansas could see yearly sales reaching $984 million by 2027. Over the full half-decade scope of the projection, there would be $163.1 million in revenue the standard state sales tax on marijuana purchases alone. That’s in addition to the estimated $303.6 million in revenue from the supplemental 10 percent cannabis tax imposed under the proposed constitutional amendment. 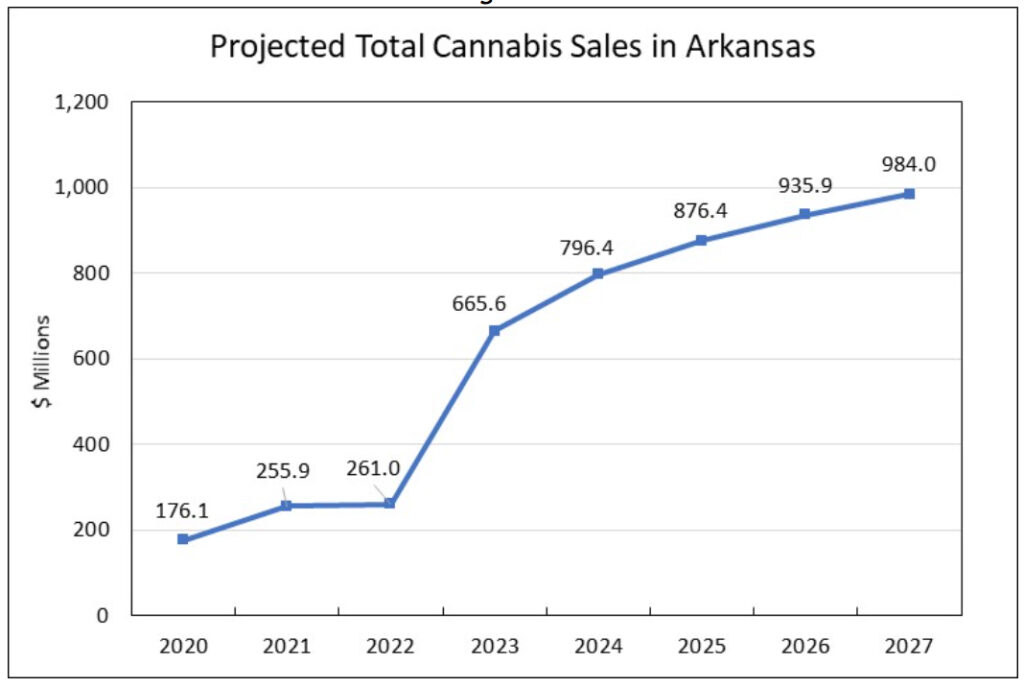 The economists broke down how that supplemental revenue would be distributed according to the initiative: $45.5 million in annual stipends for law enforcement, $34 million for the University of Arkansas for Medical Sciences, $15.2 million for drug courts in the state and $212.5 million for the general fund.

“Well-funded police departments are critical for our local communities. As a former Sheriff, I am proud to support and vote for the Arkansas Adult Use Cannabis Amendment, aka Issue 4,” Lance Huey, vice chairman of Responsible Growth Arkansas said. “Issue 4 will keep our communities and children safer by providing much-needed funding for law enforcement and drug courts.” 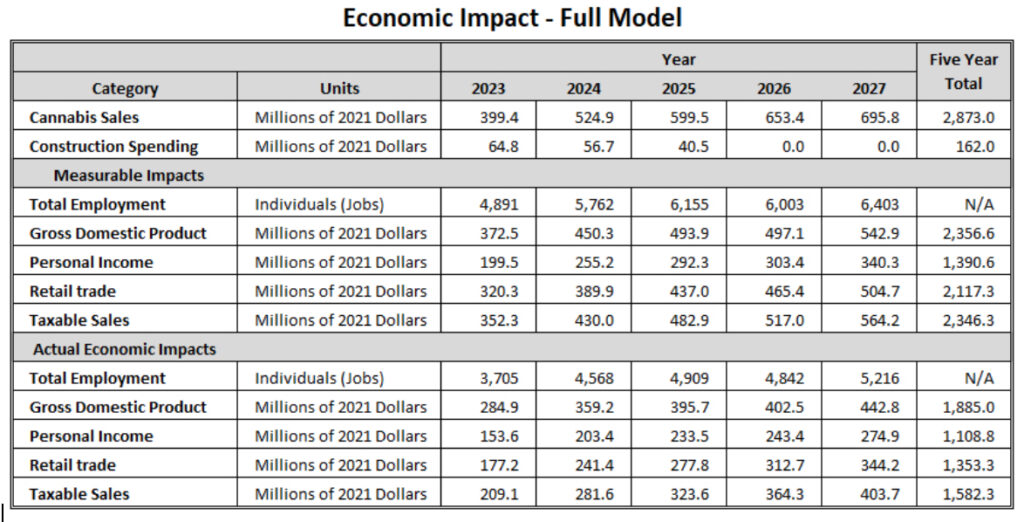 In the first year of implementation alone, combined adult-use and medical marijuana sales are expected to double compared to the current sales for medical cannabis alone.

AEDI gave two sets of economic estimates, one that accounts for the “measurable” impact of diverting sales from the illicit market and another that looks at the “actual economic impact” with factoring in that diversion.

For the former analysis, the economists predicted that marijuana legalization would increase Arkansas’s GDP by $2.36 billion over five years and create up to 6,400 jobs by 2027. The latter shows GDP growing by $1.89 billion, with 5,200 new jobs.

The analysis further explains that the estimates of potential revenue—which were determined by looking at Arkansas’s population and conducting an analysis based on the experiences of other states that have legalized cannabis for adult use—factor in the likely possibility that the state market will attract out-of-state visitors.

Even after removing that component of the analysis, AEDI still found that Arkansas will see GDP increase by $1.7 billion and take in $240 million in tax revenue from 2023 to 2027.

“We are officially on the ballot and have a great story to tell the voters of Arkansas,” Eddie Armstrong, chairman of Responsible Growth Arkansas, said. “Voters can create a new adult-use cannabis industry by voting FOR issue 4 on November 8th. Issue 4 will provide Arkansans with thousands of new good-paying jobs and hundreds of millions in new tax revenue.”

It wasn’t certain that votes for initiative would be counted even after signatures turned in by activists were certified by the state. The Board of Elections rejected the measure after determining that the ballot language was insufficient, prompting the campaign to file a lawsuit with the Arkansas Supreme Court.

After weeks of uncertainty, the court ruled in favor of the campaign last week, ensuring that votes would be counted for the initiative.

A poll released this month found that 59 percent of likely voters support the legalization ballot measure.

The pro-legalization campaign isn’t taking passage for granted, however, and released an ad last month that tells residents that a vote to legalize marijuana in the state is a “vote to support our police” based on the revenue allocation.

Meanwhile, several Republican elected officials in the state are vocally opposing the measure.

For example, Gov. Asa Hutchinson (R)—a former Drug Enforcement Administration head—suggested it was a given that the measure would end up before voters and urged police to help campaign against it.

Here’s what the campaign’s marijuana legalization initiative would accomplish:

Adults 21 and older could purchase and possess up to one ounce of cannabis from licensed retailers.

Home cultivation would not be allowed.

The measure would make a series of changes to the state’s existing medical cannabis program that was approved by voters in 2016, including a repeal of residency requirements to qualify as a patient in the state.

The state Alcoholic Beverage Control (ABC) Division of the Department of Finance and Administration would be responsible for regulating the program and issuing cannabis business licenses.

Regulators would need to license existing medical cannabis dispensaries to also serve adult consumers, and also permit them to open another retail location for recreational marijuana sales only. A lottery system would award licenses for 40 additional adult-use retailers.

There are no provisions to expunge or seal past criminal records for marijuana or to provide specific social equity licensing opportunities for people from communities harmed by the war on drugs.

The state could impose up to a 10 percent supplemental tax on recreational cannabis sales, in addition to the existing state and local sales tax.

Tax revenue would be divided up between law enforcement (15 percent), the University of Arkansas for Medical Sciences (10 percent) and the state drug court program (five percent). The remaining revenue would go to the state general fund.

People who own less than five percent of a marijuana businesses would no longer be subject to background checks.

The legislature could not repeal or amend the state’s medical marijuana statutes without voter approval.

Local governments could hold elections to prohibit adult-use retailers in their jurisdiction if voters approve the decision.

Individuals could now own stake in more than 18 dispensaries.

There would be advertising and packaging restrictions, including a requirement that marijuana products must be sold in tamper-resistant packages.

Dispensaries would be able to cultivate and store up to 100 seedings, instead of 50 as prescribed under the current medical cannabis law.

Responsible Growth Arkansas is just one of several campaigns that have pursued cannabis reform through the ballot this year, though backers of competing initiatives have since acknowledged they wouldn’t be able to collect enough signatures to qualify this year.

Supporters of the separate campaigns, Arkansas True Grass and Arkansans for Marijuana Reform, have raised concerns with the provisions of the Responsible Growth Arkansas initiative, suggesting it would favor big businesses in the existing medical cannabis industry. Some have said they may look to 2024 to try again with their own approaches.

Stephen Lancaster, a spokesperson for Responsible Growth Arkansas, previously told Marijuana Moment that the campaign hopes that won’t be necessary. His campaign feels that the constitutional amendment provides a sound infrastructure for reform that prioritizes regulations—and the plan is to push for further reforms in the legislature if voters approve legalization at the polls. That would include efforts to promote expungements, which isn’t addressed by the initiative.

Read the full economic analysis of the Arkansas marijuana initiative below:

Colorado And Washington Got More Tax Revenue From Marijuana Than From Alcohol Or Cigarettes In Fiscal Year 2022, Report Finds