A majority of Americans familiar with cannabidiol (CBD) say it should be available as an over-the-counter drug and that the compound has multiple health benefits, according to a Gallup survey released on Friday.

The CBD craze emerged from the marijuana reform movement and escalated following the passage of the 2018 farm bill, which federally legalized hemp and its derivatives including CBD. The survey, which involved 1,017 phone interviews conducted from May 15-30, offers some insight into the substance’s widespread appeal.

Thirty-nine percent of Americans overall said that people should be able to access CBD as an over-the-counter drug, with 21 percent saying a prescription should be required. Thirty-six percent of respondents said they weren’t familiar with the non-intoxicating compound.

But when Gallup asked people who said they were familiar with CBD the same question, 61 percent said that CBD should be over-the counter and 33 percent said it should be available for those with a prescription.

Again zeroing in on those who said they were familiar with CBD, Gallup asked what they thought about its therapeutic value. 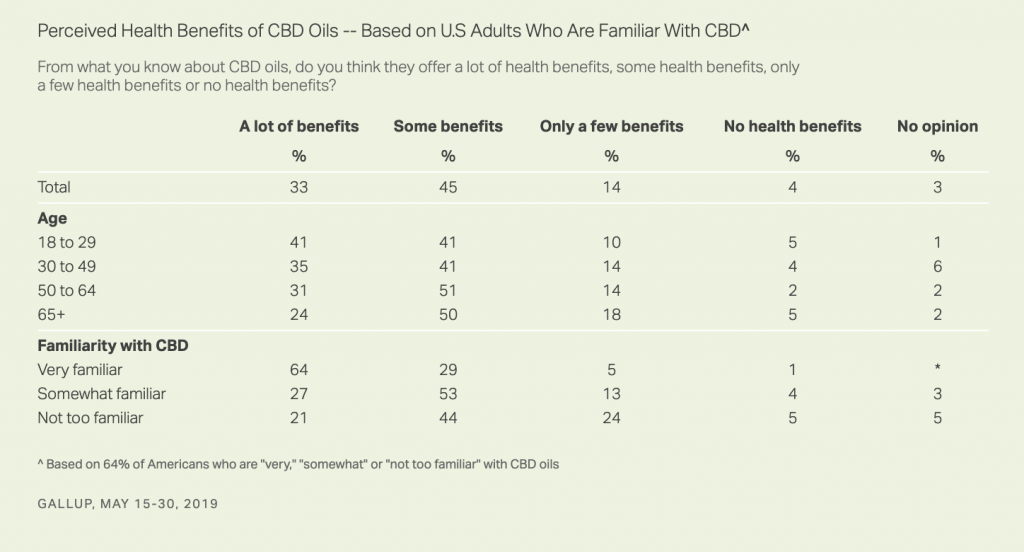 “The CBD-oil arena is extremely active right now, including medical research into its benefits, state legislation governing its sale, federal legislation encouraging its production and corporate investment growing in the business,” Gallup wrote. “Although medical research has a long way to go to investigate all of the claims made about CBD, half of Americans already believe it has at least some medical value, and that percentage is likely to grow as more become familiar with the product.”

The commercial interest in CBD is explosive, with lawmakers and industry stakeholders putting pressure on federal agencies like the Food and Drug Administration (FDA) to streamline the regulatory process to provide for the compound’s lawful marketing in the food supply and as health supplements.

But even as the government develops those regulations, companies are wasting no time, flouting the FDA and putting CBD in everything from pricey lattes to Carl’s Jr. burgers. At the same time, CBD’s medical value has been strongly established; the FDA approved a CBD drug last year for the treatment of certain forms of epilepsy.

Congress Will Consider Lots Of Marijuana Amendments Next Week