Marijuana reform advocates on Tuesday are marking the 50-year anniversary of a federal report recommending cannabis decriminalization that was compiled by a commission appointed by the drug warrior President Richard Nixon—calling attention to the fact that, half a century later, even the current Democratic president who campaigned on ending cannabis criminalization has yet to take action.

When Nixon appointed the so-called Shafer Commission in the early 1970s to research and issue a report on federal marijuana laws, most people expected it to bolster the administration’s position that cannabis was a dangerous drug that ought to be criminalized. But that’s not what members concluded in their report.

The panel, which was formally titled the “National Commission on Marihuana and Drug Abuse,” found that while marijuana use might pose some health risks, the policy of criminalization is excessive and unnecessary. The report from the 14-member commission, which had been appointed by Nixon himself and congressional leaders, recommended decriminalization—a policy that has yet to be enacted federally despite the fact that the current President Joe Biden endorsed it on the campaign trail.

Now, activists at national advocacy groups like NORML and the Marijuana Policy Project (MPP) are marking the 50th anniversary of what has come to be know as the Shafer report—named after the body’s chairman, former Pennsylvania Gov. Raymond Shafer (R)—by reminding people that even a half a century later, hundreds of thousands of Americans continue to be arrested over cannabis each and every year.

During an MPP press event on Tuesday, the author of the Shafer report reflected on the significance of the commission’s decriminalization recommendation. Asked about his thoughts on when a federal policy change might finally be enacted, Richard Bonnie told Marijuana Moment said that “it’s a hard question to answer because it’s the federalism problem here.”

“It has just been shocking to me that Congress has not gotten its act together for decades when it’s clear that something needs to be done about federal law,” he said. “And of course, everything that’s happening in the legalized states is totally contrary to federal law. I mean, this is absurd.”

Of course, the Nixon administration ignored its own commission’s report and the drug war has continued to derail lives and cost countless dollars, even as more and more states continue to adopt legalization and the cannabis market expands.

Given that Nixon’s own domestic policy advisor, John Ehrlichman, later conceded that the president’s insistence on criminalizing people over drugs was part of a political ploy to undermine “the anti-war left and black people,” it’s no surprise that the administration declined to act on the commission’s report. But 50 years later—with a current Democratic president who campaigned on a platform of cannabis decriminalization, rescheduling and more—advocates are left wondering: what more is it going to take to finally enact federal reform?

MPP released its own report on Tuesday that examines the 19 states where possessing small amounts of marijuana still comes with the threat of jail time. 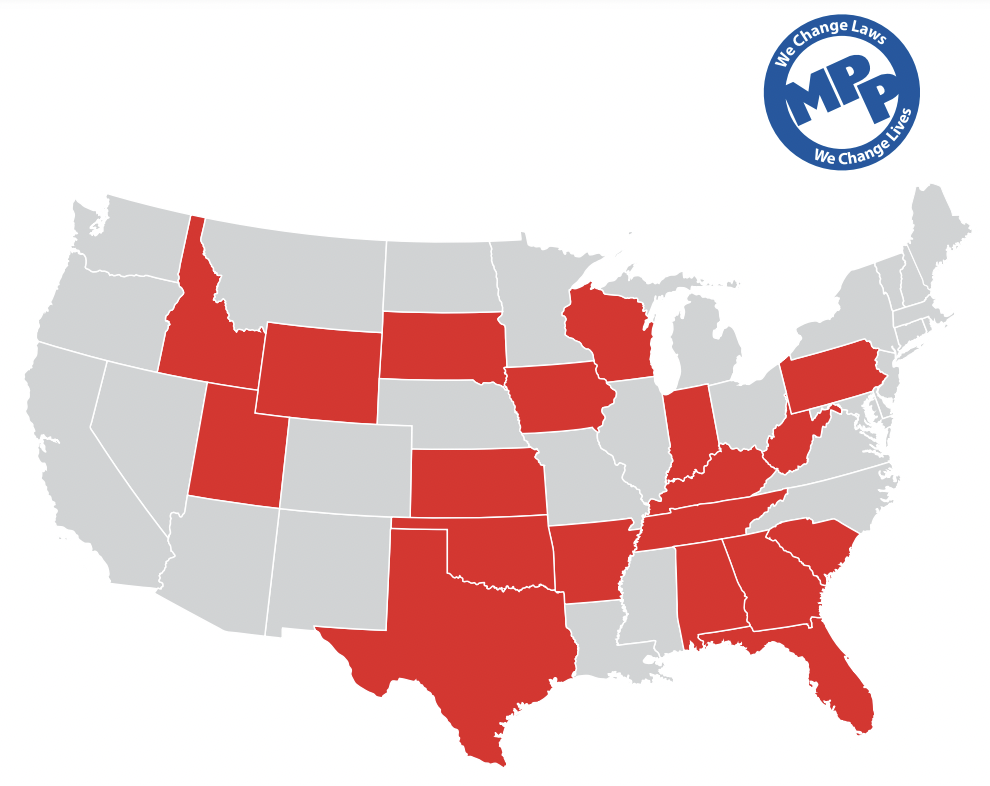 “In the states that have reformed their laws to stop jailing individuals for simple cannabis possession, the laws are working well,” the MPP report says. “They save thousands of individuals from involvement in the criminal justice system and the harsh collateral consequences a criminal conviction carries while freeing up law enforcement resources to focus on more serious crimes.”

But that’s not the case in states that continue to insist on keeping laws on the books that say someone can go to jail just for possessing a small amount of marijuana.

“While resources are wasted arresting and prosecuting hundreds of thousands of cannabis consumers each year, many violent crimes go unsolved. In fact, more people were arrested for cannabis in 2019 than for all violent crimes combined,” MPP wrote. “With priorities dangerously misguided, many states, for example, maintain large backlogs of untested rape kits. This means that these sexual assaults have been reported but are still not being investigated due to limited resources, causing serial predators and other assailants to remain at large.”

In addition to the event with Bonnie, the commission report author, MPP also held press briefings on Tuesday with lawmakers from states that have not yet enacted decriminalization, such as Pennsylvania and Texas.

What did the federal Shafer report conclude?

Beside the former Pennsylvania governor who served as chairman, the commission was also comprised of lawmakers, academics, doctors, attorneys and even one television producer.

The panel’s report stated plainly that “criminal law is too harsh a tool to apply to personal possession even in the effort to discourage use.”

“It implies an overwhelming indictment of the behavior which we believe is not appropriate. The actual and potential harm of use of the drug is not great enough to justify intrusion by the criminal law into private behavior, a step which our society takes only with the greatest reluctance,” it said.

The recommendation is what’s come to be known as decriminalization, a policy that’s been adopted in a multitude of states as attitudes around marijuana have evolved, the plant’s therapeutic potential has become more widely known and people acknowledge the long-term consequences of criminalization, particularly low-income and minority communities.

“The commission’s recommendation to end marijuana possession arrests was totally unexpected at the time, with most observers anticipating the commission to reinforce Nixon’s exaggerated fears of marijuana and to continue to support criminal prohibition,” NORML Founder Keith Stroup said in a press release. “The report was truly groundbreaking then and it has stood the test of time and remains pertinent now.”

For 50 years at the federal level, the recommendations have been ignored—not just by Nixon but also by each of the nine Democratic and Republican presidential administrations that have come to follow. Past presidents have admitted to past cannabis use. President Joe Biden pledged to decriminalize cannabis, reschedule it, expunge prior records, legalize medical marijuana and let states set their own policies without federal interference.

“We should decriminalize marijuana,” he said during a town hall event in October 2020, adding, “I don’t believe anybody should be going to jail for drug use.”

But after more than a year in office, he’s taken no meaningful step to achieve those modest reforms. In fact, his administration has faced criticism after it was reported that it had punished certain staffers for being honest about marijuana use. His first budget proposal also recommended continuing a GOP-sponsored rider to continue preventing Washington, D.C. from using its local tax dollars to legalize marijuana sales.

The president remains out of step with the super majority of his party that supports adult-use legalization. It’s a disconnect that continues to baffle and frustrate advocates who had hope to see some positive steps toward reform with Democrats in control of both chambers of Congress as well as the White House.

“The fact that this report was ignored by the federal government for half a century while countless individual’s lives—and entire communities—were upended and marginalized by misguided cannabis prohibition policies is a stain on our country, but it doesn’t have to continue,” Morgan Fox, political director of NORML, said.

In its report, MPP concludes by saying that “50 years after the Shafer Commission recommended decriminalization, it is long past time for these states to start taking a more just, commonsense, and fiscally responsible approach to cannabis policy.”

“Short of legalization, states should stop needlessly ensnaring thousands of their residents in the criminal justice system each year,” it said. “Now is the time for the remaining 19 states that still criminalize to reclassify possession of one ounce or less of cannabis as a civil infraction, replacing the criminal offense with a small civil fine and wiping away the criminal records of offenders convicted under the old, overly harsh laws.”