The survey that was released on Thursday included two cannabis banking questions: the first generally polled respondents on whether they feel marijuana businesses should be able to access basic financial services and the second asked if Congress should do something about it.

Support was consistent for both, with 66 percent of respondents saying they favor the proposals, including 37 percent who said they “strongly” support them. Only 16 percent of Americans said they oppose having lawmakers enact marijuana banking reform. 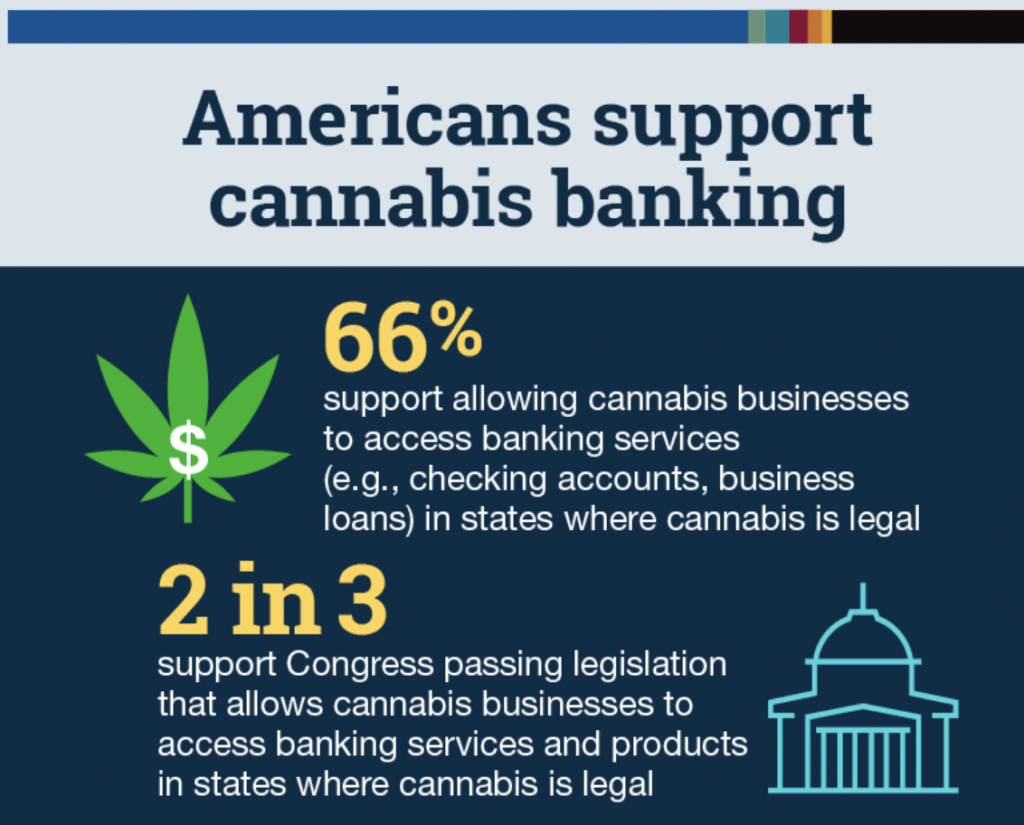 “Americans firmly believe that now is the time to resolve the ongoing conflict between state and federal law to allow banks to serve legal cannabis and cannabis-related businesses,” ABA President and CEO Rob Nichols said in a press release. “We urge Congress to pass the SAFE Banking Act this year to enhance public safety in the 38 states where cannabis is legal in some form.”

That bipartisan legislation has passed the House in some form seven times now, but it’s continued to stall in the Senate under both Republican and Democratic control. However, the reform is expected to be included in a forthcoming package of marijuana reforms that Senate leadership is finalizing.

Rep. Earl Blumenauer (D-OR) told Marijuana Moment in a phone interview on Tuesday that he believes leadership understands that “the inability to access safe banking actually poses a tremendous problem for minority entrepreneurs” in the industry, and that the status quo is “deadly.”

“There are hundreds and hundreds of robberies—dozens of instances of violence—and it falls heavily on people who don’t have the massive resources to be able to ride this out and to pay the premium that is attached to being forced to be all cash. I think they’re making real progress,” he said. “I’m confident that this is going to move forward in the lame duck session. And I think the prospects for passage are very high.”

Sen. Cory Booker (D-NJ) similarly said that he thinks Congress has a “good shot” of passing cannabis banking reform during the lame duck as part of the yet-to-be-filed legislation that’s being described as “SAFE Plus.” He was previously adamant about not touching the banking issue until comprehensive legalization is enacted, but he’s softened his tone in recent months and expressed interest in a compromise.

ABA’s new poll—which was conducted by Morning Consult and involved interviews with 2,211 adults from September 16-17, with a +/-2 percentage point margin of error—contains findings that are similar to past surveys that it’s commissioned.

In March, for example, ABA found that 65 percent of Americans think marijuana businesses should have access to financial services and 68 percent said Congress should pass reform to achieve that.

Meanwhile, the governor of Colorado and other top state officials like Treasurer Dave Young (D) sent a letter to congressional leaders this month reiterating their interest in having lawmakers pass the Secure and Fair Enforcement (SAFE) Banking Act from Rep. Ed Perlmutter (D-CO).

Members of the National Association of State Treasurers (NAST), including Young, also recently reaffirmed the organization’s support for a resolution voicing support for the SAFE Banking Act. Young told Marijuana Moment that the status quo has created a “21st century Wild West in which armed hold ups and storefront heists are becoming an all-too-common risk.”

Senate Majority Leader Chuck Schumer (D-NY), who is spearheading the SAFE Plus push, separately spoke about the banking issue at a White House event last month, emphasizing that he was working on the problem, according to the House sponsor.

The conversation between Schumer and Perlmutter happened at an event on inflation reduction and happened to coincide with the National Cannabis Industry Association (NCIA) lobby days, with over 100 marijuana business leaders on Capitol Hill to push for the passage of the SAFE Banking Act.

In addition to banking, the expectation is that the in-the-works marijuana omnibus legislation that Schumer and bipartisan and bicameral officers are working on will include proposals on cannabis research, veterans medical marijuana access and more.

Perlmutter said at an NCIA-organized press conference that he’s increasingly tempted to “go to the nuclear option” in the House Rules Committee of “holding up” separate legislation like the National Defense Authorization Act (NDAA) in order to get the marijuana banking measure enacted.

The congressman and Sen. Jeff Merkley (D-OR), the Senate sponsor of the SAFE Banking Act, also outlined next steps for the cannabis banking reform at a briefing organized by the U.S. Cannabis Council (USCC) in July.

Cannabis Regulators of Color Coalition (CRCC) released a paper in August that outlined what they view as shortcomings of the standalone SAFE Banking Act and recommended several amendments to bolster its equity impact.

Booker said at an event organized by CRCC that the standalone legislation “requires changes” if it’s going to advance before cannabis is federally legalized.

The senator initially signaled that he was coming around to marijuana banking reform (contingent on equity provisions) at a Senate Judiciary subcommittee hearing in July that he convened as chairman.

Meanwhile, Perlmutter also said in a recent interview that he feels the introduction of the Senate legalization bill alone means that lawmakers have overcome a legislative “hurdle” that’s kept SAFE Banking from advancing in the chamber.

Another recent poll found that Republican voters are on board with a number of marijuana reform proposals—from medical cannabis legalization to expungements for prior marijuana convictions to letting states set their own policies without federal interference.

According to a survey from Independent Community Bankers of America (ICBA) that was released in September, a majority of American voters (65 percent) support allowing banks to work with state-legal marijuana businesses—and most people believe it will both improve public safety and promote social equity.