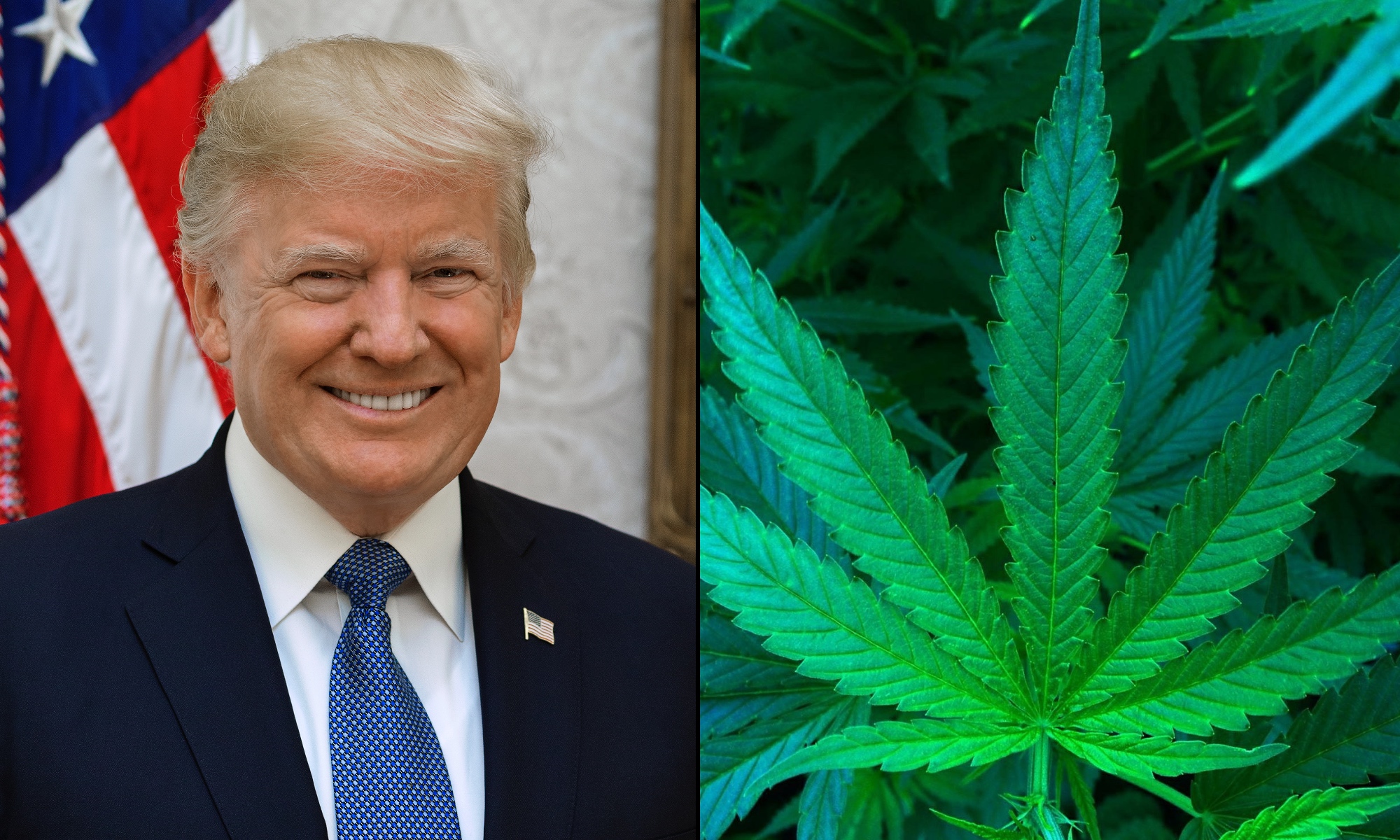 As one of his final acts in the White House, President Trump on Wednesday announced that he has granted clemency to dozens more people with marijuana and drug convictions.

The latest batch of pardons and commutations is the product of a push from advocates, celebrities and even some Republican lawmakers, who coordinated with White House staff over the course of Trump’s administration.

In a letter sent to the president in November, the coalition noted the president’s comments supporting bipartisan legislation to protect state cannabis programs from federal intervention and argued that congressional gridlock meant that those most harmed under federal prohibition would go without relief unless executive action was taken.

They also attached a list of people incarcerated in federal prison who they felt were most deserving of clemency—an addendum that was requested by the office of Trump senior adviser and son-in-law Jared Kushner. Now the White House has granted relief to several of those names.

One of the people on that list, Craig Cesal, was granted clemency for his cannabis conviction that landed him a life sentence.

“It feels like a new life, even though I don’t even know the terms yet,” Cesal, who received a call about the news on Tuesday evening from Ivanka Trump, the president’s daughter, told Marijuana Moment. “Just to know that I won’t have to go back to the prison after COVID abates is a huge relief.”

Cesal was released to home confinement in June.

Another recipient of the presidential action is Michael Pelletier, who has served 14 years of a life sentence over a federal marijuana conviction. He’s been a paraplegic since age 11 and is currently 64.

Weldon Angelos, an activist who received a presidential pardon for a federal marijuana conviction last month and has been involved in the White House talks about further clemency, told Marijuana Moment that he’s been encouraged by the progress that advocates have been able to make.

However, one person he fought especially hard for—Luke Scarmazzo, who was sentenced to 22 years in federal prison for operating a state-legal medical cannabis business in California—did not make Wednesday’s clemency list. Angelos said it’s possible he was passed up at the last minute, or that he will be granted relief in another round of clemency on Wednesday.

Although Trump would need to sign any grant of relief prior to the end of his term at noon, there is no requirement in federal law that it be publicly announced by that time in order to take effect.

“He was following state law—and they used his case to send the message,” Angelos said, of Scarmazzo. “He got charged under a kingpin statute, as though he was a cartel member, rather than providing medicinal cannabis for people that needed it.”

In all, 12 people with marijuana-related convictions were included in the latest round of clemency actions, and more than two dozen others with other drug offenses on their records were also granted pardons or commutations.

Of course, while Trump campaigned during his reelection bid as the criminal justice reform candidate, certain administrative actions have raised questions about that—such as the revival of federal executions for people on death row. He hasn’t done anything to proactively promote marijuana policy reform either, and has taken a number of hostile budget actions related to cannabis while also hiring several key officials who hold anti-legalization views.

Asked what message he felt resonated with the White House when it came to presidential clemency for nonviolent drug offenders, Angelos said he thinks Trump “is not a typical politician, and so he doesn’t make the same political calculations as other presidents.”

“I think Trump was also very skeptical of the government,” he said, as well as the criminal proceedings that land people in prison for lengthy sentences over minor crimes.

As with his last batch of pardons and commutations, it’s possible that these particular actions for people with drug-related convictions will be overshadowed by the slew of other clemency decisions that are rolling out, such as one for former Trump advisor Steve Bannon.

And at the same time that Angelos was pardoned last month, Trump gave clemency to allies and controversial figures such as Roger Stone, Paul Manafort, former Republican members of Congress and the team of four private military contractors convicted of killing 17 Iraqi civilians in the 2007 Nisour Square massacre.

But advocates—including Angelos and Alice Johnson, who also received a presidential commutation in 2018—are going to take their wins where they can get them.

Wednesday was “a day to honor mercy and justice, a day to celebrate the second chance given to many deserving individuals, and the families and communities who have been reunited with their loved ones,” Johnson said in a press release.

“While we celebrate today, let us not forget we still have laws in place that put nonviolent people in prison for life and there remain thousands behind bars today, who have paid their debt to society and who deserve a second chance to return home,” she added. “Today is just more fuel for the fire in my heart to continue to fight for those who have no voice.”

The 2020 letter that informed some of the new cannabis-related clemency actions was supported by Republican state lawmakers from Kansas, Maine and Missouri, as well as a former U.S. attorney, actor Danny Trejo, the New Haven, Missouri police chief and former New Mexico governor and former presidential candidate Gary Johnson. They were joined by representatives of groups like #cut50, Marijuana Policy Project and Law Enforcement Action Partnership.

Activists are cautiously optimistic that between the new Democratic Senate and the incoming presidential administration, this trend of drug war relief will continue. Despite a history of championing punitive anti-drug legislation during his time as a senator, President-elect Joe Biden has called those efforts a mistake and now backs some modest marijuana reforms.

Read the full list of new marijuana-related pardons and commutations below:

Ferrell Damon Scott – President Trump commuted the sentence of Ferrell Damon Scott. This commutation is supported by former Acting United States Attorney Sam Sheldon, who prosecuted his case and wrote that he “… strongly does not believe that [Mr. Scott] deserves a mandatory life sentence.” Ms. Alice Johnson, the CAN-DO Foundation, and numerous others also support clemency for Mr. Scott. Mr. Scott has served nearly 9 years of a life imprisonment sentence for possession with intent to distribute marijuana. Under today’s sentencing guidelines, it is likely that Mr. Scott would not have received such a harsh sentence.

John Knock – President Trump commuted the sentence of John Knock. This commutation is supported by his family. Mr. Knock is a 73 year-old man, a first-time, non-violent marijuana only offender, who has served 24 years of a life sentence. Mr. Knock has an exemplary prison history, during which he completed college accounting classes and has had zero incident reports.

Corvain Cooper – President Trump commuted the sentence of Mr. Corvain Cooper. Mr. Cooper is a 41 year-old father of two girls who has served more than 7 years of a life sentence for his non-violent participation in a conspiracy to distribute marijuana.

Way Quoe Long – President Trump commuted the sentence of Way Quoe Long. Mr. Long is a 58 year-old who has served nearly half of a 50-year sentence for a non-violent conviction for conspiracy to manufacture and distribute marijuana. Mr. Long has spent his incarceration striving to better himself through English proficiency classes and by obtaining his GED. Upon release, Mr. Long will reunite with his family and will be strongly supported as he integrates back into the community.

Michael Pelletier – President Trump commuted the sentence of Michael Pelletier. Mr. Pelletier is a 64 year-old who has served 12 years of a 30 year sentence for conspiracy to distribute marijuana. Mr. Pelletier has maintained a clear disciplinary record, has thrived as an artist working with oil paints on canvas, and has taken several courses to perfect his skill while incarcerated. Upon his release, Mr. Pelletier will have a meaningful place of employment and housing with his brother.

Craig Cesal – President Trump commuted the sentence of Craig Cesal. Mr. Cesal is a father of two, one of whom unfortunately passed away while he was serving his life sentence for conspiracy to distribute marijuana. Mr. Cesal has had an exemplary disciplinary record and has become a paralegal assistant and a Eucharistic Minister in the Catholic Church to assist and guide other prisoners. Upon his release, Mr. Cesal looks forward to reintegrating back into society and to contributing to his community while living with his daughter with whom he has remained close. Mr. Cesal hopes to be a part of her upcoming wedding.

Brian Simmons – President Trump commuted the sentence of Brian Simmons. Mr. Simmons has served 5 years of a 15 year sentence for a non-violent conspiracy to manufacture and distribute marijuana. Mr. Simmons has had an exemplary prison record and upon release will have strong support from his fiancée and his community.

James Romans – President Trump commuted the sentence of James Romans. Mr. Romans is a father and a grandfather who received a life sentence without parole for his involvement in a conspiracy to distribute marijuana. Mr. Romans has had an exemplary disciplinary record for the more than 10 years he has served, and has completed a long list of courses. He has already secured job opportunities that will help him successfully re-enter society.

Jonathon Braun – President Trump commuted the sentence of Jonathan Braun. Mr. Braun has served 5 years of a 10-year sentence for conspiracy to import marijuana and to commit money laundering. Upon his release, Mr. Braun will seek employment to support his wife and children.

Lynn Barney – President Trump granted a full pardon to Lynn Barney. This pardon is supported by Senator Mike Lee, as well as numerous notable members of the Utah business community. Mr. Barney was sentenced to 35 months in prison for possessing a firearm as a previously convicted felon, after having previously been convicted for distributing a small amount of marijuana. Since his release from prison, Mr. Barney has been a model citizen and has devoted himself to his work and children. He is described by his employer as an exceedingly hard worker and a role model to other employees.