“Many people and the media have been talking about a lot of increases in crime since Ballot Measure 110 was enacted but these data just don’t bear that out.”

Oregon’s decriminalization of drugs and addiction treatment programs are likely to forge ahead now that the election is over, giving Democrats key victories.

Both Republican gubernatorial candidate Christine Drazan and nonaffiliated candidate Betsy Johnson said they wanted Measure 110 repealed. Approved in 2020, it decriminalized possession of a small amount of illegal drugs with a promise to increase addiction treatment services.

Democrat Tina Kotek, who will be Oregon’s next governor, supports letting Measure 110 roll out and so do Democratic lawmakers, who will retain control of the Legislature.

Thousands of lives are at stake: Nationwide reports, including this one from Mental Health America, have consistently ranked Oregon as having the highest or one of the highest rates of people with mental health and addiction problems.

✔️Drug possession arrests have dropped by the thousands.
✔️$302 million in funds have expanded services tailored to fit people’s needs such as:
⚫️Low-barrier substance use disorder treatment that is evidence-based, trauma informed, culturally responsive and patient-centered.

Critics say the measure has done little to help while pushing crime rates up.

“There seems to be a lot of strong feelings about the measure,” said Alex Kral, an epidemiologist and researcher for RTI International, which is headquartered in North Carolina.

The nonpartisan nonprofit received a four-year grant from Arnold Ventures, Texas-based foundation, to study the impact of Measure 110, which is a first in the country. They visited four unnamed areas in Oregon over the summer—two urban and two rural—and interviewed 34 people, including 20 law enforcement officials. Police officials told the RTI researchers that their jobs have become more difficult since Measure 110 went into effect in early 2021

“They were used to being able to arrest people who use drugs and then at least threaten them with jail sentences unless they would give up the names or addresses of people who were selling them drugs,” said Alex Kral, an RTI epidemiologist and researcher. “They said they felt like it was making their job a lot harder in terms of trying to catch people who were selling drugs.”

Police officials said that drugs are a bigger problem now and have led to a spike in property crime in particular.

But their sentiments do not match reality, RTI found.

Because the latest crime statistics were not available, the researchers looked at available data for 9-1-1 calls as an indication of crime rates. It studied data from January 2018 through July 2022, giving them three years before the measure was enacted and a year and a half after, in Portland; Seattle, Washington; Boise, Idaho; and Sacramento, California to get a comparison with cities that have not decriminalized all illicit drugs. 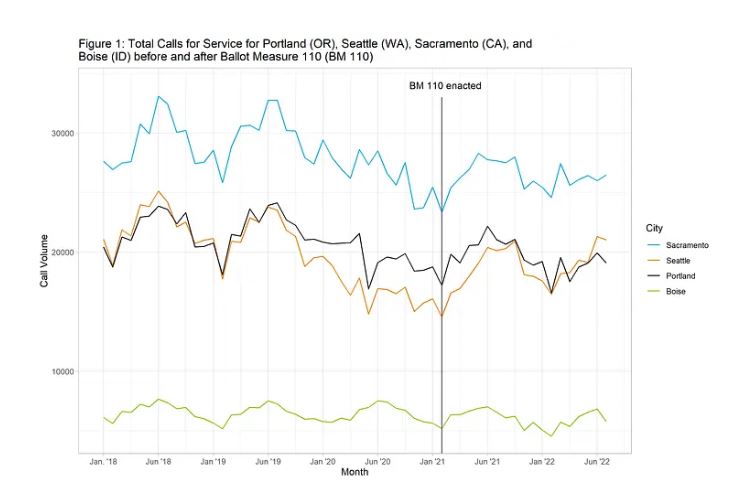 They found seasonal variations in all of the cities, with rates going up in summer and going down in winter, which Kral said is typical. But he said the researchers found that the public’s use of the 9-1-1 system did not change much after Measure 110 was enacted.

“I think many people and the media have been talking about a lot of increases in crime since Ballot Measure 110 was enacted but these data just don’t bear that out,” Kral said. 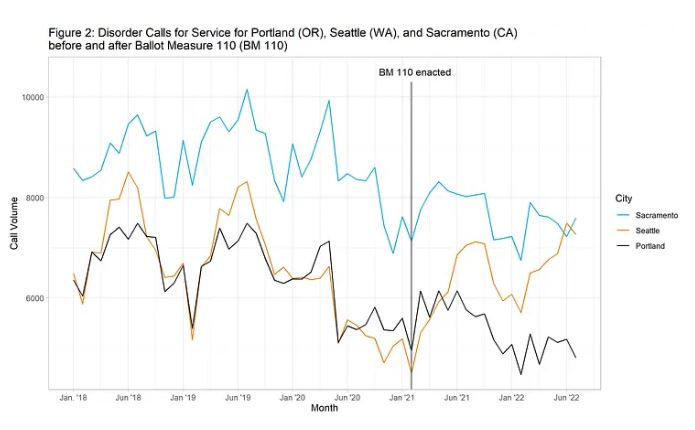 Property crime calls went up but Kral said that probably reflected the unrest over the killing by police of George Floyd in Minnesota.

“It’s a bit surprising because it’s going up in the fall, even up to the winter there, and that’s usually when you wouldn’t see it go up,” Kral said. “But then after last winter it essentially came back down.” 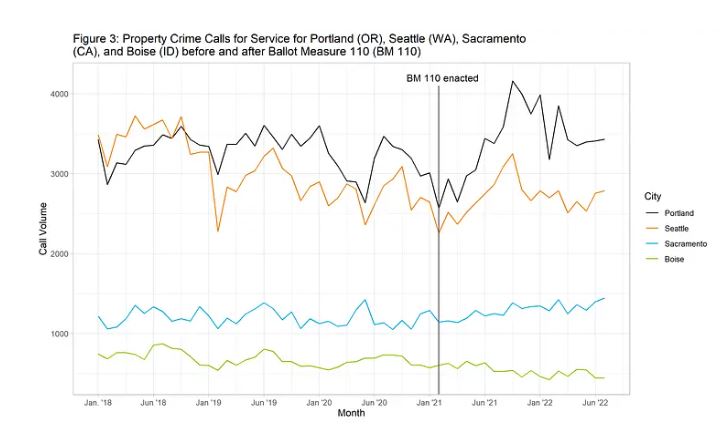 Besides crime, Kral said 9-1-1 calls reflect whether people think a crime occurred and whether police will respond. To differentiate the data from perception, the researchers have started to dive into arrest and other data.

“We’re going to be looking at all kinds of things from whether drug use has increased and whether health issues related to drug use have increased,” Kral said.

One key piece will be overdose data but those figures are often released a year after the deaths occur because medical examiners need to sign off on them, Kral said.

The researchers will also look at the impact of addiction and harm reduction services. The state is funding Measure 110 services with about $300 million in marijuana tax revenue through June 2023. It wasn’t until this summer that the Oregon Health Authority, which is overseeing the program, had approved Behavioral Health Resource Networks in every county. They offer a range of services, from health screenings and addiction treatment to help with housing and job support.

It will take months for that help to have an impact. RTI will be watching them over the next few years to see whether Oregon’s experiment works in the way it was intended.

“I don’t think any of us really know what to expect out of this,” Kral said. “There are a few other states that are looking at these kinds of things and many people are looking to Oregon.”

This story was first published by Oregon Capital Chronicle.