Details about legislative plans to legalize and regulate marijuana in New Zealand were released on Tuesday.

The three political parties who are part of a minority government coalition agreed to basic elements of a referendum to allow for the use, possession, sale and cultivation of cannabis for adults 20 and older, which is set to appear on New Zealand’s 2020 ballot.

Justice Minister Andrew Little confirmed in a press release that the measure will be binding—meaning that if voters approve the measure, the government will be obliged to follow through on the voters’s will. The proposal will allow for limited home cultivation and licensed areas where people can consume marijuana socially. It will also include restrictions on advertising.

“Officials are now empowered to draft the legislation with stakeholder input, and the Electoral Commission will draft the referendum question to appear on the ballot,” Little said in a press release. “The voters’ choice will be binding because all of the parties that make up the current Government have committed to abide by the outcome.”

“We hope and expect the National Party will also commit to respecting the voters’ decision,” he said, referring to the leading opposition party that is not part of the governing coalition.

“Cabinet has agreed to hold a binding referendum at the 2020 General Election to determine whether personal use of recreational cannabis should be legalised,” he wrote in an executive summary of the plan. “If the binding nature of the referendum is to be meaningful it will be necessary to be as clear and certain about the outcome of a ‘yes’ vote as possible.”

“The referendum question should provide voters with a clear choice on this important matter,” he said. “Also, there may be merit in allowing for the public education in the lead up to the referendum to better understand the final regulatory model that is adopted.”

Little outlined four separate referendum options for the Cabinet to choose from. It appears that parties agreed on the option that reads as follows:

“A question referring to an exposure draft piece of legislation that outlines the suggested regulatory model for cannabis but was not introduced into the House until the result of the referendum was known: ‘Do you support legalising the personal use of recreational cannabis in accordance with [published draft legislation]?”. This exposure draft would be provided in confidence to limited stakeholders for consultation and a final exposure draft that would be the subject of the referendum would follow.”

Little argued that simply decriminalizing cannabis would “impede the ability to control quality of products” and “any of the harm minimization associated with removing criminal elements.” Legalizing and regulating marijuana, on the other hand, would create a “controlled and tightly regulated market” that would allow the government to “steer market behaviour towards achieving the objective of minimising harm, while providing safe and legal access to cannabis.”

Here are the primary and secondary goals of the proposed referendum, as Little outlined in a 30-page briefing document:

Address the wellbeing of New Zealanders and harm reduction—the model should minimise harms associated with cannabis, such as health-related harm, social harms and harm to youth.

Lower the overall use of cannabis over time through education and addiction services – with a particular focus on lowering the use amongst youths by increasing the age of first use. Revenue raised through the regulation of cannabis should contribute to relevant health-related measures.

Disempowering the gangs and the illegal trade in cannabis;

Lowering the prison population over time and lowering the number of New Zealanders (especially Maori) whose future opportunities are negatively affected by cannabis use charges;

Ensure product safety and control of THC levels via legislation and regulation;

Be consistent with the rule of law – the model should uphold New Zealand’s constitution. It should also minimise opportunities for the illicit market and be clear and easy to follow;

Tailored and workable for New Zealand – the model should recognise and reflect our cultural practices and the values of New Zealand society so that it can be accepted by New Zealanders;

Fiscal sustainability – the model should seek to fund mechanisms that directly address cannabis-related harms, while also aiming to lower use over time.”

Chlöe Swarbrick, a Green Party member of Parliament who joined Little at Tuesday’s presser, released a video celebrating the development.

Aotearoa New Zealand could be the first country in the world to nationally legalise and regulate cannabis through a vote of the people. Here are the details. @NZGreens pic.twitter.com/GbeZKV2V4q

“In line with a health-based approach, consumption will be limited to private spaces or to those that are licensed,” she said. “We are also guaranteeing that there is going to be no advertising because the last thing we want to do is open the door to big corporates and invite another ‘Big Tobacco’ or ‘Big Alcohol’ and replace the black market with some big corporate control.”

“This is, of course, massive news and the first solid piece of information we can give you guys on the cannabis referendum,” she added. “Over the next year and a half, I will be doing my utmost to get around the country and hear from all of you about how we can create the best possible piece of legislation.”

The proposal also calls for a licensing scheme that would “provide for safe spaces for people to use cannabis away from home.”

The timeline for steps toward drafting the legislation and ballot question were laid out by the justice minster as follows: 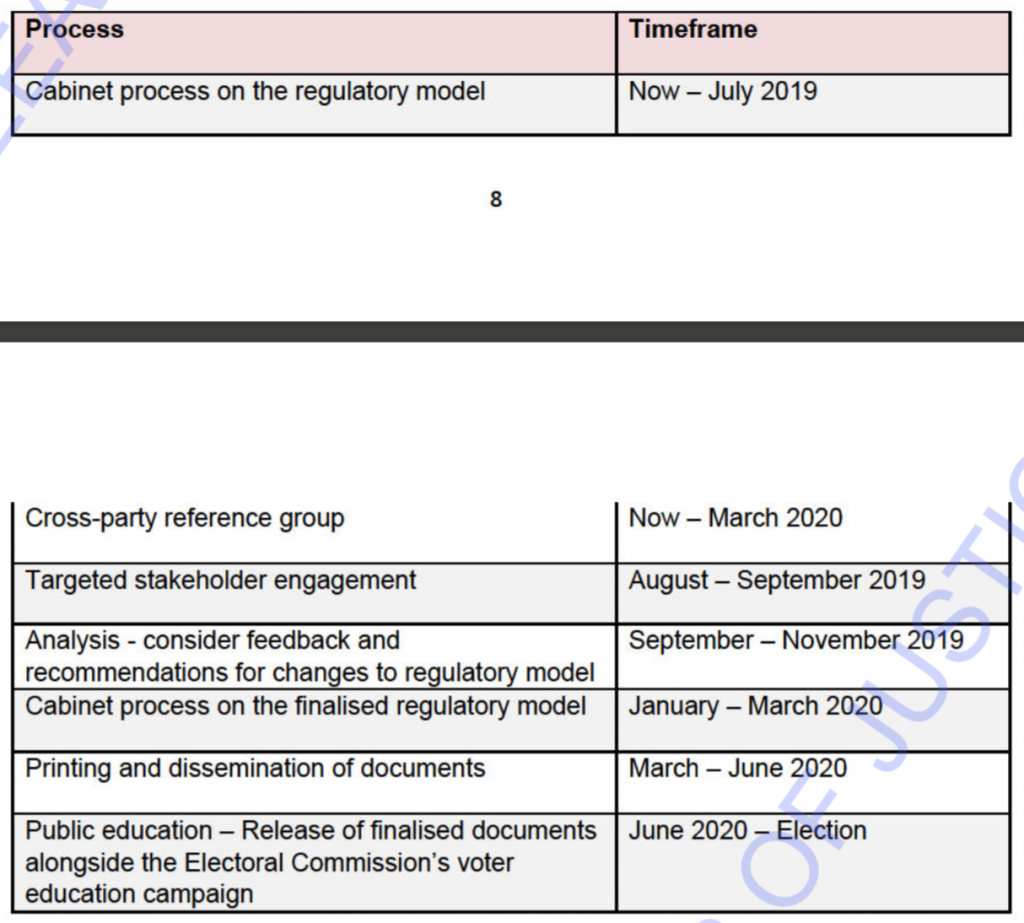 New Zealand has previously demonstrated interested in pursuing a public health-orientated approach to drug policy. Officials instructed law enforcement not to criminalize possession and consumption of synthetic drugs, which is at the center of a drug crisis in the country, and to instead treat such cases as public health concerns.

A poll released in January found that 60 percent of New Zealand residents would approve a referendum to legalize cannabis. Only 24 percent of respondents voiced opposition to the policy and 16 percent were left undecided.

Should the country opt to legalize and regulate marijuana, it would be following in the steps of Canada and Uruguay, which have already done so. Mexican lawmakers are also pushing ahead on a legalization plan.

“Subject to Cabinet decisions, any legislation to be enacted before the referendum that includes provisions relating to the overall system of cannabis, including the cultivation, sale and supply, and use of recreational cannabis in New Zealand would preferably be passed by December 2019, with March 2020 as an absolute deadline in order to undertake the referendum at the 2020 General Election,” Little wrote.