We already know 93 percent of Americans support legalizing medical marijuana. Now, thanks to new research, we also know a sizable majority of substance abuse clinicians do too.

But even though drug misuse professionals broadly back cannabis’s medical value, they also see risks associated with its use.

“While most participants agreed that medical marijuana should be legalized and that its ‘responsible’ use was ‘safe,'” the study concluded, “they also believed that it is often abused and has not been studied adequately. Consistent with prior research, we found that fewer addictions treatment professionals (approximately 70%) than members of the public supported legalization of marijuana for medical purposes.”

Generally speaking, many medical professionals who treat substance use disorders (SUD) believe abstinence from recreational drugs is the best practice. This new study, which published earlier last week in the Journal of Substance Use, aimed to get a better understanding of where they stood on the medical use of marijuana.

“Given that negative attitudes toward patients, regardless of the reason, may result in premature treatment termination and poorer quality care, it seems important to understand attitudes toward legalization of medical marijuana among SUD treatment professionals,” the researchers from Towson University in Maryland wrote.

Participants were asked to rate how much they agreed or disagreed with 22 statements, including:

They were also asked to share their personal history with cannabis and whether or not they knew anyone who had used medical marijuana.

A total of 966 addiction clinicians completed the survey between February and May 2018. They were identified through professional certification boards in Alaska, Kansas, Nebraska, New Jersey, North Carolina, Rhode Island, West Virginia and Wisconsin.

Additionally, most respondents thought marijuana should be legalized for medical purposes and that its use was safe, though only 38 percent said it was “not detrimental to one’s health.” Sixty-four percent said they believed medical cannabis is often abused. 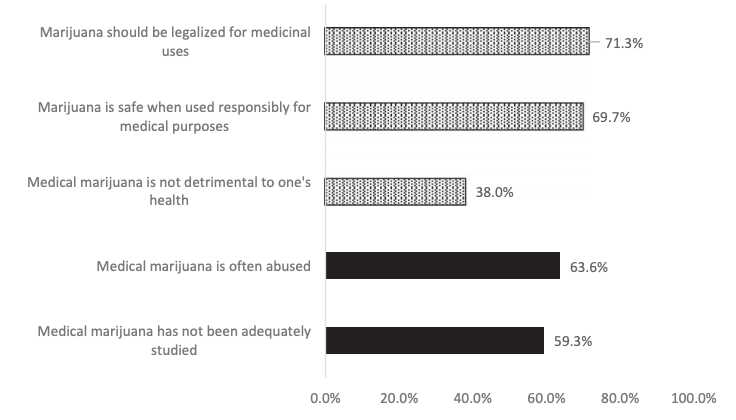 Via Journal of Substance Use.

Interestingly, however, many participants agreed that cannabis (including products that contain the cannabinoid CBD) could help with symptoms associated with addiction, such as anxiety and insomnia. While 70 percent said consuming marijuana is “trading one addiction for another,” most also thought it was acceptable for a person in SUD treatment to use medical marijuana.

Among the factors that appeared to influence participants’ attitudes toward medical marijuana were age—younger professionals were more open to the idea—past experience consuming cannabis and personal knowledge of someone who’d used cannabis for therapeutic purposes. Providers on the East Coast also viewed medical marijuana more favorably than in other parts of the country.

“These mixed attitudes may actually reflect a healthy skepticism,” researchers conclude. “That is, if the current trends continue, addictions treatment professionals may be poised to both accept medical marijuana legalization and to handle any associated negative consequences.”