The national marijuana dispensary chain MedMen has temporarily closed down all of its stores after several of its Los Angeles-based locations were looted over the weekend. While the company strongly condemned the looting, it said it recognizes the tragedies that led up to the incidents and is offering to support its black employees during this time.

Businesses in cities across the country have been impacted by outrage over recent police killings of black Americans. That includes George Floyd, whose death at the hands of a Minneapolis police officer ignited mass protests, some of which have been followed by looting.

In an internal memo to MedMen employees that was obtained by Marijuana Moment, the company said that its locations in downtown Los Angeles, West Hollywood and Beverly Hills “were heavily damaged, as were a number of other businesses, including those in the cannabis community.”

“Effective immediately, we are temporarily closing all stores and the corporate office to protect the safety of our employees,” the memo states. “The safety of everyone in the MedMen family is the most important thing right now, and we are grateful to report that while our stores were damaged, our employees and security guards were unharmed.” 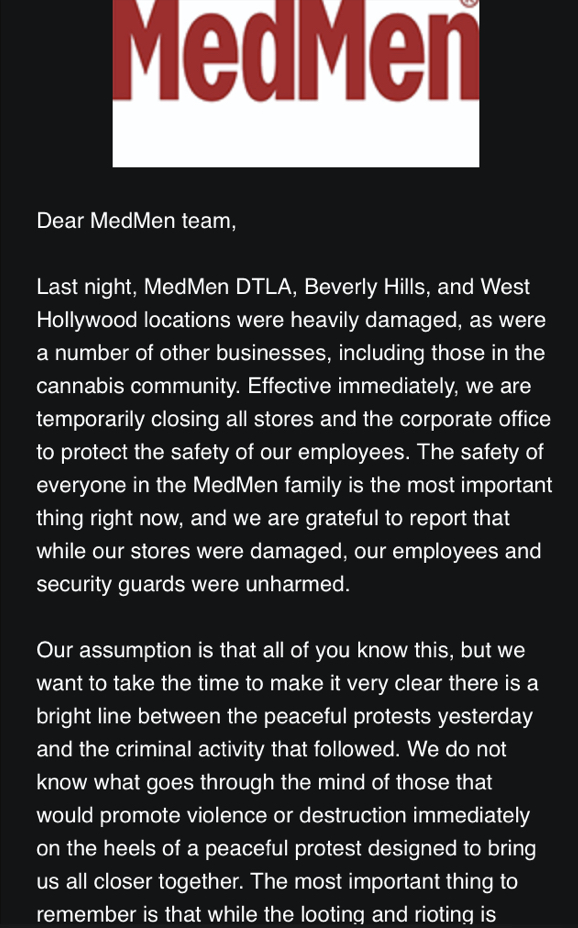 “Our assumption is that all of you know this, but we want to take the time to make it very clear there is a bright line between the peaceful protests yesterday and the criminal activity that followed,” it continues. “We do not know what goes through the mind of those that would promote violence or destruction immediately on the heels of a peaceful protest designed to bring us all closer together.”

But while that language largely contrasts with that of some other impacted marijuana businesses that have more clearly sympathized with people expressing outrage in the face of police killings, MedMen also extended a hand to its black workers and said it appreciates the circumstances that contributed to the situation.

“Regarding the events of the last week, we are heartbroken, outraged and horrified by the tragic events in our country and the continued violence and injustice perpetrated against the Black community. To our Black colleagues, if there is any way we can show up for you during this time, we would encourage you to email [the CEO’s office],” the company said. “In the meantime, we offer our deepest empathy, we are here to listen, we are here to help and we are here to stand with you as a MedMen family in any way we can.”

“To those fighting for social justice, MedMen stands with you. The horrifying treatment of our black colleagues and community must end,” MedMen added in a statement to Marijuana Moment. “Systematic oppression and inequality must end. We are committed to using our platform to help. We will rebuild and come back stronger in a way that makes our communities proud and advances justice and equality.”

A spokesperson said that the company is actively assessing its plan moving forward. While the representative initially suggested to Marijuana Moment that employees would continue to be paid during the temporary shutdown, he later said that the company “will take care of our employees as demonstrated by our response to COVID-19” but could not get into specifics about ongoing financial decisions.

All nationwide MedMen locations are currently closed. We apologize for the inconvenience. Please continue to check our website for updates.

Meanwhile, the rapper Berner, who owns the popular Los Angeles dispensary Cookies, said after his shop was looted that ensuring justice and addressing the problems underlying the protests is more important than the loss of merchandise.

“It’s extremely unfortunate what happened to our store tonight on Melrose. But as a human living in the world we’re living in today, I cannot expect anything less until justice is served,” he said. “We can rebuild our store, but you cannot bring someone back to life.”

Debby Goldsberry, the executive director of the dispensary Magnolia Wellness Oakland, struck a similar tone in a Facebook post about their experience being looted. She said that while the property loss was extensive and will hit the small retailer hard financially, this “story is not about Magnolia Wellness. It’s about this nation, blistering in pain. It’s bubbled up, and can’t be stopped, no matter how much salve we put on it.”

“Our shop can be rebuilt, but the black lives taken by the police, again and again, are gone forever. Simply put, the police are murdering people right before our eyes, and the anger has boiled over. We saw it on camera, watching these men rampage through our space,” she wrote.

Kris Krane, president of 4Front Ventures, said one of the company’s Mission dispensaries in Chicago was also raided over the weekend.

“Despite the sadness and destruction, my support for the protests and the underlying goal of ending police brutality, systemic law enforcement reform, and societal recognition of the fundamental humanity of people of color in this country remains undeterred,” he said. “I stand with those protesting for human rights and justice, and understand why some feel so disempowered that they have no recourse but rage and violence.”

Cannabis shops from California to Oregon have impacted by looting in recent days.