One of the main promises of marijuana legalization is that the reform can help curb the illicit market by providing adults with lawful access to shops where products are tested and IDs are checked. But not all states have had the same experience in fulfilling that promise—and a new report suggests that local opt-out policies are key factors.

Leafly and Whitney Economics teamed up to analyze the relationship between opt-out laws and unregulated sales. The report, released on Thursday, found that states where cannabis shops are more widely available—without as many jurisdictional gaps—have proved far more effective at stamping out the illicit market.

For example, states where there are 20-40 marijuana dispensaries per 100,000 residents have seen the greatest success at competing against illicit sellers, with 80-90 percent of adults reporting that they purchase their cannabis from regulated storefronts. 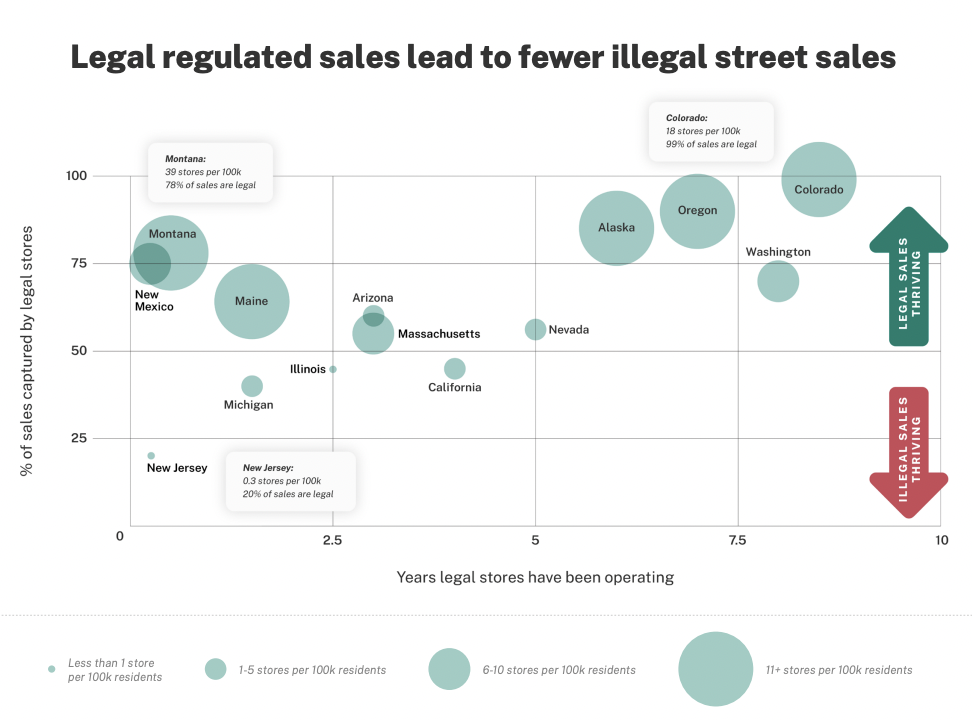 In contrast, states where there are fewer than 10 dispensaries per 100,000 residents tends to continue to see a thriving illicit market, where around 30-50 percent of sales happen in the legal marketplace, the report found.

Colorado, Oregon and Alaska stand out as examples of early-adopter states that implemented policies that enabled licensed marijuana shops to become widely accessible to adult consumers.

Colorado had 18 marijuana stores per 100,000 people at the time of the analysis in July, and virtually all recreational cannabis sales (99 percent) occur at licensed retailers. In Oregon, there are 19 shops per 100,000 residents, and the state also seems most of its sales (75 percent) happen within the regulated market. 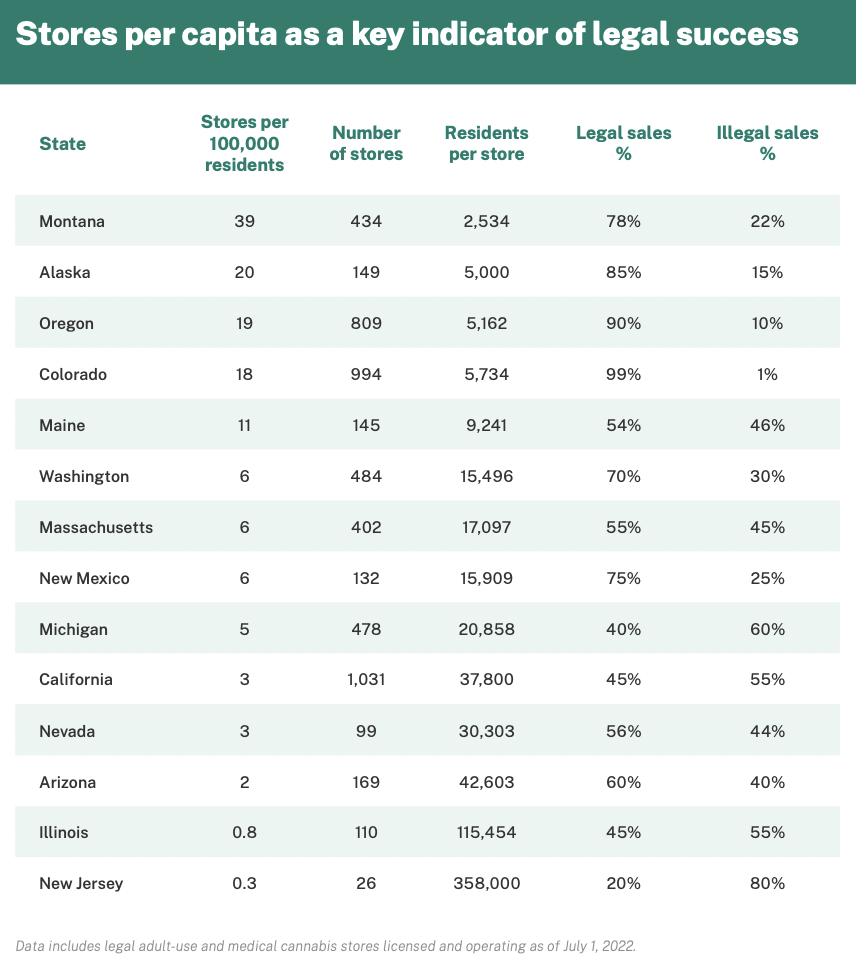 But other states like California—where local governments are able to opt-out of allowing most cannabis license types in their jurisdictions—have been less effective at mitigating the illicit market.

While a person 21 and older can easily find a plethora of California dispensaries in major cities like Los Angeles and San Francisco, more than half of the state’s cities and counties have banned all license types, creating a policy vacuum that’s empowered illicit sellers to continue servicing consumers outside of the regulatory framework.

California cannabis regulators have tried to draw attention to the problem, with officials releasing an interactive map earlier this year that shows exactly where marijuana businesses are being locally banned. Gov. Gavin Newsom (D) signed a bill this week that is partly meant to address the problem by preventing localities from prohibiting medical cannabis delivery services—but the issue is more systemic.

With just three marijuana shops per 100,000 residents in the Golden State, the legal market captures only 45 percent of cannabis sales, while the remaining 55 percent continues to go to the illicit trade, the new report shows.

“This report demonstrates that legal, regulated cannabis stores put illicit marijuana dealers out of business,” Bruce Barcott, Leafly’s senior editor and the lead author of the report, said in a press release.

“Fears surrounding local cannabis stores may prompt elected officials to prohibit cannabis companies in their towns,” he said. “But adults in every community already purchase and enjoy cannabis, legal or not. The cities and counties that skip out on cannabis are essentially voting to keep their local illegal marijuana markets in business.”

New York regulators are currently accepting applications for the first adult-use retailers in the state, and the state could soon serve as another example of how local opt-out policies influence market trends. While a large fraction of New York municipalities opted in to permit cannabis businesses, hundreds of cities elected to opt out ahead of a deadline early this year.

The lesson from the report is that those opt-out areas will likely continue to see people purchasing marijuana—but the incentive to shift to the regulated market will be tempered by the lack of conveniently located licensed access.

In New Jersey—where the recreational marijuana sales opened in April and where a majority of cities initially chose not to permit retailers following the reform implementation—there were 0.3 dispensaries per 100,000 people as of July. Accordingly, the illicit market has maintained dominance over cannabis sales, accounting for 80 percent of purchases. 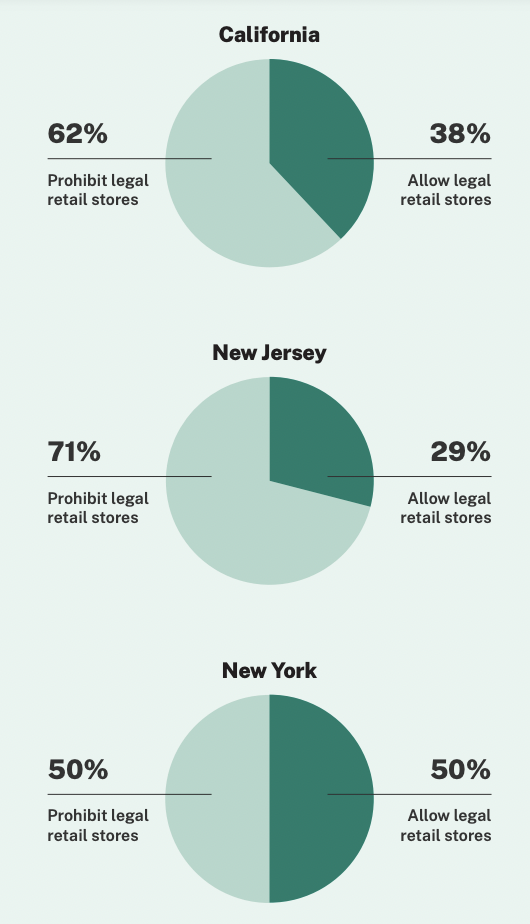 Another factor that’s likely hindering efforts to eradicate illicit sales is high state and local tax rates for products sold in regulated shops. Analysts and stakeholders have long maintained that imposing excess taxes on marijuana will deter people from making the transition to a legal marketplace, and so they’ve urged lawmakers to take that into account when crafting legalization policy.

“Access and taxes, those are the keys to customer migration to the legal market,” Beau Whitney, founder of Whitney Economics and a co-author of the report, said. “And right now we’re seeing illegal cannabis sales propped up by opt-out cities and counties.”

The new report is based on an analysis that looked at public licensing data from state marijuana regulatory agencies and population information from the 2020 U.S. Census. The percentage of cannabis sales from illicit versus legal sources was calculated “by comparing each legal state’s annual cannabis sales with that state’s Total Market Estimation (TME),” the reports methodology section says.

Not only do local opt-out decisions stand to benefit illicit marijuana sellers, but the report also found that areas that block regulated cannabis businesses are more likely to see public health issues related to untested products, miss out on job creation opportunities and lose revenue from local tax options.

“Legal cannabis regulation works. It puts illegal marijuana dealers out of business and gives minors fewer opportunities to access weed. It protects public health by keeping tainted products out of circulation,” the report concludes. “It allows law-abiding adults to abide to abide by the law, while creating local jobs and tax revenue. Opting in: It’s the right thing to do.”

A n earlier 2020 report commissioned by the California Hispanic Chambers of Commerce and Weedmaps similarly found that local bans on marijuana businesses in California have helped the illicit market thrive and deprived the state and municipalities of tax revenue that have been made all the more urgent in order to offset economic losses caused by the coronavirus pandemic.