Religious people are significantly less likely to support legalizing marijuana compared to those who identify as atheists and other religiously unaffiliated groups, a new polling analysis from the Pew Research Center found.

While most surveys on the issue look at key demographics like political party affiliation, age and race, this latest report reveals a prominent schism between people of various Christian faiths and those who are atheist, agnostic or “nothing in particular.”

Religiously-affiliated people overall are less inclined to back fully ending prohibition, though still with a majority of 54 percent. The group least likely to favor adult-use legalization is white evangelical Protestants (44 percent) and the most likely supporters are black protestants (63 percent).

Fifty-three percent of Catholics are on board with legalizing cannabis across the board, though white members of the denomination are more likely to support the policy change than are Hispanic ones.

It’s worth noting, however, that while Christians are less inclined to back legalization compared to non-religious people, a majority of each group surveyed—with the exception of white evangelicals—still support ending prohibition.

Further, Pew notes that there is overlap between religious identify and political affiliation.

“Some religious groups differ from each other politically. For example, more than two-thirds of White evangelicals describe themselves as politically conservative or very conservative, compared with only 5% of atheists and 10% of agnostics,” Pew said. “And White evangelicals are more likely to be Republicans or Republican-leaning independents, while atheists and agnostics tend to align with the Democratic Party.”

“Ideology and party identification matter when it comes to views on marijuana, but they do not account for the religious differences described in this analysis,” the organization said.

The poll did not include demographic breakdowns of other religious groups outside of Christianity so it’s unclear if that trend holds for people who are Muslim, Jewish or Buddhist, for example.

Meanwhile, there are further divides on the issue among Christians, Pew found. For example, the frequency of a person’s church attendance seems to influence where they stand, with people who go to services more frequently being more likely to oppose legalization. 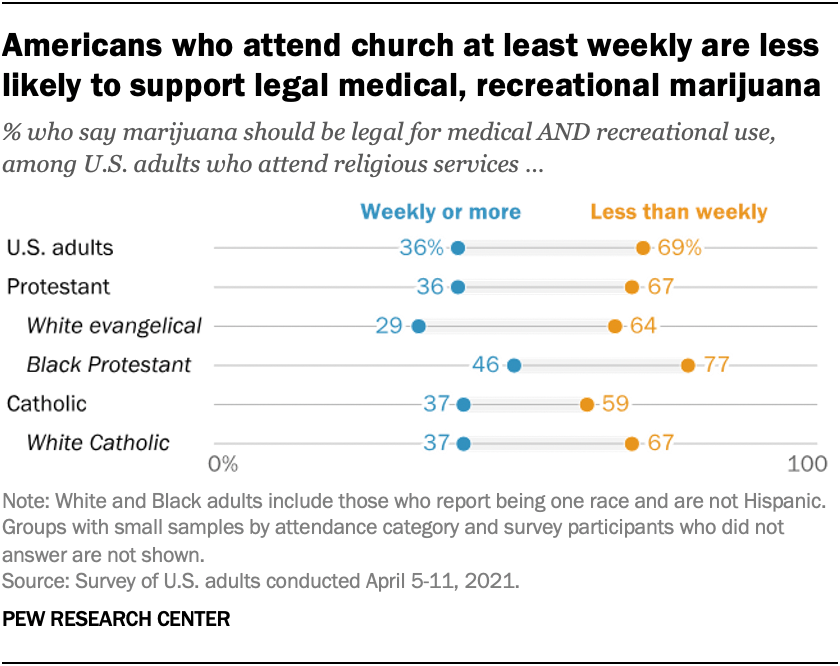 “For example, among White evangelicals who say they attend religious services at least weekly, 29% favor legal marijuana for both medical and recreational use, compared with 64% of White evangelicals who attend services less often,” the analysis says. “Black Protestants also are starkly divided by church attendance: 47% of those who attend services weekly or more support broadly legal marijuana, compared with more than three-quarters (77%) who go less often.”

People who are defined as “most religious”—meaning they attend church frequently, pray often and say religion is “very important” to them—are among the least likely to favor adult-use legalization. 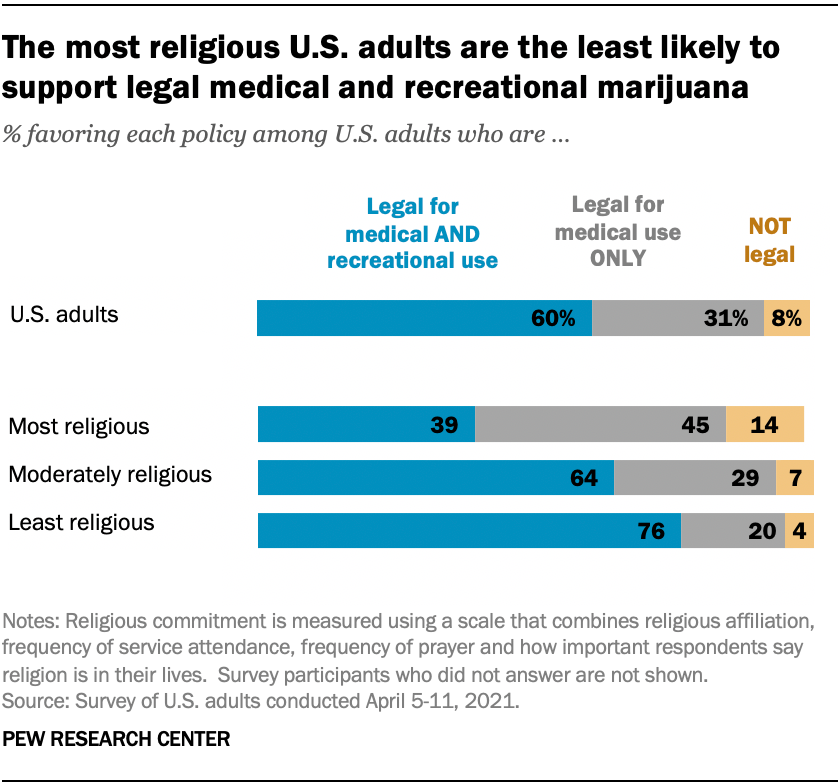 Pew’s survey on religion and marijuana policy involved interviews with 5,109 people from April 5-11.