The number of banks and credit unions servicing marijuana businesses dipped in the last fiscal quarter, according to new federal data.

That said, the Financial Crimes Enforcement Network (FinCEN) is no longer counting financial institutions that work with hemp-only companies since the crop was federally legalized, making the overall decline seem more pronounced compared to past quarters.

In the quarter ending in March 2020, there were 710 banks and credit unions that reported servicing marijuana businesses, according to the update that FinCEN, which is part of the Treasury Department, published this week. The previous quarter’s data showed 739 instances of financial institutions working with the industry as of December 2019.

In both of those reports, analysts identified instances where banks were filing suspicious activity reports, or SARs, for companies that only dealt with legal hemp and excluded them from the updates.

Of the 203 financial institutions that “indicated that they were providing banking services to hemp-related businesses,” 142 also worked with marijuana companies so they were kept in the report. But that means 61 hemp-only businesses were left out, unlike in past quarters. That’s the same number that were excluded from the end-of-2019 report, meaning that 29 fewer banks reported maintaining marijuana accounts at the end of March as compared to three months earlier. 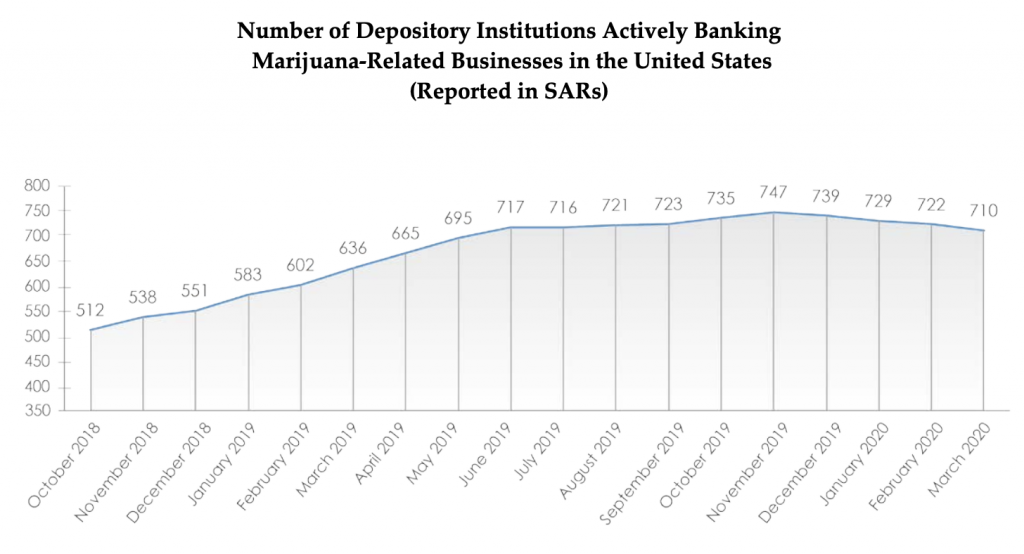 Under FinCEN guidance issued by the Obama administration in 2014 that remains in effect, banks and credit unions are required to submit SARs if they elect to provide financial services to marijuana businesses. In the years since, the number of depositories taking on marijuana clients has gradually increased—with the exception of this more recent downward trend.

When breaking down the latest data between types of financial institutions, FinCEN reports that the number of banks working with marijuana businesses is on a decline, while credit unions seem to be gradually welcoming more cannabis clients. 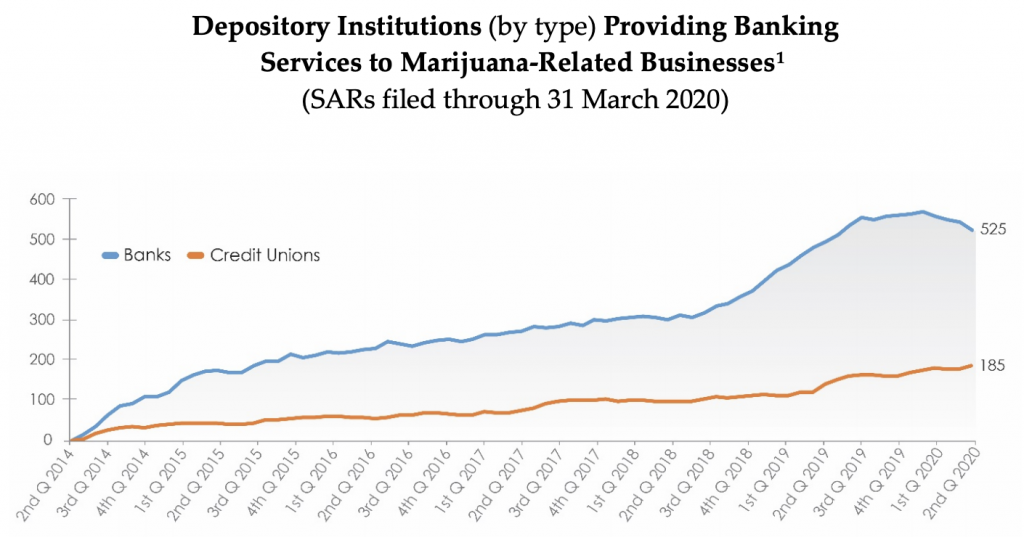 A spokesperson for the Credit Union National Association (CUNA), which has pushed for congressional legislation to protect financial institutions that service the marijuana industry, told Marijuana Moment that there are multiple factors such as delayed SARs filing that could account for the overall decline shown in the new numbers.

That said, CUNA has “heard of no specific trends that would explain it.”

Last year, FinCEN and other federal regulators issued guidance clarifying clarified that because hemp was federally legalized, banks are no longer required to automatically submit SARs for businesses that produce, process or sell the crop and products derived from it.

“The guidance states that because hemp is no longer a controlled substance under federal law, banks are not required to file SARs on these businesses solely because they are engaged in the growth or cultivation of hemp in accordance with applicable laws and regulations,” FinCEN said in this latest update. “The guidance further notes that for hemp-related customers, banks are expected to follow standard SAR procedures, and file a SAR if indicia of suspicious activity warrants.”

Some in the industry expected to see a sizable spike in the number of banks that work with marijuana firms after the House of Representatives passed a bill last year that would protect financial institutions from being penalized for doing so by federal regulators. Even though the legislation has stalled in the Senate and has not yet been enacted into law, the bipartisan margin of support it got in the House has been seen as a signal that formal federal changes are likely on the way.

“I suppose there could be several factors at play, the biggest of which would probably be market contraction because of the economic downturn and risk-aversion on the part of banks,” he said. “I think the latter could be attributed to both the pandemic and the fear of potentially getting wrapped up in an antitrust investigation or something similar (since word of those investigations was making the rounds a couple months ago and created some nervousness in the industry).”

“Regardless of the causes, the effect is detrimental to cannabis businesses that are already struggling and is just one more reason the Senate must approve banking reform without delay,” he said.

House Democrats passed the cannabis banking legislation a second time last month as part of a coronavirus relief bill. As with the standalone marijuana financial services legislation, the Republican-controlled Senate has not followed suit.