A federal court is ordering the Drug Enforcement Administration (DEA) to respond to a lawsuit concerning the status of applications for research-grade marijuana manufacturers.

Researchers filed a suit against the agency last month, arguing that the quality of cannabis supplied from the nation’s only federally authorized cultivation facility is inadequate and that additional manufacturers are necessary to increase the diversity of marijuana for research purposes.

DEA said in 2016 that it was accepting applications for such facilities but has so far declined to act on the dozens it has received. The Scottsdale Research Institute (SRI), which submitted an application to grow its own cannabis in order to conduct clinical trials on marijuana’s potential to treat symptoms of post-traumatic stress disorder, is seeking a resolution through the courts.

On Monday, the U.S. Court of Appeals for the D.C. Circuit handed SRI an initial procedural victory, issuing an order that DEA “file a response to the amended mandamus petition, not to exceed 7,800 words, within 30 days of the date of this order.” 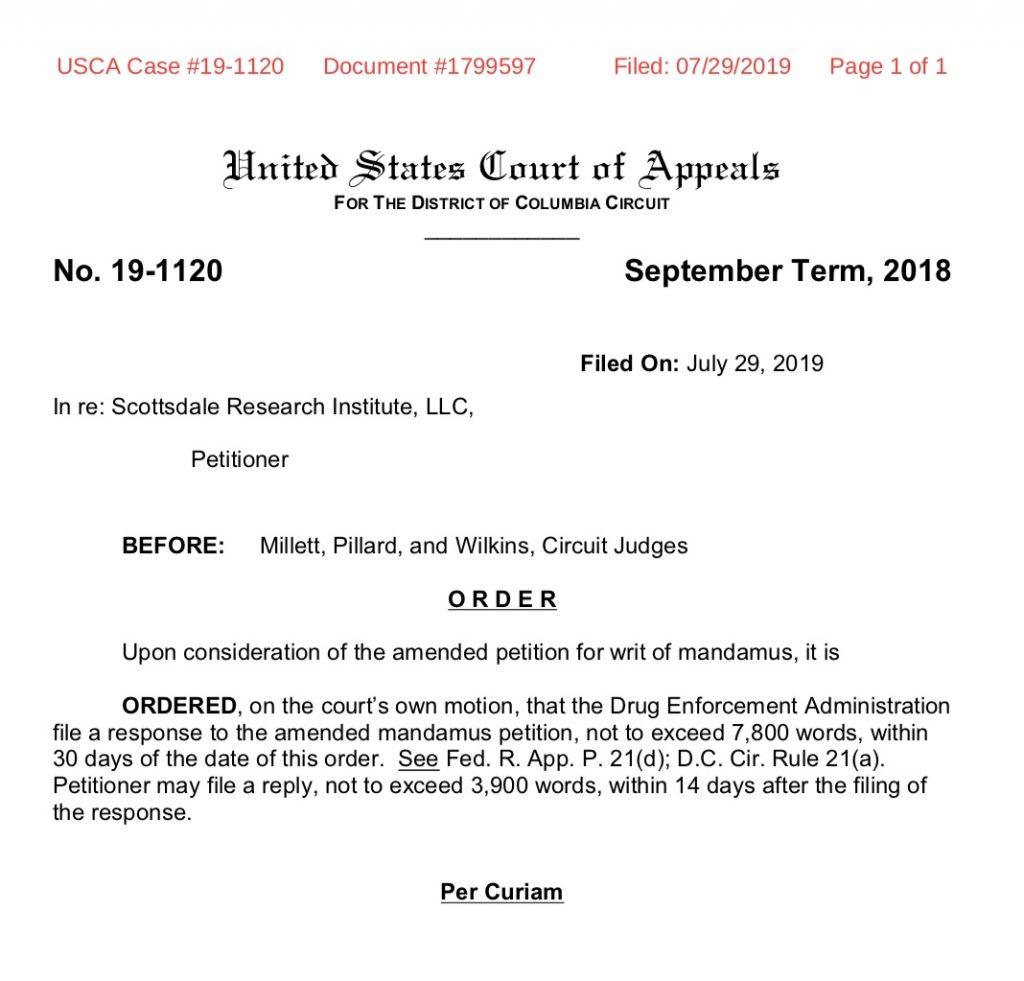 “Despite publicly soliciting applications back in August of 2016, DEA has acted none of them,” SRI said in a press release. “It has never offered any coherent explanation for this delay, other than to say it is still working through the process and these applications are still under review.”

“Hopefully, DEA will finally explain, in a court-filing available for public inspection, the answer to this question that has frustrated everyone.”

SRI isn’t alone in its frustration over the quality of marijuana produced at the University of Mississippi, the site of the only approved cannabis manufacturer in the country. Studies have found that the marijuana produced at the facility is chemically closer to hemp than products available in state-level commercial markets, raising questions about existing federal research into the plant.

DEA delaying the application process is “unlawful, unreasonable, and egregious,” SRI said in its amended petition.

“It contravenes the letter and spirit of the [Controlled Substances Act], seriously harms SRI, and hampers SRI’s efforts to help suffering veterans through clinical research,” the petition states. “Everyone—including the agency—agree that research is important and that the need for research generally is urgent. Here, DEA can act with little expenditure of resources.”

Attorney General William Barr has repeatedly said that he supports increasing the number of research-grade cannabis producers and pledged to look into the status of submitted applications, but no moves have been made since he took over for his anti-marijuana predecessor Jeff Sessions in February.

DEA is also facing pressure to answer questions about marijuana’s scheduling status as part of a separate lawsuit filed by a coalition of patients and advocates in May. In that suit, a federal court said the agency must “promptly” consider rescheduling and gave plaintiffs a procedural victory by stating that it would keep the case open until DEA took action.

SRI amended petition to DEA by Marijuana Moment on Scribd